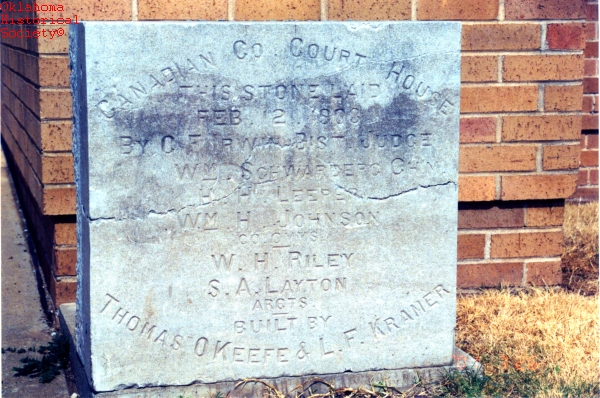 Situated in west-central Oklahoma, Canadian County is bounded by Kingfisher County on the north, Oklahoma and Cleveland counties on the east, Grady County on the south, Caddo County to the southwest, and Blaine County to the northwest. Canadian County lies mostly within the Red Bed Plains, a subregion of the Osage Plains physiographic region. The county's northwestern corner is situated in the Gypsum Hills. Drained by the North Canadian and the Canadian rivers, which cross the county from northwest to southeast, the county consists of 905.17 square miles of land and water. In 2010 the incorporated towns included Calumet, Mustang, Okarche, Piedmont, Union City, Yukon, and El Reno (the county seat).

According to a 1981 Oklahoma archaeological survey Canadian County had fifty-one known archaeological sites. Since that date other sites have been identified, with a total of sixty-seven reported at the turn of the twenty-first century. Three are attributed to the Paleo era (prior to 6000 B.C.), four to the Archaic era (6000 B.C. to A.D. 1), two to the Woodland era (A.D. 1 to 1000), and fifty-eight to the Plains Village era (A.D. 1000 to 1500).

In 1803 present Oklahoma was included in the region known as the Louisiana Purchase. Explorers and traders soon traversed the area. In 1820 Stephen Long followed along the Canadian River on his return reconnaissance trip across the central Great Plains. Three years later Thomas James followed the North Canadian River's course on one of his trading trips through present Oklahoma. In 1839 trader Josiah Gregg departed Van Buren, Arkansas, with trade goods and followed the Canadian River to New Mexico.

In 1859 the Caddo (of Louisiana) were transferred from the Brazos Reservation in Texas to central Oklahoma. Showetat, the last hereditary chief of the Caddo, established his camp on the north bank of the Canadian River about six miles west of present Union City. He is considered the first permanent resident of present Canadian County. The Wichita were relocated to the same area in 1861. However, they removed to Kansas during the Civil War, returning to present Canadian County in 1865. That year Jesse Chisholm blazed the trail that bears his name. It was used by Texas cattle herders from around 1867 to 1884. In 1867 the United States and the Plains Indians negotiated the Treaty of Medicine Lodge, Kansas, setting aside land west of the Caddo and Wichita for the Cheyenne and Arapaho who were removed from Colorado to present Canadian County in 1869.

In 1870 the Cheyenne-Arapaho Agency (later named Darlington Agency for the first Indian agent, Brinton Darlington) was established on the north bank of the North Canadian River. Numerous threats of violence between American Indians and cattlemen led to the opening of Fort Reno on the south bank of the river, opposite Darlington, in 1874. Fort Reno (NR 70000529) was listed in the National Register of Historic Places in 1970. Approximately five years after the fort was established, the first telephone communication in Oklahoma was tested using a telegraph line that had been installed between Fort Sill and Fort Reno.

Canadian County was settled by non-Indian settlers through three land openings, which occurred in 1889, 1892, and 1901. After the Land Run of 1889, El Reno bloomed overnight on the southern bank of the North Canadian River, and Reno City rose on the north shore. The Organic Act of 1890, creating Oklahoma Territory, designated the county as County Four, which consisted of the eastern half of present Canadian County. In 1892 the surplus Cheyenne-Arapaho lands were opened to non-Indian settlement, and the western half of Canadian County was appended at that time. The southwestern portion of the present county was added after the 1901 land lottery. In local elections the first residents chose El Reno as the county seat, over Reno City, Frisco, and Canadian City, and Canadian, after the Canadian River, was selected for the county's name. A one-story, frame livery stable served as the seat of county government until a new structure was built in 1901. Designed by W. J. Riley and Solomon A. Layton, the ornate courthouse served the county until a modern building was constructed between 1962 and 1964.

When the United States entered World War II in 1941, Fort Reno had been converted to a remount depot where horses and mules were trained for military service as pack animals. Two Army Air Corps training fields were opened in Canadian County during the war: Cimarron Field southwest of Yukon (now C. E. Page Airport) and Mustang Field south of El Reno. Both facilities employed county residents in supporting occupations. Post World War II the civilian jobs were easily transferred to the Federal Aviation Aeronautical Center in Oklahoma City and Tinker Air Force Base in Midwest City. The largest employer in the county was Mustang Public Schools, with six hundred employees. Corrections, another area of significant employment, had approximately 325 employees working at the Federal Correctional Institution in El Reno, one hundred workers at the Gary E. Miller Canadian County Children's Justice Center near Banner, and thirty-five people on the payroll at the Union City Community Corrections Center.

El Reno Junior College opened in El Reno in 1938 as a two-year extension of the El Reno High School. In 1941 it came under the jurisdiction of the Oklahoma State Regents for Higher Education. At the turn of the twenty-first century it operated as Redlands Community College. In 1970 the Canadian Valley Area Vocational Technical School opened on State Highway 66 between El Reno and Yukon to serve the needs for manual education in Canadian and Grady counties.

Transportation routes have progressed from trails and waterways to modern highways. In 1849 the California Road, from Arkansas to California crossing Oklahoma along the Canadian River, was heavily traveled by gold seekers going to California. An extension of the Chicago, Kansas and Nebraska Railway (later the Chicago, Rock Island and Pacific Railway) from Pond Creek in Grant County to Minco in Grady County passed through Okarche, El Reno, and Union City in 1890, providing the necessary transportation for successful farming operations. In the early 1890s the Choctaw, Oklahoma and Gulf Railroad (later the Chicago, Rock Island and Pacific Railway) operated an east-west rail line from Oklahoma City through Yukon and Cereal (now Banner) to El Reno. When the line was built westward through Calumet and Karns Spur to Geary in Blaine County, El Reno became a rail hub. For the next seventy-five years it was the regional headquarters for the Rock Island, a major employer in Canadian County. In 1904 the St. Louis, El Reno and Western Railway constructed a line between Guthrie and El Reno, passing through the Canadian County towns of Piedmont and Richland. The Oklahoma City and Western Railroad (later the St. Louis and San Francisco Railway) built a line from Oklahoma City to Chickasha in 1901. Their tracks, which passed through Mustang, provided passenger service until 1952.

Highway construction and paving received a major impetus during the 1920s, and Canadian County retained its characteristic of being a transportation hub with U.S. Highways 66 and 81 crossing at El Reno. U.S. Highways 270 and 281 intersect at Geary on the Canadian County and Blaine County line. State Highways 3, 4, 37, 92, and 152 developed later. In the early 1970s Interstate Highway 40 traversed the county from east to west.

A list of settlers claiming land in the Land Run of 1889 is replete with several different ethnic names. East-central Europeans dominated, especially in the southeastern portion of the county around Yukon and Mustang. Their influence continues to enliven the area's culture with the annual Czech Festival held in Yukon each October. Other area celebrations honor the heritage of the Chisholm Trail and the legacy of onion burgers sold by laid-off railroad employees in El Reno.

The following (as per The Chicago Manual of Style, 17th edition) is the preferred citation for articles:
Thomas L. Hedglen, “Canadian County,” The Encyclopedia of Oklahoma History and Culture, https://www.okhistory.org/publications/enc/entry.php?entry=CA038.