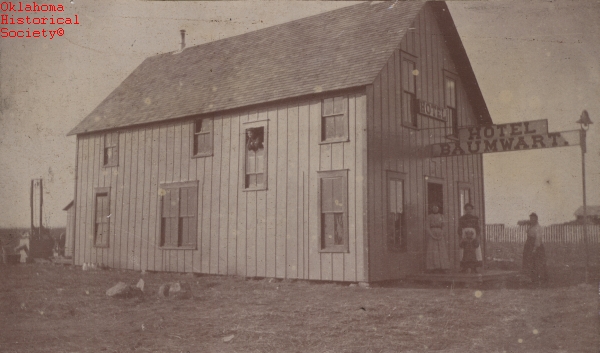 Located in northwestern Washita County, Canute is approximately sixteen miles west and nine miles north of Cordell on County Road N2080. The post office was established February 24, 1899. Historian George Shirk asserts that the town is named for King Canute of Denmark. The area first opened to non-Indian settlement in 1892, with the opening of the Cheyenne and Arapaho Reservation.

The earliest nearby community, located four miles west and one mile north of present Canute, was known as Keen. The name honored Robert Keen, who operated a general merchandise store. His establishment moved to Oak, just one mile west of present Canute, and in 1899 again moved, to Canute's future site. In 1902, as the Choctaw, Oklahoma and Gulf Railway, affiliated with the Chicago, Rock Island and Pacific Railway, built tracks through the area, the Great Southwest Townsite Company surveyed the land and held a lottery for town lots. Buyers paid ten dollars and received a random lot location, drawn from a box. That year Canute already had a bank, a cotton gin, and a general merchandise store. In 1902 the First State Bank of Canute received its charter, and in 1924 the State Banking Commission acknowledged the institution to be the oldest continuously operating state bank in Oklahoma.

The St. Francis of Assisi Catholic Church, established in 1898 and dedicated by Theophile Meerschaert in 1901, was located three miles southeast of the present community. Considered to be western Oklahoma's mother parish, the original church served ten towns in five counties. In 1926 the Roman Catholic Church founded Holy Family Church in Canute. In 1970 the congregations of St. Francis, Holy Family, and St. Joseph's Church in Elk City consolidated as St. Matthew Catholic Church, locating in Elk City.

By 1904 the Canute Banner reported that the town had two newspapers, two hotels, three doctors, a buggy works, a carpenter shop, a lumberyard, two cotton gins, two hardware and implement dealers, two livery stables, a drugstore, two saloons, a blacksmith shop, three general merchandise and grocery stores, two furniture stores with funeral supplies, and a music store as well as several attorneys, real estate businesses, two banks, a photographer, and an auctioneer. On October 10, 1898, the Canute school district became the first consolidated school district in Washita County when three school districts, along with Canute District Number Ninety-seven, were dissolved and combined to form the Canute Consolidated School District Number One. In 1930 the town had a population of 366.The count remained relatively stable for four decades. The U.S. Census recorded 370 residents in 1960, and the peak of population was 676 in 1980.

Agriculture has been Canute's economic foundation, as it has for many western Oklahoma towns. The town was located on historic U.S. Highway 66 and in 1994 the Canute Service Station (NR 94001611) was listed in the National Register of Historic Places. The 2000 population stood at 524, and in 2010 the census counted 541.

The following (as per The Chicago Manual of Style, 17th edition) is the preferred citation for articles:
Wayne Boothe, “Canute,” The Encyclopedia of Oklahoma History and Culture, https://www.okhistory.org/publications/enc/entry.php?entry=CA051.