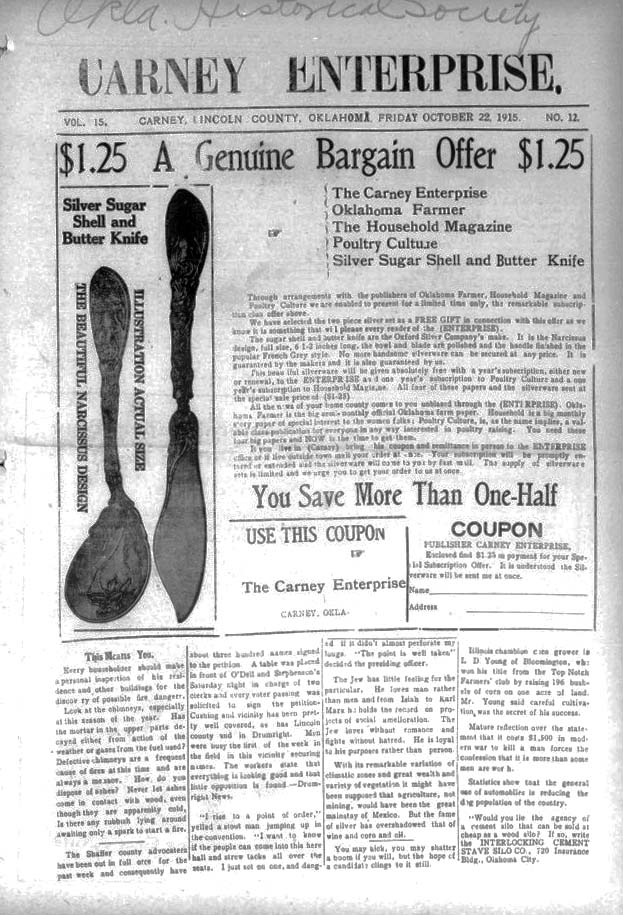 Located in Lincoln County, Carney is situated one mile east of U.S. Highway 177 on State Highway 40A. The town was originally a camp known as Cold Springs, between Guthrie and Chandler on land in the Iowa Reservation. The name was changed to Carney for Carney Staples, who had helped survey the area in 1871. After the land opening on September 22, 1891, a post office was established on April 9, 1892, with Staples's wife, Addie, as postmaster. Carney saw quick growth after two railroads, the Missouri, Kansas and Texas Railway and the Fort Smith and Western Railroad, served the town by 1904. The first bank opened in 1902, and a two-story, red brick schoolhouse was built in 1910. As a progressive town of 260 residents it passed a one-cent sales tax the same year, the first municipality in Lincoln County to adopt such a measure.

By 1920 the population had grown to 367. Like many rural towns Carney suffered hard times due to drought and the Great Depression, with the population declining through the 1950s to a low of 227. Newspapers informing Carney's residents have been the Enterprise, the Record, and the Weekly Citizen. In 1933 an unknown folk artist created two unusual concrete sculptures that still stand. Surveyed by Save Outdoor Sculpture, a joint project of Heritage Preservation and the Smithsonian American Art Museum, a life-size figure of a World War I doughboy is situated in a park in the center of old downtown, and "Rock of Ages," a statue of a praying woman, is located nearby.

At the turn of the twenty-first century Carney's economy improved due to its location in an oil and gas production field that stretched through central Oklahoma. The population stood at 649, a 16 percent increase over the 1990 census. The town's trade center was clustered along both sides of U.S. Highway 177, a few blocks west of the original townsite. The school maintained grades kindergarten through twelve in buildings on a campus located at the south end of the old main street. The U.S. Census recorded 647 inhabitants in 2010.

The following (as per The Chicago Manual of Style, 17th edition) is the preferred citation for articles:
Jan Vassar, “Carney,” The Encyclopedia of Oklahoma History and Culture, https://www.okhistory.org/publications/enc/entry.php?entry=CA059.