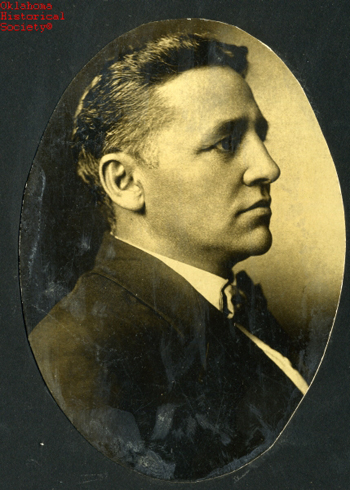 Of Cherokee and Chickasaw heritage, U.S. Rep. Charles D. Carter was born on August 16, 1868, near Boggy Depot, Indian Territory. His parents were Benjamin Winsor Carter and Serena Josephine Guy Carter, sister of Chickasaw Gov. William M. Guy. During his youth he lived in both the Choctaw and Chickasaw nations. He attended the Chickasaw Manual Training Academy at Tishomingo. From 1887 to 1892 he worked on a ranch and in an Ardmore mercantile establishment.

Carter served the Chickasaw Nation in various capacities: auditor of public accounts (1892–94), council member (1895), and superintendent of schools (1897). From 1900 to 1904 he was mining trustee of Indian Territory. In 1905 he became a partner in the Carter and Cannon Fire Insurance Agency. In 1906 he served as secretary of the first Democratic Party executive committee of the proposed state of Oklahoma.

At statehood Carter became the first person to represent Oklahoma's Fourth District in the U.S. House of Representatives, and he represented the Third District in 1915 after redistricting. He served in Congress from November 16, 1907, to March 3, 1927. In 1914 his visit to the school in Bugtussle inspired the career of future Speaker of the House Carl Albert. Carter worked on legislation affecting Oklahoma's Indians and played a role in keeping Indian homesteads under the protection of the federal government. He served as chair (1917–19) and ranking minority member (1919–21) on the Committee on Indian Affairs and as a member of the Appropriations Committee (1921–27). During his last years in Congress he chaired the Democratic Caucus. In 1926 he lost the Democratic primary to Wilburn Cartwright.

After leaving Congress, Carter returned to Oklahoma, and he served on the Oklahoma Highway Commission from 1927 to 1929. He died in Ardmore on April 9, 1929, and was interred there in Rose Hill Cemetery.

The following (as per The Chicago Manual of Style, 17th edition) is the preferred citation for articles:
Todd J. Kosmerick, “Carter, Charles David,” The Encyclopedia of Oklahoma History and Culture, https://www.okhistory.org/publications/enc/entry?entry=CA066.