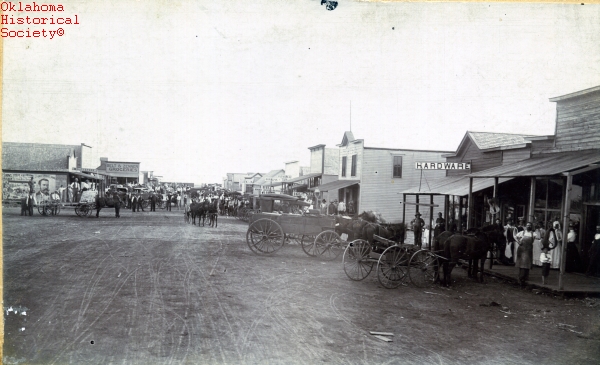 Located in southeastern Kingfisher County, Cashion is sited on State Highway 74F, on the Kingfisher-Logan county line, three miles south of State Highway 33. The community lies sixteen miles east-southeast of Kingfisher, the county seat. The original town was solely in Kingfisher County. In 1889 the area lay within the Unassigned Lands, or Oklahoma District, opened to settlement in April by land run. The surrounding Downs Township had 502 residents in 1900 and 652 in 1907.

Railroads' opportunity to transport the area's wheat to national markets made Cashion possible. In 1900 the Guthrie and Kingfisher Railway (after October 1900 owned by the Chicago, Rock Island and Pacific Railway) built a line eastward from the Rock Island line at Kingfisher at about the same time that the Guthrie and Western Railway (after 1902 owned by the Atchison, Topeka and Santa Fe) constructed a line westward from the Santa Fe line at Seward. The roads met at Cashion on land owned by the Guthrie & Kingfisher Improvement Company, William C. Grimes, president. Cashion had been surveyed and platted with company property completely surrounding it, so that any future additions could be controlled. On April 26, 1900, the company held a sale of lots. The first train arrived, from Kingfisher, on May 29, 1900, and the second, from Seward, on July 1. Named for Roy Vincent Cashion, a Hennessey boy killed at the Battle of San Juan Hill during the Spanish-American War, Cashion was incorporated in 1901.

Soon after its founding the town had two grocers, two saloons, a dry goods store, a livery and feed stable, about a dozen other retail businesses, and the First National Bank. Although a 1909 state gazetteer claimed 420, the first official census figures indicated 256 residents in 1907, and the 1910 census counted 289. By that time the community supported Christian, Congregational, Free Methodist, and Methodist Episcopal churches, two banks, two telephone exchanges, and a weekly newspaper. El Reno Mill and Elevator and Farmers Cooperative Gin and Mill companies handled the township's crops, primarily wheat. Newspapers serving the residents included the Cashion Advance from 1901 to 1907, the Citizen in 1909, and the Independent from 1908 through 1939.

Like most farming communities in Oklahoma, Cashion suffered in the post–World War I agricultural depression, compounded after 1929 by the Great Depression. The 1920 population stood at 296 but dropped to 291 in 1930. As agriculture faltered, the Santa Fe abandoned the local line in 1934; the Rock Island abandoned and removed its trackage in 1937. With no rail access, the community declined to 232 in 1940 and to an all-time low of 182 in 1950. Nevertheless, citizens secured their future by personally financing the construction of a one-hundred-thousand-bushel cooperative grain elevator in 1946 and by applying the same method for financing gas, water, and electric systems in the 1930s, 1940s, and 1950s. Until 1977 municipal utilities receipts obviated the need for ad valorem taxes.

Because the paving of State Highway 74F had been successfully promoted by local residents led by Elbert S. Stoner, mayor 1939 through the 1970s, regional farmers continued to trade there. The town expanded to 221 in 1960 and 329 in 1970. Growth was aided by the availability of jobs in nearby Kingfisher and Guthrie. Attempting to expand its tax base, in the 1970s Cashion nearly doubled its physical size by annexing several hundred acres, some of which was located in Logan County. The 1980 census reported 491 in Kingfisher County and 56 in Logan. The Logan County part of town continued to grow, so that by 2000, 491 residents lived in Kingfisher and 144 in Logan, making a total of 635 residents at the end of the twentieth century. The U.S. Census in 2010 counted a total of 802.

The following (as per The Chicago Manual of Style, 17th edition) is the preferred citation for articles:
Dianna Everett, “Cashion,” The Encyclopedia of Oklahoma History and Culture, https://www.okhistory.org/publications/enc/entry.php?entry=CA069.