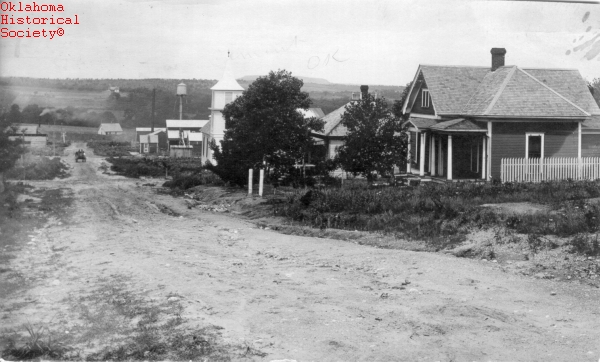 The community of Cement is located in southeastern Caddo County, Oklahoma. It is situated along U.S. Highway 277/State Highway 19, approximately fifty-one miles southwest of Oklahoma City. The town received its name in 1902 from workers at a nearby cement mill, built in 1901 by the Acme Cement and Plaster Company. The company hoped to make cement from indigenous gypsum rock. Instead, the crushed gypsum was used for plaster in the construction of houses. Gypsum was still being mined locally and was shipped as ore or in the form of sheetrock in 2002.

Cement was served by the St. Louis and San Francisco Railway. Gypsum mining and the oil industry have been mainstays of the town, along with farming and ranching. Area oil wells drilled as early as 1917 remain productive, and new wells are occasionally developed. Cement was a rowdy town until 1907 statehood brought prohibition. Outlaws had frequented the area due to its status of being a "no man's land." According to legend, the Jesse James gang left part of its loot at Buzzard's Roost, a small hill east of town. Frank James allegedly lived in Cement before he built a house near Fletcher in 1906. It has been reported that he rode the range from the Kechi Hills around Cement to the Wichita Mountains in search of wealth left behind by the gang. The Cement Historical Museum features James gang lore in the Jesse James Visitors Center located on the second floor of the museum building.

The following (as per The Chicago Manual of Style, 17th edition) is the preferred citation for articles:
Norma Rackley, “Cement,” The Encyclopedia of Oklahoma History and Culture, https://www.okhistory.org/publications/enc/entry.php?entry=CE002.