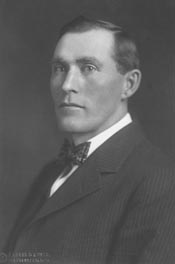 Thomas Chandler
(image courtesy of the U.S. House of Representatives).

Appointed revenue collector for the Delaware District of the Cherokee Nation in 1891, Chandler later served as Cherokee Nation townsite commissioner in 1895. A prominent farmer, businessman, and oil producer, he reportedly drilled the Cherokee Nation's first producing oil well on his allotment near Bartlesville. In 1899 he organized the Indian Telephone Company in Vinita for long distance service. From 1900 to 1907 he served as deputy clerk of the United States court for the northern district of the Indian Territory. During this time he studied law and was admitted to the bar in 1907. With statehood, he was named to the first Board of Public Affairs and as secretary secured Eastern State Hospital for Vinita. He participated in numerous organizations, including the Masonic order, Knights of Pythias, and Elks.

Long interested in Republican Party politics, Chandler was the first Indian to meet with Pres. William McKinley and was influential in allotment of Indian lands in Oklahoma. In 1916 Chandler sought Oklahoma's First District seat in the U.S. House of Representatives. Campaigning on an "America first" platform, the Craig County politician called for a protective tariff and vigorously opposed the proposed literacy test amendment to the Constitution. Although the election was contested by Democratic incumbent James S. Davenport, Chandler won the subsequent court case. In his first congressional term, he served on the Indian Affairs and Alcoholic Liquor Traffic Committees. It was ironic that Chandler was on the Indian Affairs Committee, because as an American Indian he still had a court-appointed guardian. He and Oklahoma colleagues W. W. Hastings and Charles Carter, who also served on the Indian Affairs Committee, were commended for their efforts in securing the best Indian appropriation bill ever passed. In addition, he labored to reduce taxes in the oil industry. Despite his efforts, Chandler was defeated for reelection in 1918.

Two years later he swept back into the position with the Republican Party landslide. As a member of the powerful Ways and Means Committee during the Sixty-seventh Congress, Chandler called for protective tariffs on oil as a way to protect the small producer. The congressman also was largely responsible for legislation that validated contested Indian property titles in Tulsa. Voters were not swayed, however, and he was defeated in 1922.

He retired from politics, returned to Vinita, and practiced law. During his later years he lived at the Vinita Hotel and was remembered as a "fine old southern gentleman." Chandler died on June 22, 1953, in Vinita and was interred in Fairview Cemetery.

The following (as per The Chicago Manual of Style, 17th edition) is the preferred citation for articles:
Carolyn G. Hanneman, “Chandler, Thomas Alberter,” The Encyclopedia of Oklahoma History and Culture, https://www.okhistory.org/publications/enc/entry.php?entry=CH003.