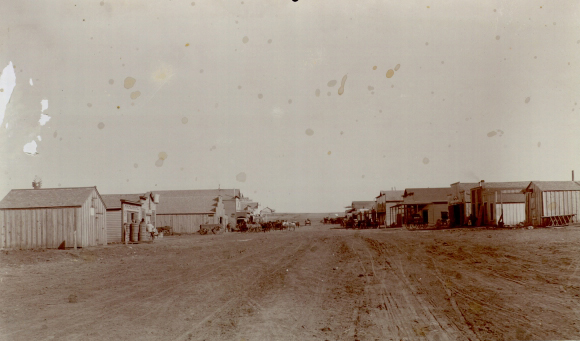 Cheyenne, the county seat of Roger Mills County, is located at the junction of U.S. Highway 283 and State Highway 47. Situated in the former Cheyenne and Arapaho Reservation, the area was opened to non-Indian settlers with the land opening on April 19, 1892. Named for the Cheyenne tribe, the townsite was surveyed and designated by a federal judge as the county seat of F County (became Roger Mills County in 1907). The town sprang up overnight, with three city blocks of businesses housed in tents, shacks, and dugouts. Within the first year Cheyenne took on the appearance of a permanent town, with a school, a bank, newspaper, saloon, hotel, courthouse, post office, and various stores. Located on the south side of the Washita River, the community is approximately one mile east of the site at which Lt. Col. George Custer's Seventh Cavalry attacked the camp of Peace Chief Black Kettle at dawn on November 27, 1868.

At 1907 statehood Cheyenne's population stood at 288, and it rose to 468 in 1910. The town was incorporated on January 4, 1909. Circa 1912 the townspeople raised the money and provided the labor to build a short line between Cheyenne and Strong City, the terminus of the Clinton and Oklahoma Western Railway. On February 14, 1914, the first train left Cheyenne. Principal outbound shipments were livestock, cotton, broomcorn, grain, and hay. The community grew and population numbers climbed to 826 in 1930, 1,070 in 1940, and 1,133 in 1950.

Cheyenne became a trade center for most of Roger Mills County and the Texas counties bordering on the west. The population briefly surged from 892 in 1970 to 1,207 in 1980 but dwindled to 948 in 1990 and to 778 at the turn of the twenty-first century. It grew to 801 in 2010. Cheyenne's economy and the surrounding area have remained strong due to the vigorous ranching and farming industries, to tourism, and to the production of fossil fuels. During the 1970s Cheyenne and the surrounding area began to reap the benefits of natural gas production in one of the nation's largest-volume gas fields. The mid-1980s saw a temporary decline in production, but resurgence began at the turn of the twenty-first century and continued to boost western Oklahoma's economy.

Tourism has become a significant part of the economy, due in part to the Washita Battlefield historic site, designated a National Historic Landmark in 1965 and listed in the National Register of Historic Places (NR 66000633) in 1966, and to the beauty of the natural environment in the more than thirty thousand acres of public lands comprising the Black Kettle National Grassland. That area is open to hiking, wildlife viewing, hunting, and fishing. Local land- owners supplement their incomes by providing lodging at hunting camps, guiding hunting parties, and offering other services to sports enthusiasts who visit the area seasonally to avail themselves of the extensive Rio Grande turkey, bobwhite quail, dove, and deer populations. Recognizing this source of economic benefit, Cheyenne, in cooperation with the county commission, encourages and assists the development of amenities that supplement tourism and capitalizes on local cultural heritage events and attractions.

Cheyenne's arts community is represented by several galleries located in town and in the surrounding area. In the City Park pioneer history is displayed in a collection of small museums, including a one-room schoolhouse, a small chapel, a military veterans' memorial exhibit, a wax figure exhibit, and a variety of historical exhibits showcasing colorful and historic local personalities and locally produced arts and crafts. Cheyenne is also renowned for its Old Settlers Reunion, held every five years to celebrate the 1892 land opening. At the turn of the twenty-first century the public school system, the Minnie R. Slief Memorial Library, the Cheyenne Star newspaper, and the Mignon Laird Municipal Airport continued to serve the community.

The following (as per The Chicago Manual of Style, 17th edition) is the preferred citation for articles:
Dorothy Alexander, “Cheyenne,” The Encyclopedia of Oklahoma History and Culture, https://www.okhistory.org/publications/enc/entry?entry=CH027.