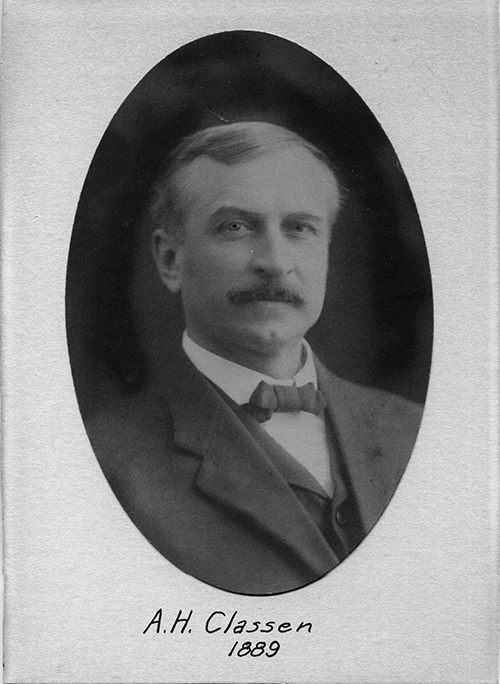 Oklahoma City civic leader and land developer Anton H. Classen was born October 8, 1861, at Pekin, Illinois. Named after his German-born father, Classen received a common school education in Illinois and studied law at the University of Michigan. Two years after he graduated from college, he made the 1889 land run into the Unassigned Lands of Oklahoma Territory, living for a brief period in Guthrie. The town had too many lawyers, so he sought opportunity in nearby Edmond. While practicing law, Classen edited of the Edmond Sun newspaper and promoted the location of Oklahoma Territory's first normal school at Edmond.

In 1897 Classen, a Republican, was appointed by Pres. William McKinley as receiver in the U.S. Land Office in Oklahoma City. Classen quickly involved himself in the development and beautification of the city. Speculating in land, he bought farmland contiguous to the city limits and organized numerous housing additions, the first being Highland Parked Addition (now Heritage Hills historic district), established in 1900. To enhance his lots he planted trees and set aside a parcel of land for parks. In 1902 he and John W. Shartel organized the Metropolitan Railway Company (later the Oklahoma City Railway Company), a mass-transit system that benefited their real estate interests because the lines connected their additions to downtown Oklahoma City.

While working at the U.S. Land Office, Classen met his future bride, Ella D. Lamb, whom he married in January 1903. In 1919 he donated land for a school named in his honor. Before his death Classen was president of the Oklahoma Children's Home Society, director of the Young Men's Christian Association, and director of the Oklahoma Forestry Association. He was affiliated with the Oklahoma City Masonic Lodge Number 36 and had been an active member and director of the Oklahoma Historical Society. On December 30, 1922, Classen died at his home at 626 West Fourteenth Street. At the turn of the twenty-first century Classen Boulevard and Classen School of Advanced Studies (formerly Classen High School) in Oklahoma City remained as tributes to one of the city's prominent developers.

The following (as per The Chicago Manual of Style, 17th edition) is the preferred citation for articles:
Linda D. Wilson, “Classen, Anton H.,” The Encyclopedia of Oklahoma History and Culture, https://www.okhistory.org/publications/enc/entry.php?entry=CL006.