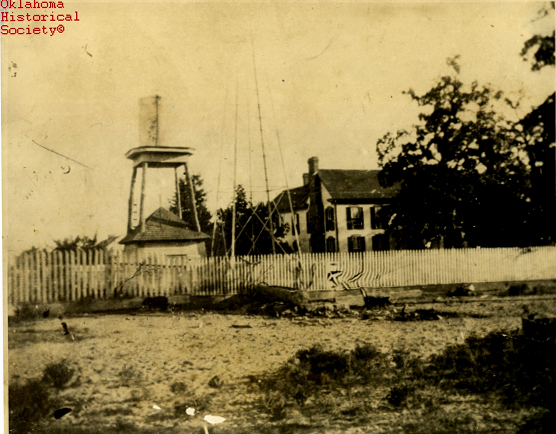 In 1853 the Chickasaw Nation granted Benjamin Franklin Colbert (1826–93), a Chickasaw citizen, permission to operate a ferry across the Red River. Located at the border separating present Bryan County, Oklahoma, and Grayson County, Texas, three miles southeast of Colbert, the site was placed to accommodate travelers on the Texas Road. In the late 1840s Benjamin Colbert had moved to the area, and he raised cotton and ran cattle, utilizing slave labor. In 1858 this location became Indian Territory's last stop for the north-south run of the Butterfield Overland Mail. Colbert maintained the road and transported the stage and passengers across the river, free of charge. His house served as the station, and he provided food for travelers. Near the ferry, Colbert later built a large mansion named Riverside. During the Civil War Confederate forces often used the ferries.

After the war ended, the enterprise profited from cattle drives that originated in Texas. The townsite of Colbert sprang up around this operation. In 1872 the ferry business charged one dollar for a two-horse wagon, one dollar and twenty-five cents for a four-horse wagon, one dollar and fifty cents for six-horse wagon, twenty-five cents for a man and a horse, and ten cents a head for cattle or horses. Travelers had to pay to cross the river, whether or not they used the boats. Two hundred yards from the landing, on the Texas side, stood a store named the "first and last chance," selling among other things whiskey, which was banned in Indian Territory.

In 1872 the Missouri, Kansas and Texas Railway (or MK&T) built a company bridge across the Red River, absorbing some of ferry's business. In 1874 Colbert gained a federal charter to build his own toll bridge. Almost a year later a flood destroyed both the MK&T bridge and the wagon bridge, and the boats were put back in action. Colbert later sold his charter to the Red River Bridge Company, which he helped organize, and he served as its first president. In 1892 this company rebuilt the structure. Again in 1908 a flood destroyed it, and the organization quickly erected another bridge. This served as a toll bridge until in 1931 the "Red River bridge war," a standoff between Gov. William H. Murray and Texas Gov. William W. Sterling, led to the opening of a free bridge. Colbert's Ferry Site is listed in the National Register of Historic Places (NR 72001057).

The following (as per The Chicago Manual of Style, 17th edition) is the preferred citation for articles:
Larry O'Dell, “Colbert's Ferry,” The Encyclopedia of Oklahoma History and Culture, https://www.okhistory.org/publications/enc/entry?entry=CO018.