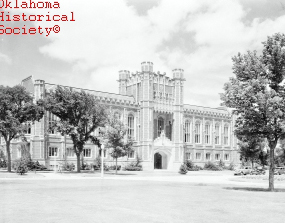 Public higher education in Oklahoma began shortly after the Land Run of 1889. Oklahoma Territory was established by the Organic Act passed by Congress on May 2, 1890. In December 1890 the First Oklahoma Territorial Legislature created three colleges: the University of Oklahoma (OU) at Norman, the Oklahoma Agricultural and Mechanical College (Oklahoma A&M, now Oklahoma State University) at Stillwater, and Central State Normal School (now University of Central Oklahoma) at Edmond.

With the politics of statehood, the western imbalance in the location of colleges and universities affecting the Twin Territories called for a compromise. To satisfy the leadership of Indian Territory, Oklahoma Territory offered to duplicate in the eastern part of the new state the number and types of institutions that existed in the west side.

Six district agricultural schools of secondary grade were also created in 1909. Their purpose was to prepare students for entrance to Oklahoma A&M or the normal colleges. In the eastern part of the state schools were established at Broken Arrow, Tishomingo, and Warner and in the western part of the state at Helena, Lawton, and Goodwell.

Thus, by 1910 the First Oklahoma Legislature had created twelve new institutions, six of collegiate grade and six of secondary grade. These twelve added to the seven established before statehood made a total of nineteen public schools and colleges in the young state. Six of the eight secondary schools evolved into colleges and universities (Murray State College, Connors State College, Northern Oklahoma College, Cameron University, Rogers State University, and Oklahoma Panhandle State University). The other two secondary-grade institutes, at Broken Arrow and Helena, closed in 1919. Also in 1919 a two-year college was added, Miami School of Mines (now Northeastern Oklahoma A&M College).

Although the total number of colleges and universities in 1920 was not excessive for a state of Oklahoma's size, the number in the public sector was greater because of the immediate need to establish an adequate statewide system. A combination of an above-average number of public institutions and a limited tax base has thus plagued Oklahoma almost since 1907 statehood.

The University of Oklahoma (OU) added the Tulsa Medical College as a budget extension of the University of Oklahoma Health Sciences Center in Oklahoma City in the mid-1970s. Prior to that date, separate OU constituent agencies included the College of Law and the Oklahoma Geological Survey. At the turn of the twenty-first century the OU Board of Regents governed these institutes as well as Rogers State University at Claremore and Cameron University at Lawton. In addition to the OU and OSU governance systems, ten two-year colleges and one special-purpose, baccalaureate-level university are governed by their own separate boards. Six regional, comprehensive universities (originally the normal schools) are governed by a single board.

Other additions to the Oklahoma State System of Higher Education include Higher Education Centers established at Ardmore in 1974, Idabel in 1982, and Enid in 1988. The University Center at Tulsa was established in 1982. The Tulsa center merged with Rogers State College at Claremore in 1996 to become Rogers University. In 1998 they were again separated and became a branch of Oklahoma State University at Tulsa and Rogers State University at Claremore.

Six institutions offer work at the Ardmore and Idabel centers, five collaborate in a Downtown College Consortium in Oklahoma City, several operate in Ponca City, and a number of schools exchange a growing number of electronically delivered courses and programs. Many colleges also offer courses irregularly at other numerous sites in the state.

Constitutionally created in 1941, the Oklahoma State Regents for Higher Education is the coordinating board of control for the state's public higher education system. During the year 2000–2001 the combined enrollment of the Oklahoma State System of Higher Education institutions and facilities totaled 213,972 students. In 1999–2000 these institutions conferred 6,348 two-year associate degrees, 12,476 bachelor's degrees, 4,075 master's degrees, 611 first-professional degrees (pharmacy, optometry, doctor of osteopathy, veterinary medicine, and law) and 370 doctor's degrees.

The following (as per The Chicago Manual of Style, 17th edition) is the preferred citation for articles:
Dan S. Hobbs and John H. Feaver, “Colleges and Universities, State,” The Encyclopedia of Oklahoma History and Culture, https://www.okhistory.org/publications/enc/entry.php?entry=CO025.