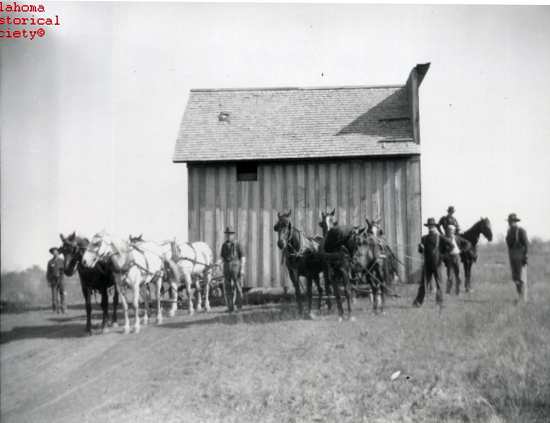 Situated approximately twenty miles north of Tulsa on State Highway 20 between U.S. Highways 75 and 169, Collinsville was originally in Rogers County. In 1918 citizens approved annexation to Tulsa County, in order to be closer to a county seat. Collinsville lies in a fertile triangle made by the Caney and Verdigris rivers and Bird Creek. Although numerous white settlers had lived in this section of the Cherokee Nation, Indian Territory, for many years, 1897 is the date old timers give as the community's beginning. The place had no official name until Dr. A. H. Collins moved his post office there in May 1897. Initially known as Collins or the Collins Post Office, Collinsville officially acquired its present name by June 1898 and incorporated in April 1899. By 1900 the population numbered 376.

Before the Atchison, Topeka and Santa Fe Railway completed its line from Kansas through Collinsville to Owasso in 1899, Collinsville's original site lay about a mile to the east. The railroad constructed tracks west of that original town to avoid crossing an additional creek. In late 1899 or early 1900 Collinsville's wooden buildings were moved on rollers to the new location adjacent to the tracks.

In the late 1890s the initial attraction to Collinsville was abundant, sulphur-free coal lying close to the surface. That mineral was stripped from the land by teams of men and horses and sold by the wagonload or shipped by rail. By 1902 fifteen to twenty rail car loads per day were shipped from Collinsville. The town's estimated population of fifteen hundred to two thousand included residents of the coal camps. According to the U.S. Census, the 1900 population was 376. In later years, a huge steam shovel was used to mine the coal. By 1902 drilling for oil and gas showed promise. Two large casinghead gas plants operated in the area by World War I. In 1906 the Coffeyville Vitrified Brick and Tile Company of Kansas, opened a factory in Collinsville, and the plant still operated as late as 1962. It supplied bricks for the town's buildings and paved streets and exported paving bricks as far as Tampa, Florida (thirty-one train-car loads in 1926).

Collinsville's oldest continuous business and also Tulsa County's oldest newspaper is the Collinsville News, which printed its first edition on May 11, 1899, at the original townsite. Three generations of the Wright family published the News for eighty-eight years before selling it to the Retherford family in 1987. It still informs the citizens.

The smelting industry had a significant impact on Collinsville. Opened in 1911, the smelters operated on a large scale until 1917 and on a smaller scale into the 1920s. The Bartlesville Zinc and Prime Western Zinc Smelters were both located on the southern edge of town. With thousands employed by the smelters and all businesses booming, the area around Collinsville swelled to 3,801 in 1920 approximately eight thousand residents. Smelter work was dangerous. The three local newspapers often contained stories of workers severely burned, crushed, or badly injured in the processing of the ore. During those years (1911–17) many of the existing historic downtown buildings were constructed. Peoples Power and Light provided electric service by 1910, and a public water system was completed by 1912. A Carnegie Library opened in 1917. As the smelting business waned, so did the local economy. The population in 1930 stood at 2,249 and in 1940 at 1,927.

With no major industry since the 1920s, Collinsville has relied more on a traditional, agriculture-based economy. Circa 1922 local youth started the state's first Future Farmers of America (FFA) chapter. The Sallee Family Dairy (an example of the many local dairies) located in the city in 1912 and still delivered milk by buggy to Collinsville homes after World War I. By 1926 the dairy also made deliveries to Tulsa, but by truck. Collinsville had a milk producers' cooperative and a cheese factory in the 1930s. In 1948 the staff of Oklahoma A&M College (now Oklahoma State University) designated the town "the Dairy Capital of Oklahoma."

Collinsville has long relied on volunteers for civic improvement. In the mid-1950s citizens worked for more than five years to construct a community swimming pool, still in use in 2003. Beginning in 1959, Collinsville and surrounding communities began raising funds to build a twenty-five-bed hospital for northern Tulsa County and portions of Rogers and Washington counties. Completed in 1962, Collinsville Memorial Hospital significantly improved residents' access to medical care and served the area for twenty-four years. In 1988 a four-lane expressway, State Highway 169, connected Collinsville with Tulsa. In the 1930s that same route had been mostly gravel between Tulsa and Kansas City.

Collinsville slowly grew from 2,011 in 1950 to 3,009 in 1970 to 3,563 in 1980. The 2000 census recorded 4,077 and the 2010 census, 5,606. The largest employers were city government, the school system, and the rural electric cooperative. The city maintains a home rule charter form of government. The Collinsville High School Band distinguished itself by winning ten consecutive state championships (1994–2003). A Tri-County Fair and an annual Founder's Day festival are held in late summer. No celebration, however, can equal the excitement of the "the Last Great Pow-Wow before Statehood," held October 14–19, 1907, and featuring Chief Rogers of the Cherokee, Geronimo of the Apache, Quanah Parker of the Comanche, Lone Wolf of the Kiowa, Spybuck of the Shawnee, and O-lo-co-wah-la of the Osage. The festivities included war dances, stomp dances, greyhound dog races, and a carnival.

The following (as per The Chicago Manual of Style, 17th edition) is the preferred citation for articles:
Ted W. Wright, “Collinsville,” The Encyclopedia of Oklahoma History and Culture, https://www.okhistory.org/publications/enc/entry.php?entry=CO029.