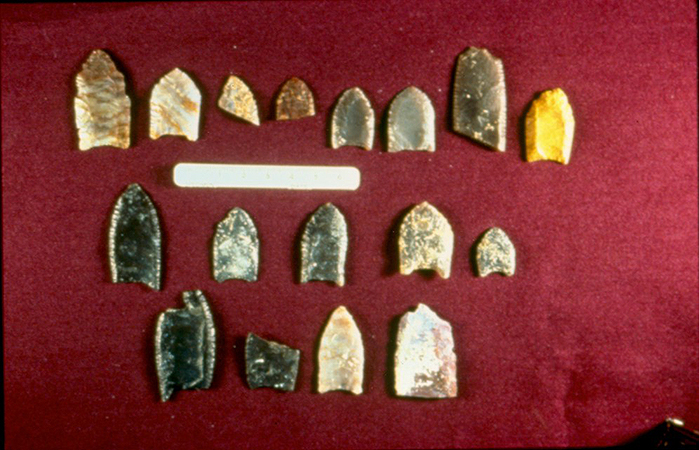 The Cooper Site in northwestern Oklahoma was the scene of three large, Folsom-age (circa 10,500 years ago) bison kills in a single gully. The bison were herded into a dead-end arroyo. Hunters, poised on the gully rim above the herd, killed the animals with spears tipped with finely crafted Folsom points. Upon completion of the kill, the hunters entered the arroyo and proceeded to butcher the animals by filleting the meat from the hump and front quarters of each animal.

Excavations conducted in 1993 and 1994 by archaeologists from the Oklahoma Archeological Survey, University of Oklahoma, uncovered the remains of seventy-eight animals killed in three events. Thirty-three Folsom projectile points, six flake knives, and over one hundred resharpening flakes were found in the bone beds. Based on the bisons' tooth eruption and wear patterns, archaeologists determined that all three events occurred during the late summer or early fall. Projectile points made from cherts from central Texas, the Texas Panhandle, and northwestern Kansas may indicate that two or three Folsom groups combined forces to conduct these kills. This site contains three of the largest kills known for the Folsom period on the southern plains. Most Folsom bison kills contain between three and six animals. The amount of weathering on bone surfaces suggests approximate five years separated each episode.

A rare glimpse of Folsom hunting ritual was uncovered in the form of a painted bison skull from the second kill. The skull, adorned with red zigzag lines, was apparently painted just prior to the second kill as part of a ritual to ensure a successful hunt. The mineral composition of the paint (hematite) withstood the ravages of time. This painted skull is the oldest such item known for North America and is the earliest documented evidence of hunting ritual for the Plains region.

The following (as per The Chicago Manual of Style, 17th edition) is the preferred citation for articles:
Leland C. Bement, “Cooper Site,” The Encyclopedia of Oklahoma History and Culture, https://www.okhistory.org/publications/enc/entry.php?entry=CO050.