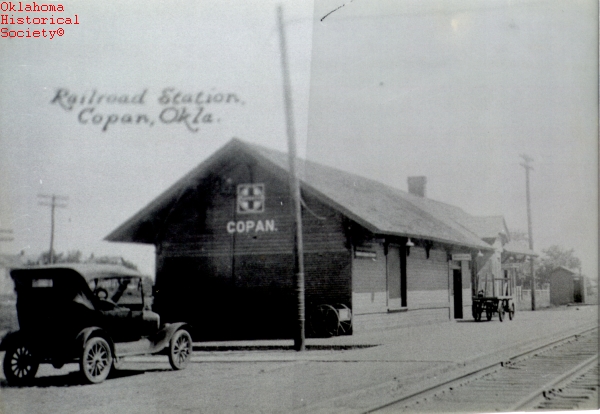 The Washington County community of Copan is situated fourteen miles north of Bartlesville, adjacent to U.S. Highway 75. A trading post stood on the present site during the 1880s, and an Atchison, Topeka and Santa Fe Railway station was constructed there in 1899. Although the depot was named after the ancient Honduran city of Copan, the settlement was called Lawton following the establishment of its post office in 1900. Lawton was renamed Weldon in 1901, and Weldon adopted the depot's designation in 1904. Copan was incorporated in 1906. The first mayor was M. J. Courtney, who also published the town's newspaper, the Copan Leader, beginning in 1910.

The petroleum industry was a boon to Copan's early economy. In 1904 the Prairie Oil and Gas Company laid Oklahoma's first trunk pipeline. The six-inch line extended from Bartlesville through Copan to Humboldt, Kansas. Around that same time Prairie Oil constructed an oil storage facility north of Copan. The site contained 107 metal tanks, each having the capacity to hold thirty-five thousand barrels of crude. The Copan Oil Field, discovered in 1907, included some eight square miles and had nearly twenty-two hundred wells by 1915.

The Copan School District was established in 1906 on ten acres of land donated by the Sheets family, proprietors of the Georgia Oil and Gas Company. Copan's students were reportedly the first in Oklahoma to be transported to school in horse-drawn wagons. A modern schoolhouse was built in 1908, and a brick secondary school was constructed in 1915.

The following (as per The Chicago Manual of Style, 17th edition) is the preferred citation for articles:
Jon D. May, “Copan,” The Encyclopedia of Oklahoma History and Culture, https://www.okhistory.org/publications/enc/entry.php?entry=CO057.