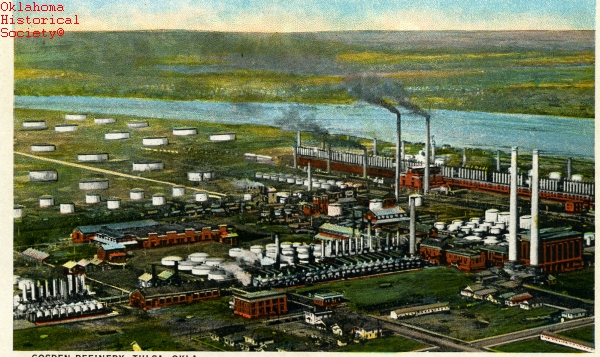 Oil magnate Josh Cosden, born in Maryland on July 8, 1881, earned and squandered two fortunes. Before traveling to Oklahoma to capitalize on the emerging oil industry, he worked as a drugstore clerk in Baltimore, Maryland. Circa 1910 he established a refinery in Bigheart, Oklahoma. Partly with the funds from this venture, in 1913 he built a refinery, one of the largest of its time, in West Tulsa and organized Cosden and Company. Soon he incorporated the Cosden Pipe Line Company and the Cosden Oil and Gas Company, controlling the crude oil and its transportation to his refinery. In 1917 he consolidated these into Cosden and Company, incorporated under Delaware law. In 1918 Cosden built Tulsa's first skyscraper, the Cosden Building, later the Mid-Continent Building, which is listed in the National Register of Historic Places (NR 79002029). Many estimated Cosden's wealth at $50 million.

Married twice, he divorced his first wife, Ottille Loewensprung, and wed Eleanor Neves, the former Mrs. Charles Roeser, who had lived across the street. He then left Tulsa, living extravagantly and enjoying high society in New York. In addition to his business dealings he played the stock market. The Cosdens maintained luxurious residences in New York, Florida, and Rhode Island. His stable of Thoroughbred racehorses earned him prominent recognition as one of the elite of Eastern society, and he lavishly bought his own railroad car and yacht. In 1924 Cosden and his wife hosted the Prince of Wales, later King Edward VIII.

In 1925 Cosden lost control of his finances, and the Mid-Continent Petroleum Company acquired his refinery and other oil assets. He also had to sell his mansions. By 1928 he established headquarters in Fort Worth, Texas, and invested in the exploration and drilling of the West Texas oil fields, accumulating another fortune estimated at $15 million. The Great Depression again depleted his funds. On November 17, 1940, Josh Cosden died of a heart attack in Arizona aboard a train traveling to El Paso. The Daily Oklahoman's obituary claimed that in the week before his death Cosden's reputed final assets had sold at a public auction in New York.

The following (as per The Chicago Manual of Style, 17th edition) is the preferred citation for articles:
Larry O'Dell, “Cosden, Joshua Seney,” The Encyclopedia of Oklahoma History and Culture, https://www.okhistory.org/publications/enc/entry.php?entry=CO065.