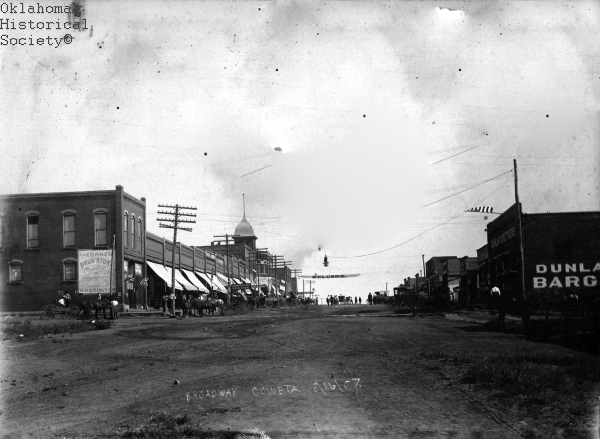 Located in the valley of the Arkansas River in northwestern Wagoner County, Coweta is intersected by State Highways 72, 51, and 51B and is near the Muskogee Turnpike. Tulsa lies thirty miles to the northwest and Muskogee thirty miles to the southeast. In 1843 Presbyterian minister Robert M. Loughridge opened Koweta, a Creek Nation mission school. The name honored a town in Georgia in the Creek Nation. Loughridge left Koweta to supervise Tullahassee Manual Labor School, which was completed in 1850. The Koweta school closed in 1861. The Coweta District Court afforded justice to Creek Indians, with whipping as a common punishment. Around 1886 the Creeks used their Coweta "whipping post" for the last time.

On May 24, 1897, the U.S. Post Office Department established a post office in the town. In 1901 Coweta was incorporated, and H. H. Lane served as mayor. In 1902 and 1903 the Missouri, Kansas and Texas Railway, known as the Katy, built a line from near Muskogee through Tulsa. In 1903 Coweta reacted to population growth by planning a new townsite on the tracks. Residents formed the Arkansas Valley Town Site Company and named Guy Bowman president. In 1910 the town's population stood at 1,187 and slowly climbed to 1,455 in 1940. The first newspapers to serve Coweta were the Coweta Courier, founded in 1903, and the Coweta Times, which began publication in 1905.

An agricultural industry sustained Coweta residents until the 1960s. Although grains continued to dominate, cotton acreage decreased. In 1960 the population was 1,858. It steadily rose to 4,712 in 1980. In 1979 the city hosted a memorial, The Moving Wall, to honor the eight Coweta sons who died in the Vietnam War. Many residents commuted to employment in Broken Arrow, Tulsa, and Muskogee. At the turn of the twenty-first century the city's largest employers were Coweta Schools, a Wal-Mart retail store, and city hall. Author George Milburn was born and raised in Coweta. The First Presbyterian Church of Coweta (NR 03000099) and nearby Koweta Mission site (NR 73001571) were listed in the National Register of Historic Places. In 2000 the population registered 7,139, and the town operated under a council-manager government. The 2010 census recorded 9,943 living there.

The following (as per The Chicago Manual of Style, 17th edition) is the preferred citation for articles:
Norma Walters, “Coweta,” The Encyclopedia of Oklahoma History and Culture, https://www.okhistory.org/publications/enc/entry?entry=CO078.