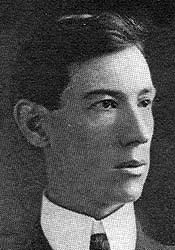 Charles Creager
(image courtesy of the U.S. House of Representatives).

U.S. Rep. Charles Edward Creager was born near Dayton, Montgomery County, Ohio, on April 28, 1873, the son of William Otterbein and Belle Basore Creager. After attending Ohio public schools and Northern Indiana University, Charles Creager worked in journalism on several Ohio newspapers. During the Spanish-American War he served in the Fourth Ohio Volunteer Infantry. He married Elizabeth Fleenor, and they had a son, Baron, and a daughter, Margaret. In 1904 the family moved to Muskogee, Indian Territory (I.T.), where Creager again engaged in the newspaper business. Prior to his appointment as special oil inspector for I.T. in April 1907, he was a clerk in the Indian agent office.

Elected as representative from Oklahoma's Third District to the Sixty-first U.S. Congress from 1909 to 1911, he was one of the first Republicans to represent the new state and the first representative from Muskogee. While in Congress, he served on the Committee on Mines and Mining and introduced the Creager Bill. Had it passed, it would have provided for the final disposition of the Five Tribes' tribal affairs. Unsuccessful in his second bid to serve in Congress, he was employed by the U.S. Indian Service and engaged in the oil business until 1934.

Active in civic affairs, Creager was a life member of Muskogee Masonic Lodge 28 and wrote A History of the Cryptic Rite Freemasonry in Oklahoma (1925). He died at the Muskogee Veterans Administration Hospital on January 11, 1964, and was buried in Greenhill Cemetery, Muskogee.

The following (as per The Chicago Manual of Style, 17th edition) is the preferred citation for articles:
Linda D. Wilson, “Creager, Charles Edward,” The Encyclopedia of Oklahoma History and Culture, https://www.okhistory.org/publications/enc/entry.php?entry=CR005.