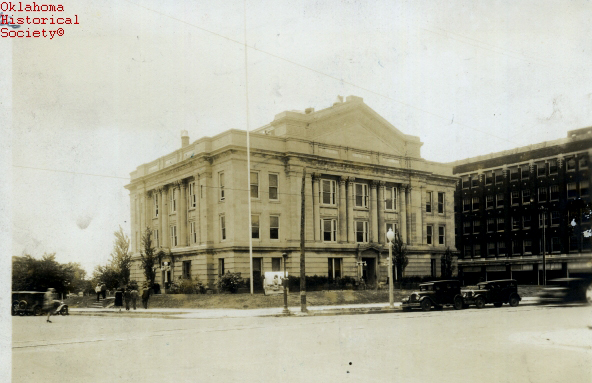 Located in east-central Oklahoma, Creek County is bordered by Pawnee County on the north, Tulsa and Okmulgee counties on the east, Okfuskee County on the south, and Lincoln and Payne counties on the west. Moman Pruiett, special delegate to the 1906 Oklahoma Constitutional Convention, wanted to name the county Moman, in honor of his mother. However, when the county was established at 1907 statehood, it was named for the Creek tribe. Formerly part of the Creek Nation, Indian Territory, the county lies within the Sandstone Hills physiographic region. With 969.77 square miles of land and water, the county is drained by the Cimarron River, tributaries of the Arkansas River, and the Deep Fork and the Little Deep Fork of the North Canadian River.

The area's prehistory has been little researched by archaeologists. In the 1940s and 1950s they surveyed the area when proposed reservoir construction threatened to inundate it. According to an archaeological survey published in 1983, Creek County has 142 known sites, but only one has been tested or excavated. Sites indicate occupation during the Archaic, Woodland, and Plains Village cultural periods.

Explorers traversed the area after it became part of the Louisiana Purchase in 1803. In the early 1800s Thomas James, Thomas Nuttall, and Washington Irving passed through and wrote their impressions of the region. In 1825 the Osage ceded to the United States the area where the Creek and other tribes would be settled after their removal from southeastern United States. Following the ratification of the Treaty of Washington of 1826, the Creek began their migration from Georgia and Alabama to Indian Territory, locating between the Arkansas and Canadian rivers. Before the Civil War (1861–65) the Creek raised cattle, cotton, and subsistence crops with African American slave labor.

During the Civil War a site called the Big Pond (located approximately ten miles southeast of present Depew) served as a campsite for Opothleyahola's followers. Nuttall had mentioned this area in his book A Journal of Travels Into the Arkansas Territory, During the Year 1819. During the war a trading post known as Sell's Store provided a temporary headquarters for Confederate Col. Douglas H. Cooper. Because the military and civilians had decimated the crops and livestock, the Creek worked to rebuild their homes and livelihood following the war. For economic reasons they leased grazing land to Texas cattlemen. Located near Bristow, the Jesse Allen ranch was representative of a middle-sized ranch. Allen, a Ute, started his ranch in the late 1860s. As his prosperity increased, he made additions to his two-room log cabin circa 1904 and 1911. He tended his own herd as well as cattle owned by Texans.

At 1907 statehood Creek County had 18,365 residents, and Sapulpa was designated as the county seat. On August 12, 1908, an election was held to permanently locate the government offices. A bitter struggle ensued between Bristow and Sapulpa until August 1, 1913, when the Oklahoma Supreme Court ruled in favor of Sapulpa. The present courthouse, completed in 1914, is listed in the National Register of Historic Places (NR 85000679).

In addition to agricultural and petroleum commerce, manufacturing has also added to the county's economy. Local natural resources such as clay led to the establishment of brick and tile plants as well as Frankoma Pottery. The availability of glass sand and affordable gas for fuel near Sapulpa brought about the formation of glass factories. By 1918 the Bartlett-Collins Glass Manufacturing Company, the Liberty Glass Company, the Schram Glass Company, and the Sunflower Glass Company were in operation. Through the years mattress factories have operated in Oilton and Bristow. Other manufacturing firms located in Bristow included the Glassmarc Corporation (manufacturer of fiberglass boats and other items), Artemis Incorporated (manufacturer of women's garments), and the U.S. Carpet Company plant.

Educational institutions have long been important. One of the earliest facilities in present Creek County was Euchee Boarding School, built in 1894 near Sapulpa, for American Indian children. In 1918 C. L. Garber served as its superintendent. In 1909 county voters selected Mounds as the location for the Creek County High School, which continued in operation until 1913. As a result of the Junior College Movement, Sapulpa, Bristow, and Drumright supported two-year institutions from the 1920s to the 1940s. The Central Technology Center in Drumright opened in 1970.

American Indians and early explorers used the waterways and trails. In 1835 Capt. J. L. Dawson developed a road known as Dawson Road, which followed an Osage hunting trail. In 1886 the Atlantic and Pacific Railroad (later the St. Louis and San Francisco Railway) built a line from Red Fork to Sapulpa. Twelve years later the St. Louis and Oklahoma City Railroad connected Sapulpa with Oklahoma City, and the towns of Bristow, Depew, and Kellyville sprang up along the line. In the early twentieth century other railroads linked the oil-boom towns of Drumright, Kiefer, Mounds, Shamrock, Slick, and Oilton to outside markets. The Tulsa-Sapulpa Union Railway, an interurban, continued in operation until 1960. An interurban connected Mounds with Tulsa. At the turn of the twenty-first century motorists used Interstate 44, Historic Route 66, Alternate U.S. Highway 75, and State Highways 16, 33, 48, 51, 53, 56, and 66.

Creek County has offered a number of cultural amenities. Keystone and Heyburn lakes have provided recreational opportunities. Visitors and citizens have participated in a variety of festivals, such as the St. Patrick's Day parade in Shamrock, the Striped Bass Festival at Lake Keystone near Mannford, and Oil Patch Days in Drumright. A number of locales have been listed in the National Register of Historic Places. Most were located in Bristow, Drumright, and Sapulpa. The Bristow Presbyterian Church (NR 79001992) was one of four National Register sites in Bristow. Drumright had nine sites. In addition to the county courthouse and the Downtown Historic District, Sapulpa had the Berryhill Building (NR 99001423), the John Frank House (NR 02000221), the McClung House (NR 80003262), and Bridge Number 18 at Rock Creek (NR 95000031).

The following (as per The Chicago Manual of Style, 17th edition) is the preferred citation for articles:
Linda D. Wilson, “Creek County,” The Encyclopedia of Oklahoma History and Culture, https://www.okhistory.org/publications/enc/entry.php?entry=CR008.