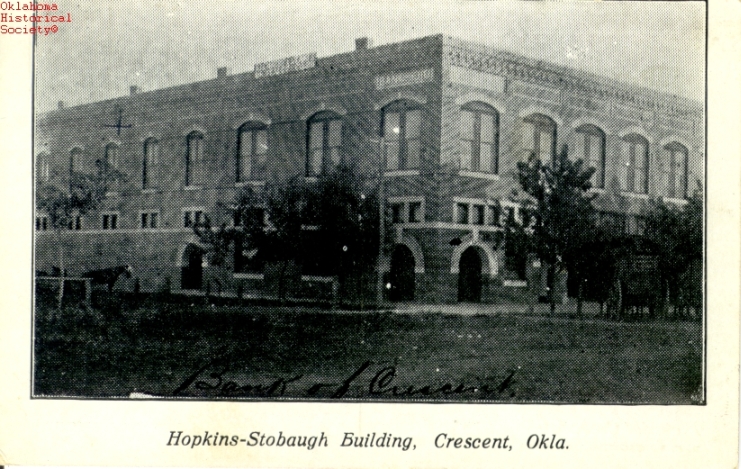 Located in Crescent Township in west-central Logan County, Crescent relies on an economy supported by agriculture and light industry. Situated at the intersection of State Highways 74 and 74C, the town is fourteen miles northwest of Guthrie, the county seat. Originally settled by land seekers during the Land Run of 1889, the town had its beginning in fall 1889 when William Brown opened a general merchandise operation, utilizing a wagon and a tent as his store. A few months later his neighbor Benjamin Ryland joined him as a business partner, and they upgraded their enterprise to a log cabin. Within the next year W. F. Mock built a cabin opposite of theirs and operated a hotel, restaurant, and bakery. A post office was established on February 21, 1890, and christened Crescent City, deriving its name from the moon-shaped glade in which the early entrepreneurs had started business. In November 1891 the town site was platted, and in 1893 it was incorporated. In 1902 the Denver, Enid and Gulf Railroad (later the Atchison, Topeka and Santa Fe Railway) laid track one mile west of the city. Two other homesteaders, C. E. Wells and J. H. Rhoades, were persuaded to surrender eighty acres each so that the town could move to the railroad. For a brief period the municipality was known as West Crescent. The first census for Crescent counted 139 persons in 1900. In 1910 there were 903 inhabitants. The town's early economy was based on agriculture, with cotton, wheat, peaches, and sweet potatoes as money crops.

At 1907 statehood Oklahoma entered the union as a "dry" state. The three saloons in town closed, replaced by two billiard parlors. The 1920 census recorded 878 individuals. By the mid-1920s citizens voted to outlaw billiards and to authorize moving-picture shows. In 1926 oil was discovered north of Crescent. This discovery was followed by the opening of the south Crescent oil field in 1930. Its thirty-two wells pumped three thousand barrels of oil per day in 1933. As oil production soared, agriculture waned. However, cotton and wheat production continued to sustain large farming operations through the rest of the century. The population grew from 1,190 in 1930 to 1,301 in 1940.

In 1934 Ralph E. Godfrey started donkey basketball as a fund-raising business. For the next forty-seven years he traveled with his animals throughout North America, generating goodwill for himself and the town. He fielded as many as ten other touring teams during his peak years in the 1950s and 1960s. Just south of Crescent, the Cimarron Processing Facility, operated by the Kerr-McGee Corporation, opened in the mid-1960s. The plant converted powdered uranium hexafluoride and plutonium into fuel pellets for use in the nation's nuclear power plants. In 1974 Karen Silkwood, a Cimarron employee critical of Kerr-McGee's management, died under unusual circumstances. The lawsuits generated by Silkwood's death continued to attract national attention into the early 1980s. The facility closed in 1976. Crescent's population hovered around 1,300 until 1970 and then jumped to 1,568 and to 1,651 in 1980. In 2000 Crescent had 1,281 residents and in 2010, 1,411.

During Crescent's history four newspapers have served the town's residents. The Crescent City Courier, published from 1894 to 1895, was followed by the Crescent City Times printed from 1895 to 1896. The Crescent Times made a short run in 1937–39. The longest-lived paper was the Logan County News, published from 1903 to 1996. In October 1951 Crescent adopted a city manager-city council form of government with the council members voting among themselves to choose a mayor.

Who's Who in Logan County: The People and Enterprises Who Have Made Logan County (Guthrie, Okla.: Cooperative Publishing Co., 1927).

The following (as per The Chicago Manual of Style, 17th edition) is the preferred citation for articles:
Thomas L. Hedglen, “Crescent,” The Encyclopedia of Oklahoma History and Culture, https://www.okhistory.org/publications/enc/entry.php?entry=CR011.