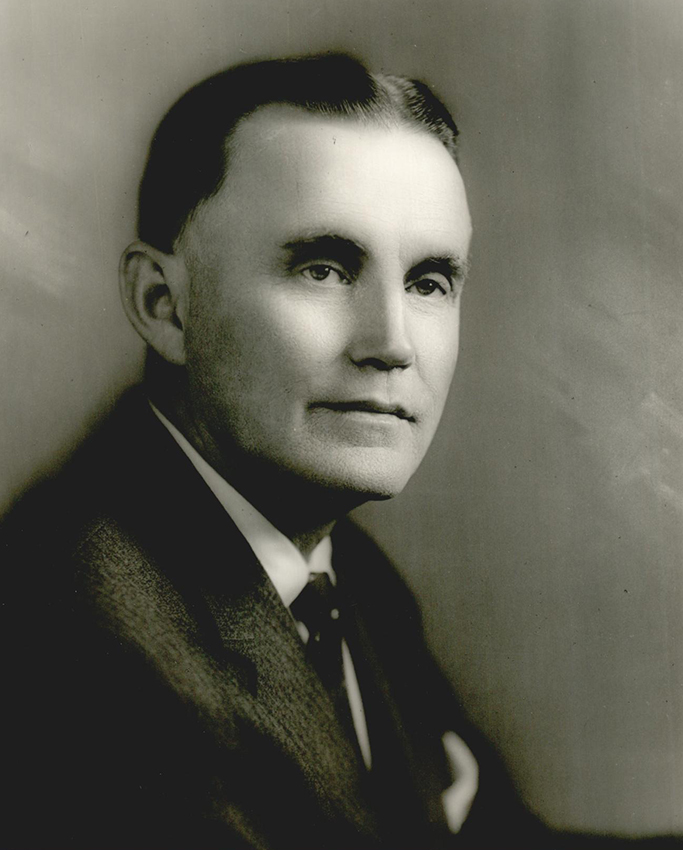 A botanist, an author, and a university president, George Lynn Cross was born May 12, 1905, near Woonsocket, South Dakota. His parents were George William and Jemima Jane Dawson Cross. The younger Cross became the seventh president of the University of Oklahoma (OU), holding that position from 1943 to 1968. He earned a bachelor's degree in 1926 and a master's degree in 1927 from South Dakota State College. He married Cleo Sikkink on October 26, 1926. They had three children: Mary-Lynn, George William, and Braden Riehl. Cross earned a doctorate from the University of Chicago in 1929 and joined the University of South Dakota faculty, heading the botany department. After he met Dr. Paul B. Sears, head of the OU botany department, Cross decided to join OU as a structural botanist. After Sears left, Cross headed the botany department from 1938 until 1942. Demonstrating his ability to lead others in increasingly important administrative positions, he served as assistant dean and acting dean of the Graduate College as well as acting director of the Research Institute. He was interim university president from December 23, 1943 to August 31, 1944.

Selected unanimously by the Board of Regents, Cross took office as the university's seventh president on September 1, 1944. One of his first major challenges was managing the housing shortage created by increased enrollment during the postwar years. He acquired the adjacent U.S. Navy training facilities and expanded the university's land holdings by hundreds of acres. He welcomed an entire generation of veterans to the university family. He started the University of Oklahoma Foundation, which accepts and manages private gifts to the university. Cross played an important role in the peaceful desegregation of the OU campus and admitted the first African American student, George W. McLaurin, to the school and the first African American woman, Ada Lois Sipuel Fisher, to the university's law school. With a strong interest in intercollegiate athletics, Cross supported a football program that had extraordinary success, especially under Coach Charles "Bud" Wilkinson.

During Cross's tenure the library received the DeGolyer History of Science Collection, donated by geophysicist and OU alumnus Everette Lee DeGolyer, and the Bass Collection in Business History, given by Harry W. Bass, Sr., and his wife. Under Cross, Drs. Mark Everett and James L. Dennis, medical school deans, continued to build a comprehensive health sciences center in Oklahoma City.

Cross's years are noted for the construction and expansion of many university buildings. Graduate student enrollment increased from 98 in 1943 to 3,700 in 1968. Cross kept lines of communication open during the 1960s, keeping campus protests and student dissatisfaction to a minimum. In his later years he strongly promoted free speech and refused to censor controversial speakers. His awards were numerous and included induction into the Oklahoma Hall of Fame (1951), OU's Distinguished Service Citation (1959), and honorary degrees from South Dakota State University and Oberlin College. His writings include Blacks in White Colleges: Oklahoma's Landmark Cases (1975), Presidents Can't Punt: The OU Football Tradition (1977), The Seeds of Excellence: The Story of the University of Oklahoma Foundation (1986), and The University of Oklahoma Research Institute: 1941–1973 (1986). He died on December 31, 1998, in Norman, Oklahoma.

Cross is known for a humorous remark made during the winning football years at Oklahoma. When asked by a member of a legislative appropriation committee, "Why do you need so much money?" he replied, "I would like to build a University of which the football team could be proud."

The following (as per The Chicago Manual of Style, 17th edition) is the preferred citation for articles:
Kitty Pittman, “Cross, George Lynn,” The Encyclopedia of Oklahoma History and Culture, https://www.okhistory.org/publications/enc/entry.php?entry=CR017.