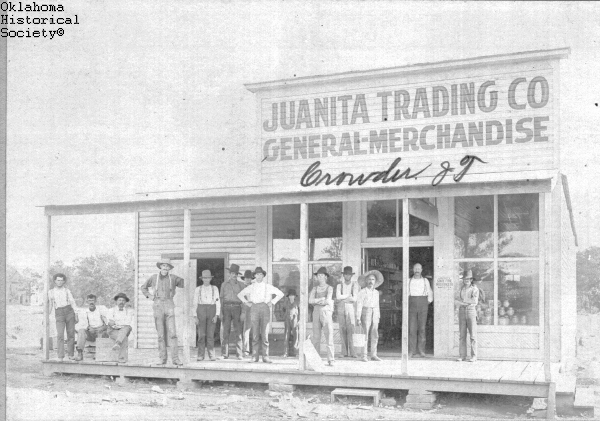 Located in Pittsburg County near U.S. Highway 69 and approximately fifteen miles northeast of McAlester, Crowder is located in the former Choctaw Nation, Indian Territory. In 1872 the Missouri, Kansas and Texas Railway (MK&T) built a main line through the Choctaw country, and settlements developed along the tracks. Crowder was established at the crossroads of the MK&T with a newly built Fort Smith and Western Railway line. In 1896 Dr. William Edgar Crowder, uncle of Will Rogers's wife, Betty, arrived at Canadian, Choctaw Nation. Crowder, J. D. Tignor, and Jim Finley, a surveyor, all Canadian residents, helped establish the site. Sent to Fort Smith, Arkansas, in 1901 or early 1902 to arrange for the Fort Smith and Western to come through Canadian, instead they negotiated an agreement that routed the tracks five miles south. Crowder owned 160 acres of land where the two railroads converged. He platted the property into seven hundred lots, creating a town he called Juanita, after his wife, Juanita Harlan. On March 21, 1902, the first post office at Juanita was officially authorized. Bond, a railroad siding where locally quarried stone was shipped to market, had earlier existed in the vicinity. There are indications that at one time locals referred to the small siding as Turkey Creek or Bengal.

The advent of the Fort Smith and Western, with the existing Missouri, Kansas and Texas Railway, established Juanita as an important crossroads and a shipping point for the area's cotton crops. However, a town named Juanita already existed in the Choctaw Nation, and a court ordered a name change. Residents of the new town decided to call it Crowder. By 1910 Crowder had a population of 549 and thriving businesses, including hotels and a bank. The Crowder City Advertiser and the Crowder City Guardian informed the citizens prior to 1917. The population increased to 581 in 1920 before declining to 340 in 1930.

Prior to World War II the Fort Smith and Western ended local service. In 1949 a tornado destroyed fourteen of Crowder's businesses. By 1950 the population had declined to 267, but the town regained a few residents, to register 339 in 1970. The early 1960s reconfiguration of U.S. Highway 69, providing a four-lane road, in effect bypassed Crowder, and a place that had been an important commercial crossroads became a small town that survived into the twenty-first century. The development of nearby Lake Eufaula has brought the town tourist dollars. In 2000 the population stood at 436 and in 2010 at 430.

The following (as per The Chicago Manual of Style, 17th edition) is the preferred citation for articles:
Wanda L. Clark, “Crowder,” The Encyclopedia of Oklahoma History and Culture, https://www.okhistory.org/publications/enc/entry.php?entry=CR019.