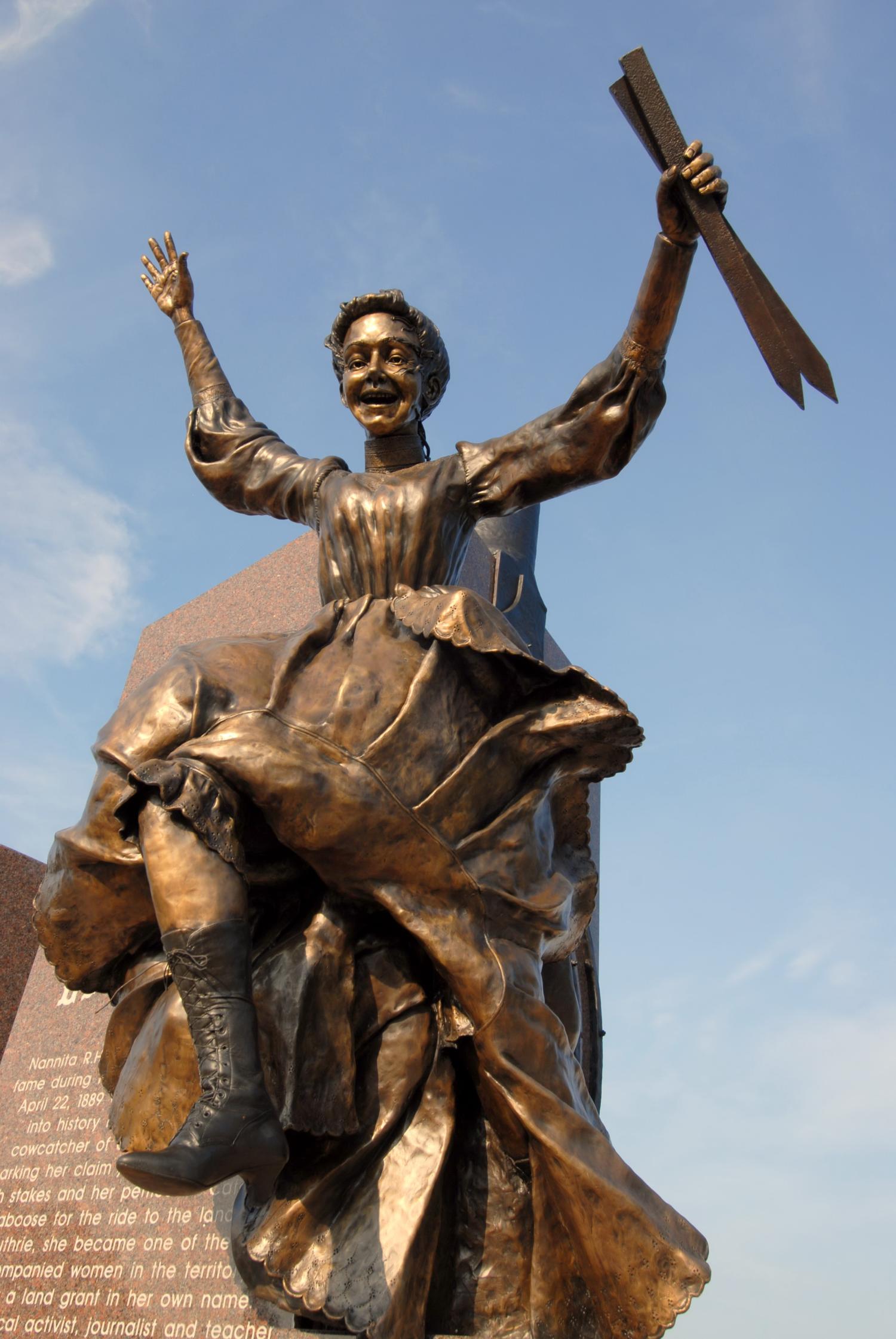 Also known as "Kentucky Daisey," one of the most colorful and dashing participants in the Land Run of 1889 was a petite, young woman named Nanitta R. H. Daisey. With a pistol tucked into her waistband, she leaped from her perch on a locomotive and ran to stake a homestead claim north of Edmond Station. In doing so, "Kentucky Daisey" made headlines around the nation as a daring belle of her day.

Nanitta Daisey had already gained local fame in Kentucky before coming west. As a reporter in a newspaper environment dominated by men, as a schoolteacher, and as candidate for Kentucky State Librarian, she had gained a reputation for witty and frank speech. No one was surprised when she announced plans to take part in the opening of the Unassigned Lands, popularly known as the Oklahoma Lands.

Having secured a job as correspondent for the Dallas Morning News and for the Fort Worth Gazette to cover the opening, Daisey caught a Santa Fe train into the Oklahoma Lands on the day before the run. At Guthrie Station, however, Capt. Arthur MacArthur refused to let her disembark ahead of the designated time. She then went to Purcell, and she fought her way aboard the jammed boomer train that crossed into the Oklahoma Lands at high noon. According to a popular legend, at Edmond Station she persuaded the engineer to let her ride on the cowcatcher as the train slowed on the upgrade near the homestead she had previously chosen, the 160 acres comprising the Northwest Quarter of Section 24, Township 14 North, Range 3 West. Once she had planted her stake, Nanitta fired a shot into the air and shouted, "I salute Kentucky Daisey's claim!" Then she hurried back to the train and was pulled aboard the caboose by a fellow journalist.

For a time Nanitta Daisey worked as reporter and taught school at Guthrie, a new town and territorial capital. But her land rush days were by no means over. When the Sac and Fox lands were opened on September 22, 1891, she made the race on horseback. Her horse stumbled, however, and threw her in the path of the rushing horde. Although she survived the fall, the Police Gazette erroneously reported her as having been trampled to death and even supplied an artist's sketch of the supposed event.

Still infected with "land rush" fever, Nanitta organized a colony of eleven other women to settle in the Cheyenne-Arapaho Reservation, scheduled for opening by land run in April 1892. Stationing her followers in a hideout in present Roger Mills County, she made her entry in 1891 sooner than allowed. While leading a packhorse loaded with provisions, she was caught by U.S. Army troops and escorted to El Reno.

Undeterred, she vowed to try again. True to her word, she participated in the 1893 opening of the Cherokee Outlet. One paper reported that Daisey was at the head of thirty-six women who had hauled their own lumber and built a fifteen-room house. That story was fictitious, but she did make the run to Perry on the train.

While living in Guthrie, Daisey had married a man several years her junior. Andreas E. J. Unland Svegeborg was a soldier in Capt. Arthur MacArthur's command during the Run of 1889. When Svegeborg was transferred to Fort Reno and then to the Philippines, the couple separated. Yearning for her husband after her homesteading career ended, Nanitta lapsed into bad health. Her once-perky spirits dimmed. When she learned that Svegeborg had returned to the United States and was living in Chicago, she went there to seek reconciliation. Instead, he divorced her and remarried. She died in Chicago in 1903 in abject poverty. Although the saga of Nanitta Daisey came to a sad ending, she personified the adventurous and determined spirit of Oklahoma settlement.

The following (as per The Chicago Manual of Style, 17th edition) is the preferred citation for articles:
Stan Hoig, “Daisey, Nanitta R. H.,” The Encyclopedia of Oklahoma History and Culture, https://www.okhistory.org/publications/enc/entry.php?entry=DA004.