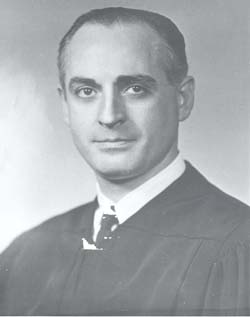 Brigadier general and federal judge Frederick Alvin Daugherty was born in Oklahoma City on August 18, 1914. By age nineteen he had lost his parents, Charles L. and Felicia A. Mitchell Daugherty. In 1933 Fred Daugherty graduated from Cumberland University, Lebanon, Tennessee, with a bachelor's degree in law. Continuing his education at Oklahoma City University and the University of Oklahoma, he was first in his class and passed the bar examination in 1937. He fought with the Forty-fifth Infantry Division of the U.S. Army in World War II and served as brigadier general in Korea. Daugherty was assistant division commander of the Forty-fifth Infantry Division from 1952 to 1960, attaining the rank of commanding general. Retiring from the military as a major general in 1964, he had earned several medals, but it was the Combat Infantryman's Badge of which he was most proud.

From 1946 to 1950 he was a member of Ames, Ames, and Daugherty law firm in Oklahoma City. In 1961 Pres. John F. Kennedy appointed Daugherty as federal district judge for Oklahoma, a position he served in until his retirement in 1996. Active in many civic organizations, he became a life member of the board of directors of the Oklahoma City Chamber of Commerce, was inducted into the Oklahoma Hall of Fame (1969) and the Oklahoma Military Hall of Fame (2000), and has been Sovereign Grand Inspector General of the Masons. At the turn of the twenty-first century Daugherty resided in Oklahoma City with his wife, Betsy F. Amis, whom he had married on December 15, 1965. He died on April 7, 2006.

The following (as per The Chicago Manual of Style, 17th edition) is the preferred citation for articles:
Adriana G. Schroeder, “Daugherty, Frederick Alvin,” The Encyclopedia of Oklahoma History and Culture, https://www.okhistory.org/publications/enc/entry.php?entry=DA011.