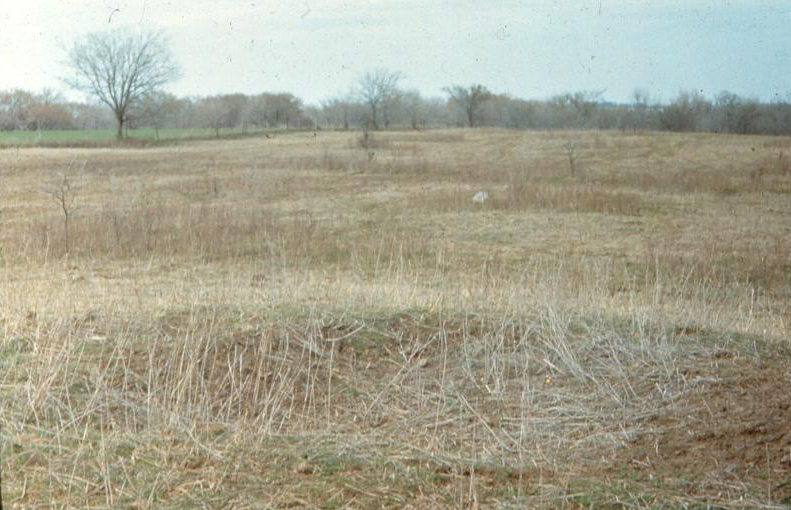 A Kay County archaeological site lying on a terrace near the Arkansas River, the Deer Creek Site (34KA3) revealed an early- to mid-eighteenth-century Wichita village that interacted with French hunters and traders. A contemporaneous site, Bryson-Paddock, was located nearly two miles upstream on the Arkansas River. Joseph Thoburn of the University of Oklahoma's history department knew of the Deer Creek Site as early as 1914. He conducted some excavation in 1917, but the scope of his work is unknown. In 1926 Ernest Marland funded an archaeological expedition to study the site, but the landowner would not allow excavation. The work shifted to the Bryson location. In that same year Thoburn found an aged map that placed a "Fernandina" in the general vicinity of the site. Thoburn claimed that Fernandina was Deer Creek and stated that he believed it to have been the first "white" settlement in Oklahoma. The map had actually been published in the 1860s.

Later scholars believe that the actual evidence, which came mostly from surface examinations, seemed to indicate that the site had been a Wichita village where French trappers and traders periodically were stationed to supply Louisiana with meat. The villagers probably hunted and processed the animals and traded the products for European merchandise. Archaeologists have not methodically excavated the Deer Creek Site, but there have been numerous examinations of the Bryson-Paddock Site. The number of scrapers found there reinforce the theory that the place was a large meat-processing center. These digs also found artifacts of French material culture, including fragments of muskets, both French and English made, and gun flints. The gun flints seemed to be native-produced but were not made from any local material. They had been either provided by the French, who had obtained them from another tribe, or acquired through direct trade with other American Indians.

In 1981 ethnohistorian Mildred Mott Wedel published a report on the Deer Creek Site and asserted that the place-name Fernandina (or Ferdinandina) dated to the 1850s and had no connection with the eighteenth-century Wichita village that had been located nearby. She also claimed that Deer Creek had not been a French fort, but a Wichita settlement, possibly having a reinforced fortification to protect against the Osage from the east and various Plains Indian enemies from the west. Most historians suggest that by 1760 the Wichita had relocated to the Red River, the threat of attack by the Osage having been a major factor in their retreat from the Arkansas River region. In 1966 the Deer Creek Archaeological Site (NR 66000630) was listed in the National Register of Historic Places, and in 1979 the Bryson Archaeological Site (NR 79001997) was listed. The U.S. Army Corps of Engineers owns the Deer Creek Site property, acquiring the land prior to its creation of the Kaw Reservoir, which began construction in 1966.

"Demythologizing History: The Case of Fernandina," in W. David Baird and Danney Goble, The Story of Oklahoma (Norman: University of Oklahoma Press, 1994).

The following (as per The Chicago Manual of Style, 17th edition) is the preferred citation for articles:
Larry O'Dell, “Deer Creek Site,” The Encyclopedia of Oklahoma History and Culture, https://www.okhistory.org/publications/enc/entry.php?entry=DE006.