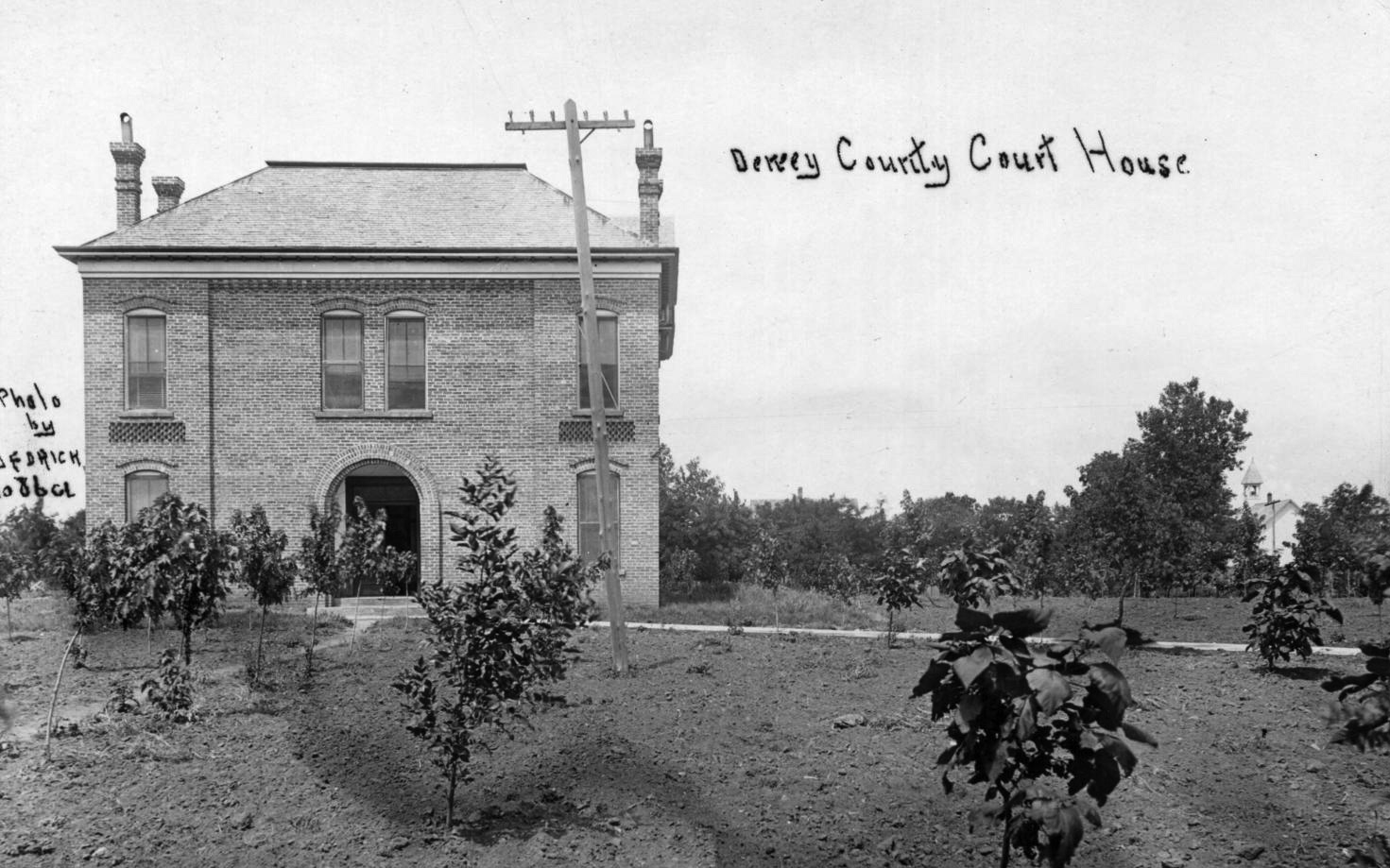 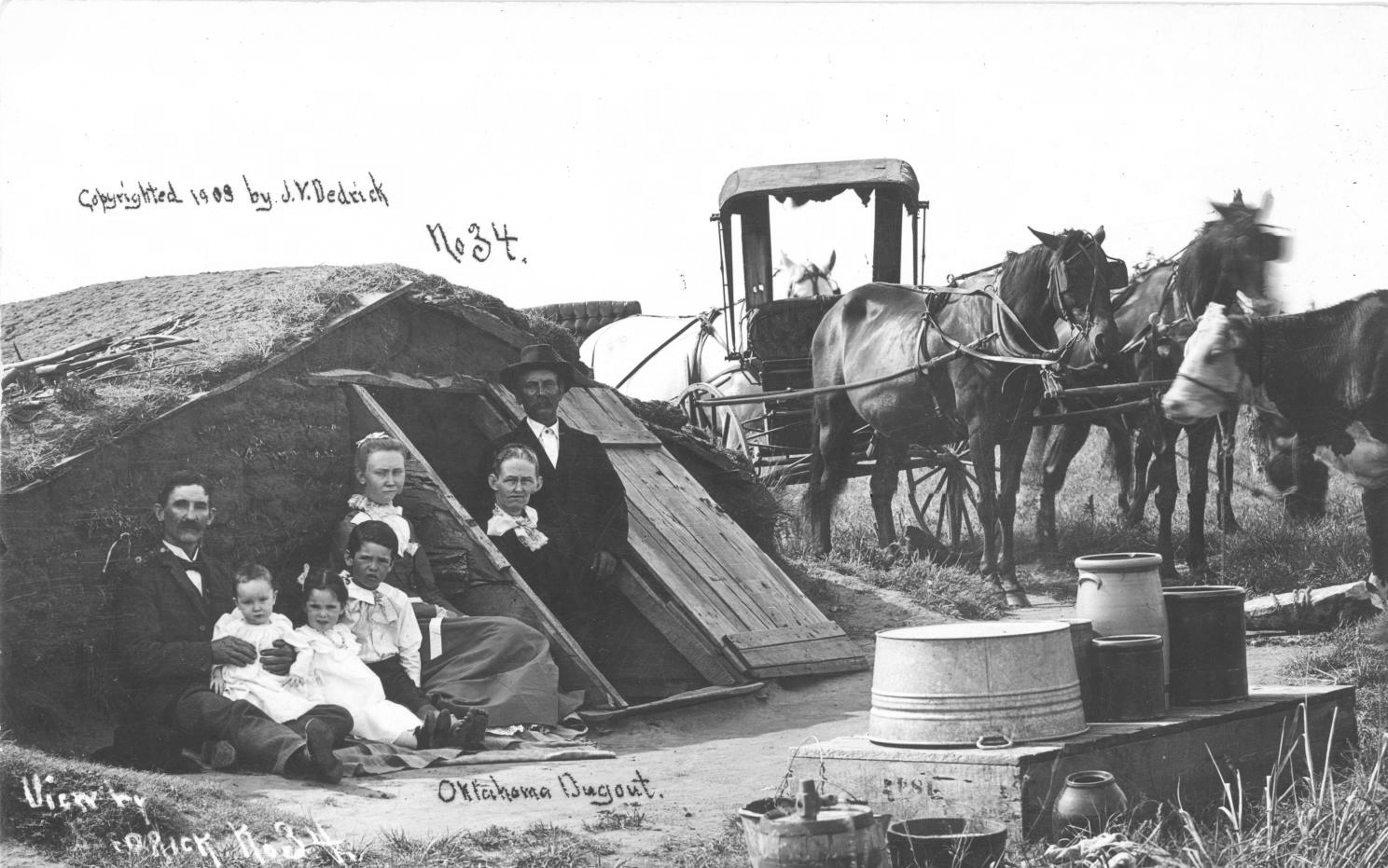 Located in west-central Oklahoma, Dewey County is bordered by Woodward and Major counties on the north, Blaine County on the east, Custer County on the south, and Ellis and Roger Mills counties on the west. Named for Adm. George Dewey, the county was formerly part of the Cheyenne-Arapaho Reservation. Dewey County is comprised of 1,008.26 square miles of land and water. Drained by the Canadian and North Canadian rivers it lies mostly in the Gypsum Hills physiographic region. The western one-fourth of the county is situated in the High Plains region. In 2010 the incorporated towns included Camargo, Leedey, Oakwood, Putnam, Seiling, Vici, and Taloga, the county seat.

Dewey County's prehistory is represented by one Paleo-Indian site (dating prior to 6000 B.C.), forty-one Archaic sites (6000 B.C. to A.D. 1), fifteen Woodland sites (A.D. 1 to 1000), and thirty-five Plains Village sites (A.D. 1000 to 1500). Of significance is the Hanjy Mammoth Site. In 1983 Gary Hanjy reported that mammoth bones had been uncovered on his father's property. During excavations in the area a second mammoth was discovered. Teeth from the two adults, who died at a natural spring site, were dated to 143,000 and 166,000 years ago.

From the 1500s to the 1800s Plains Indians used western Oklahoma as a migratory corridor. In 1740 French Canadian traders and brothers Pierre Antoine and Paul Mallet, returning from New Mexico to New Orleans, followed the Canadian River to its confluence with the Arkansas River. In 1820 Maj. Stephen H. Long headed an expedition that followed the Canadian River from western Oklahoma to Fort Smith, Arkansas. During the 1830s and 1840s other explorers and traders such as Josiah Gregg, Nathan Boone, and Randolph B. Marcy passed through present Dewey County.

Upon their removal from the East in the early 1830s the Choctaw located between the Canadian and Red rivers in Indian Territory. The Creek and Seminole received land between the Cimarron and Canadian rivers. Each of those areas extended into present Dewey County. As specified in the Reconstruction Treaties of 1866 the Choctaw and Chickasaw ceded their western domain to the United States. Known as the Leased District, part of the area became the Cheyenne and Arapaho reservation. On April 19, 1892, the reservation was opened to non-Indian settlers.

Designated as D County by Congress, the county was renamed Dewey County in the general election held in November 1898. Initially, county commissioners rented space in a two-story, brick structure. In 1909 a wood-frame building at Main and Broadway offered space for county offices until a modern courthouse was completed in 1926. The Dewey County Courthouse is listed in the National Register of Historic Places (NR 85000680).

The county's natural resources have included bentonite, oil and gas, gypsum, clay, and sand. Bentonite, used in oil refining and the manufacture of cosmetics, was mined near Camargo. Oil and gas activity occurred between Taloga and Putnam during the late 1940s and 1950s and again in the 1970s. At the turn of the twenty-first century Dewey County reported two manufacturing firms that employed more than ten individuals.

Early transportation routes followed the waterways and American Indian trails. In 1849 the California Road developed across Indian Territory and passed through present Dewey County. In the 1860s and 1870s military roads connected Camp Supply to Fort Sill and Fort Reno. Cattle drives from Texas to Kansas followed the Western Trail, which passed through Camargo and Trail. Trail, a stopping point on the Western Trail, received its name from the Trail Store and had a post office from 1898 to 1929. In 1902 the Kansas City, Mexico and Orient Railway built a line that passed through Oakwood. In 1911–12 the Wichita Falls and Northwestern Railway (later part of the Missouri, Kansas and Texas Railway) connected Leedey, Camargo, and Vici with outside markets. Modern motorists are served by State Highways 3, 34, 47, 51, and U.S. Highways 60, 183, 270, and 281. At the turn of the twenty-first century airparks were located at Leedey, Vici, and Seiling.

The following (as per The Chicago Manual of Style, 17th edition) is the preferred citation for articles:
Linda D. Wilson, “Dewey County,” The Encyclopedia of Oklahoma History and Culture, https://www.okhistory.org/publications/enc/entry.php?entry=DE018.