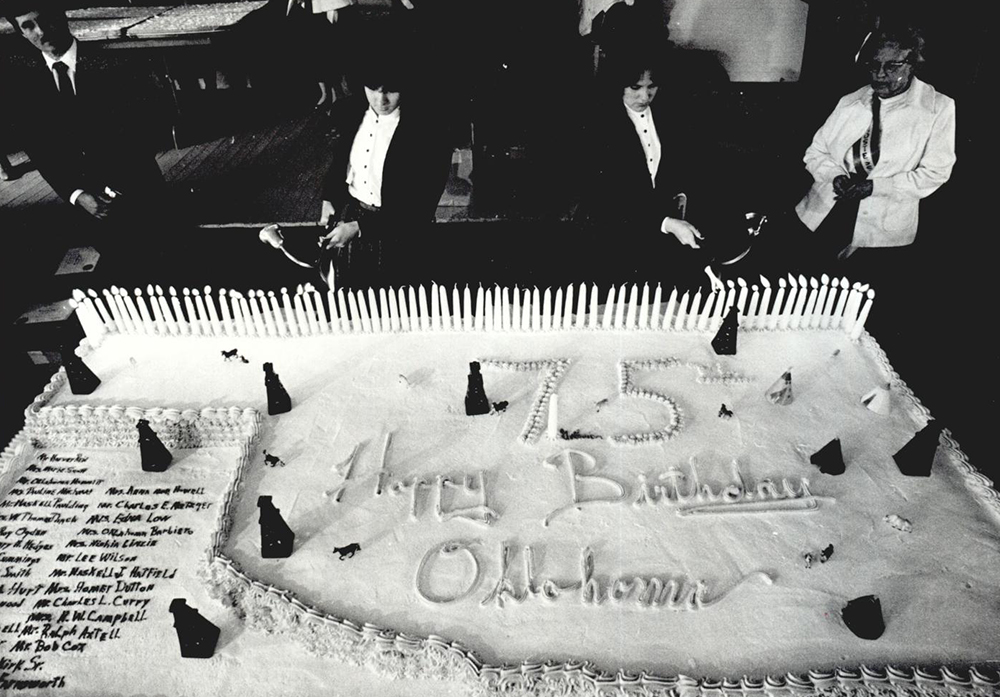 Oklahoma commemorated seventy-five years of statehood with events scheduled between June 13, 1981, and November 16, 1982. In December 1980 Gov. George Nigh asked Jack T. Conn, president of the Oklahoma Historical Society, to chair the proposed Diamond Jubilee Commission. Former U.S. House Speaker Carl Albert was made honorary chair. The date June 13, 1981, was chosen because it was the weekend before the seventy-fifth anniversary of the Enabling Act, signed by Pres. Theodore Roosevelt on June 16, 1906, and because there were seventy-five weeks between the two dates. A logo using the official state colors of green and white was designed with the state outline and the number 75 superimposed on it. The official slogan was "You're Doin' Fine, Oklahoma!"

The jubilee started on June 13, 1981, with events occurring simultaneously across the state. The Broadway musical Oklahoma! was performed at the Civic Center Music Hall in Oklahoma City from June 13 through July 14, 1981, with a special Diamond Jubilee performance held on June 13. Tulsans also enjoyed a special performance of Oklahoma! and a barbecue at Tulsa's Discoveryland Outdoor Musicals. A horse race and a music festival starring Waylon Jennings were held at Midway Downs in Stroud on June 13. An air show was scheduled at Haskell on June 13 and 14. California aviator and pilot Calvin Pitts and Joe Cunningham of Tulsa left Wiley Post Airport in Oklahoma City on June 13 to retrace the around-the-world flight that Wiley Post had made fifty years earlier.

Oklahoma was the featured state at the Festival of American Folklife sponsored by the Smithsonian Institution and the National Park Service and held in Washington, D.C., on June 24–28 and July 1–5, 1982. Based on their talents in the area of crafts, music, horsemanship, and service in the petroleum industry, ninety Oklahomans were selected to represent the state. The folklife programs were repeated at the State Fair in Oklahoma City on September 24–28, 1982, and at the Tulsa State Fair on October 1–5, 1982.

Diamond Jubilee events culminated on Statehood Day, November 16, 1982. In Guthrie, the original capital city, a mock wedding ceremony joined Oklahoma and Indian territories. A parade and a barbecue followed. Participants received nine ounces of barbecued beef, a slice of white bread, a pickle, and coffee, the same items served at the 1907 barbecue. A formal dinner and ball were held that evening at the local Scottish Rite Temple. Across the state, school children released balloons at 10:30 a.m. to coincide with activities in Guthrie. Attached to each balloon was a card that gave the child's name and address. Many students received responses from individuals who found the balloons as far away as England, Germany, Canada, and the Bahamas. Children also wore western clothing, played early-day games, and sang songs from the turn of the twentieth century.

The following (as per The Chicago Manual of Style, 17th edition) is the preferred citation for articles:
Linda D. Wilson, “Diamond Jubilee of Statehood,” The Encyclopedia of Oklahoma History and Culture, https://www.okhistory.org/publications/enc/entry.php?entry=DI001.