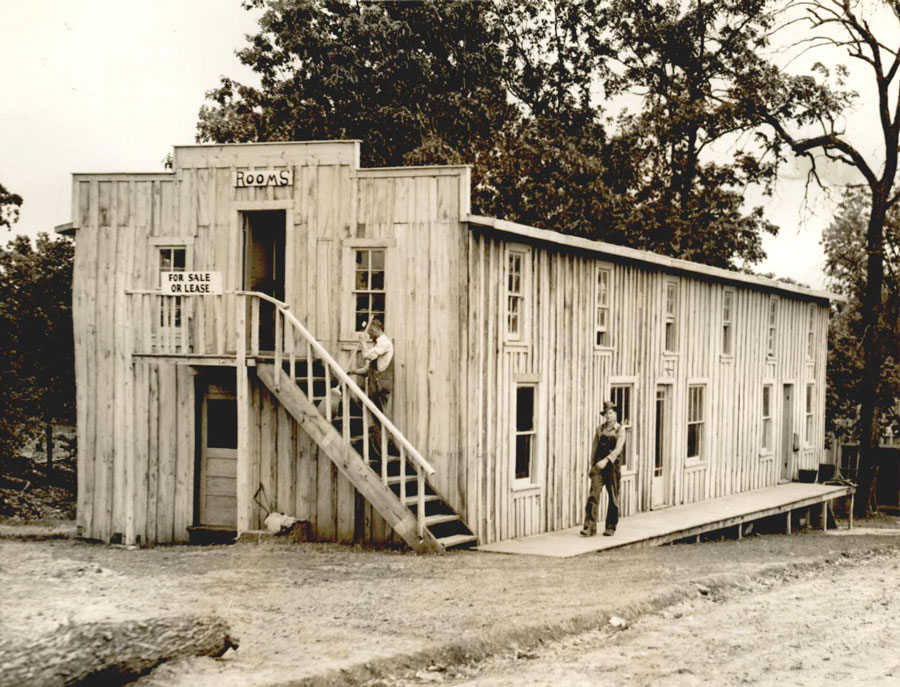 Disney is located in northeastern Mayes County on the east end of Pensacola Dam on State Highway 28. The mile-long highway across the dam separates the city of Langley from Disney. Both of the towns have similar histories, beginning in 1935 with the construction of the Grand Lake dam.

On November 12, 1939, C. D. Armstrong founded Disney on land he acquired to plan and promote the new town. The city boundaries are the Grand River Dam to the west, Grand Lake to the west and north, the East Spillway bridge to the east, and the Grand River to the south, making the city an island. The land value increased with the large influx of dam construction workers. On May 21, 1938, a U.S. Post Office was established and named for Wesley E. Disney, member of the U.S. Congress. Before the dam was completed, ferries provided the only transportation between Disney and Langley. In addition, the town offered boat excursions for visitors who wished to view the dam site under construction.

Disney was incorporated on March 19, 1959, and the 1960 census counted 224 residents. The town peaked in 1980 at 464. Within the city limits are five recreation areas of Cherokee State Park. These provide camping, swimming, picnicking, boating, fishing, and skiing. Since the town's founding the permanent population has remained steady at around three hundred citizens. However, the population reaches fifteen hundred to two thousand when owners of summer homes return for the hottest season. Disney became a ghost town during World War II, as U.S. marshals guarded the dam, making it difficult for tourists to enter or leave. At the end of the twentieth century Disney had a convenience store, two cafés, a bank, a bookstore, an antique shop, several retail stores, and other businesses. In 2000 the population stood at 226 and in 2010 at 311.

Paul I. Wellman, "The Man Behind the Dizziness of Disney, Oklahoma," Kansas City (Missouri) Star, 16 July 1939.

The following (as per The Chicago Manual of Style, 17th edition) is the preferred citation for articles:
Betty Lou Harper Thomas, “Disney,” The Encyclopedia of Oklahoma History and Culture, https://www.okhistory.org/publications/enc/entry.php?entry=DI008.