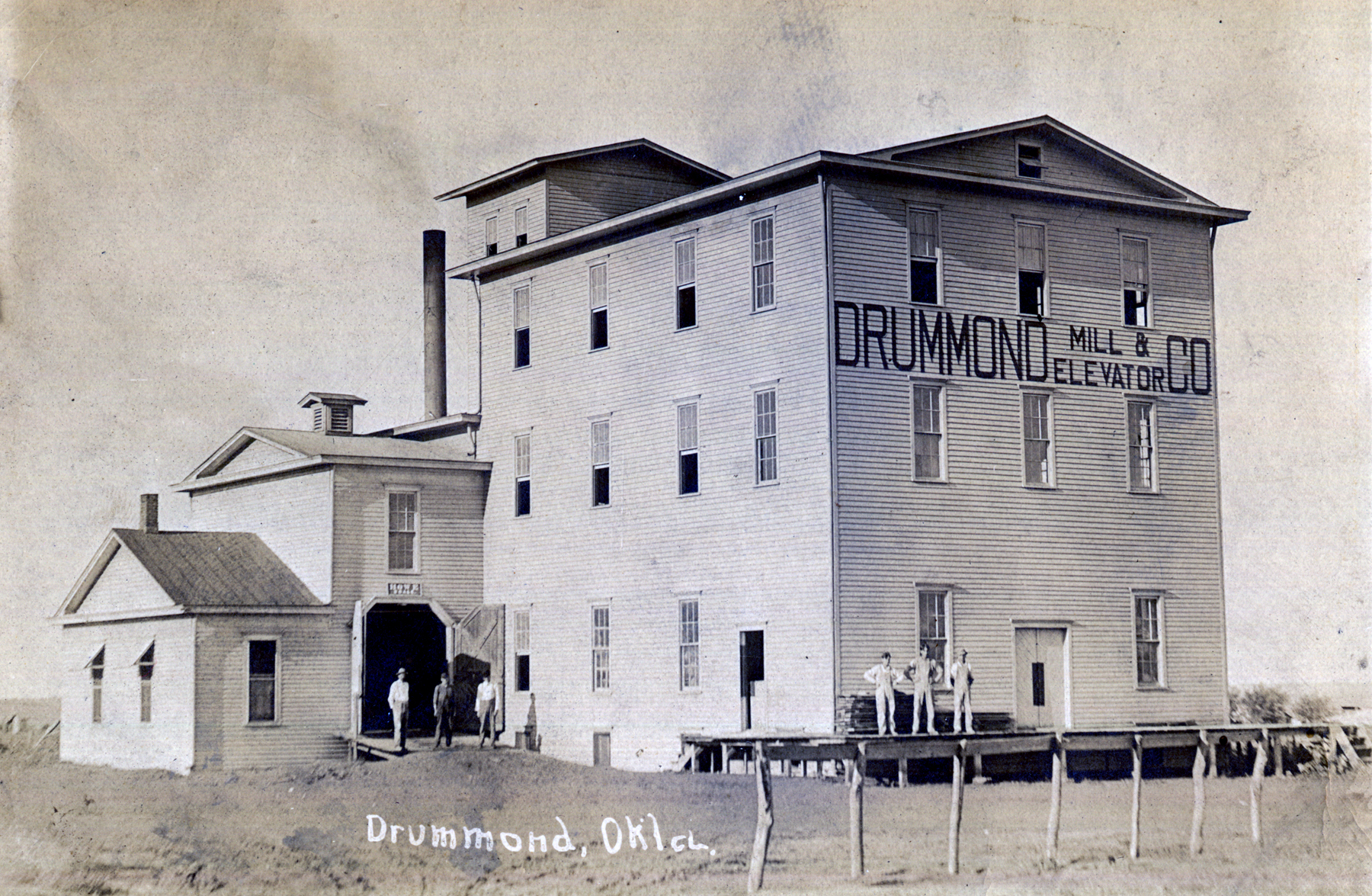 Drummond Mill and Elevator Company, circa 1915
(22067.6, Ft. Worth Museum of Science and History Collection, OHS).

Located in southwestern Garfield County on State Highway 132, seven miles south of its junction with U.S. Highway 60, Drummond is situated about 7.5 miles due southwest of Enid, the county seat. The surrounding region opened to settlement in 1893 as part of the Cherokee Outlet, and Sheridan Township, in which Drummond developed, was soon dotted with prosperous wheat farms. By 1900 the township had a population of 637 and at 1907 statehood, 709.

The Frisco Town Company, represented by Ed Peckham, developed Drummond, obtaining one hundred acres in 1893 and then filing a plat on July 21, 1901. This was done as the Blackwell, Enid and Southwestern Railroad (BES) built a line from Blackwell in Kay County through Enid and Drummond to Darrow in Blaine County in 1900–1901. The promoters sold lots and apparently named the town for a financial backer of the St. Louis and San Francisco Railway, the parent company of the BES. A postal designation was given in July 1901, with Rodman F. Bennett as postmaster.

A 1909 population of approximately three hundred grew to about 350 by 1918 as the town became a service center. By that time, the vicinity's very productive wheat farms supported Blackwell Milling and Elevator, Enid Mill and Elevator, and Farmers Elevator, as well as the Patent Gleaner Company, F. E. Ellsworth, president. The Bank of Drummond handled residents' financial affairs, and a half-dozen stores of various kinds provided wares. The prosperous townspeople kept two blacksmiths and two automobile dealers in business and could attend a Congregationalist church or a Christian church. A school constructed circa 1902 was expanded several times. Newspapers informing the citizens during the early twentieth century included the Drummond Herald, the Messenger, the Drummond Messenger, and the Drummond Times.

The agricultural depression of the post–World War I years created a temporary shift from wheat to cotton farming, and one gin was constructed. However, wheat soon returned to prominence. The local economy was aided by nearby oil discoveries in the 1920s, and drilling and production activity provided some employment for years to come. Nevertheless, the number of businesses declined after World War II as residents drove to Enid to shop.

Drummond's first official census, taken in 1920 after the town incorporated, tallied 292, a number that remained fairly steady through the 1960s. By 1970, 326 people lived there, and the population peaked at 482 in 1980, the growth due to a recent oil boom. Although Drummond lies in an agricultural area and still relies on agribusiness, many residents commute to work in Enid. The 2000 census counted 405 inhabitants, and the 2010 census registered an increase to 455.

The following (as per The Chicago Manual of Style, 17th edition) is the preferred citation for articles:
Dianna Everett, “Drummond,” The Encyclopedia of Oklahoma History and Culture, https://www.okhistory.org/publications/enc/entry.php?entry=DR006.