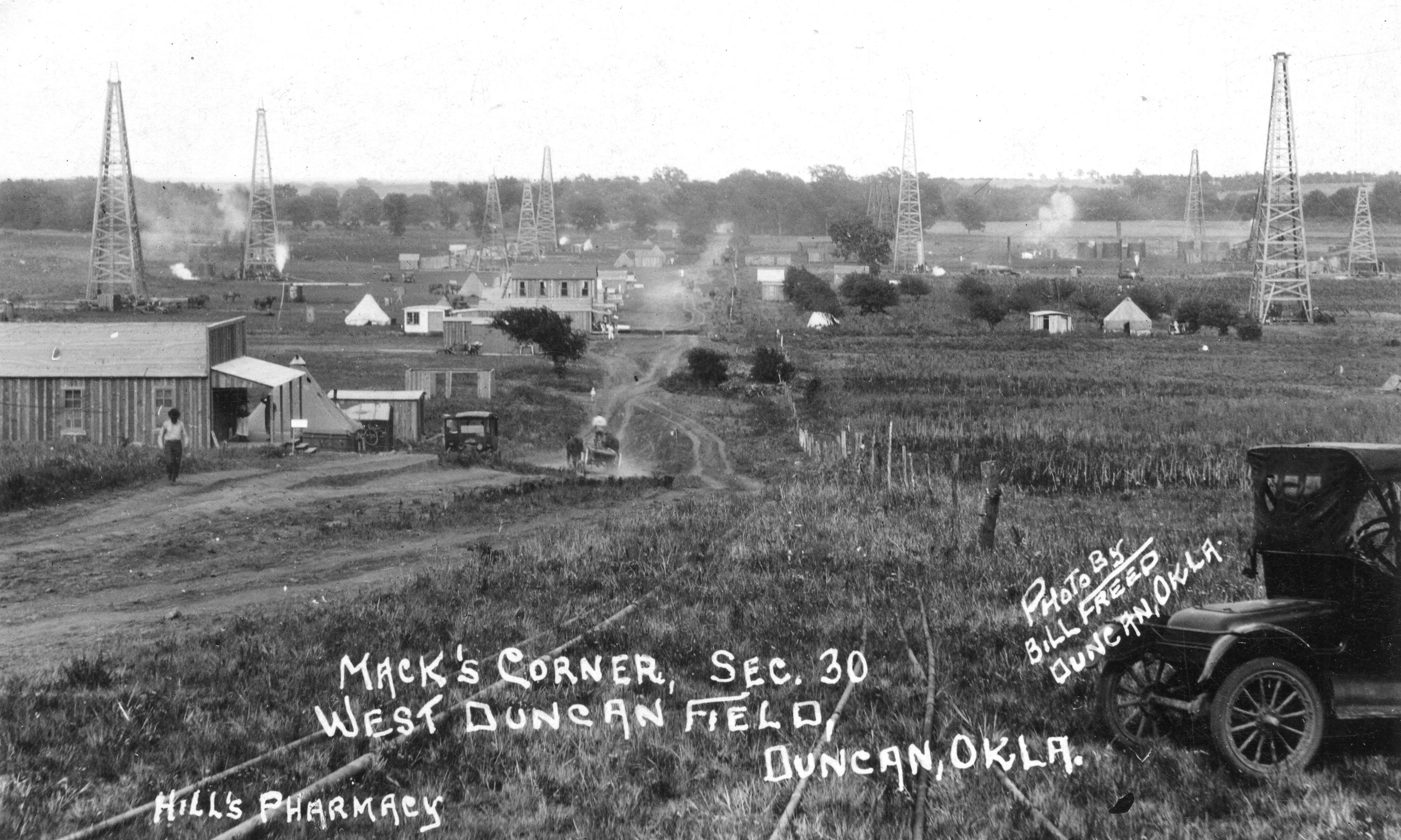 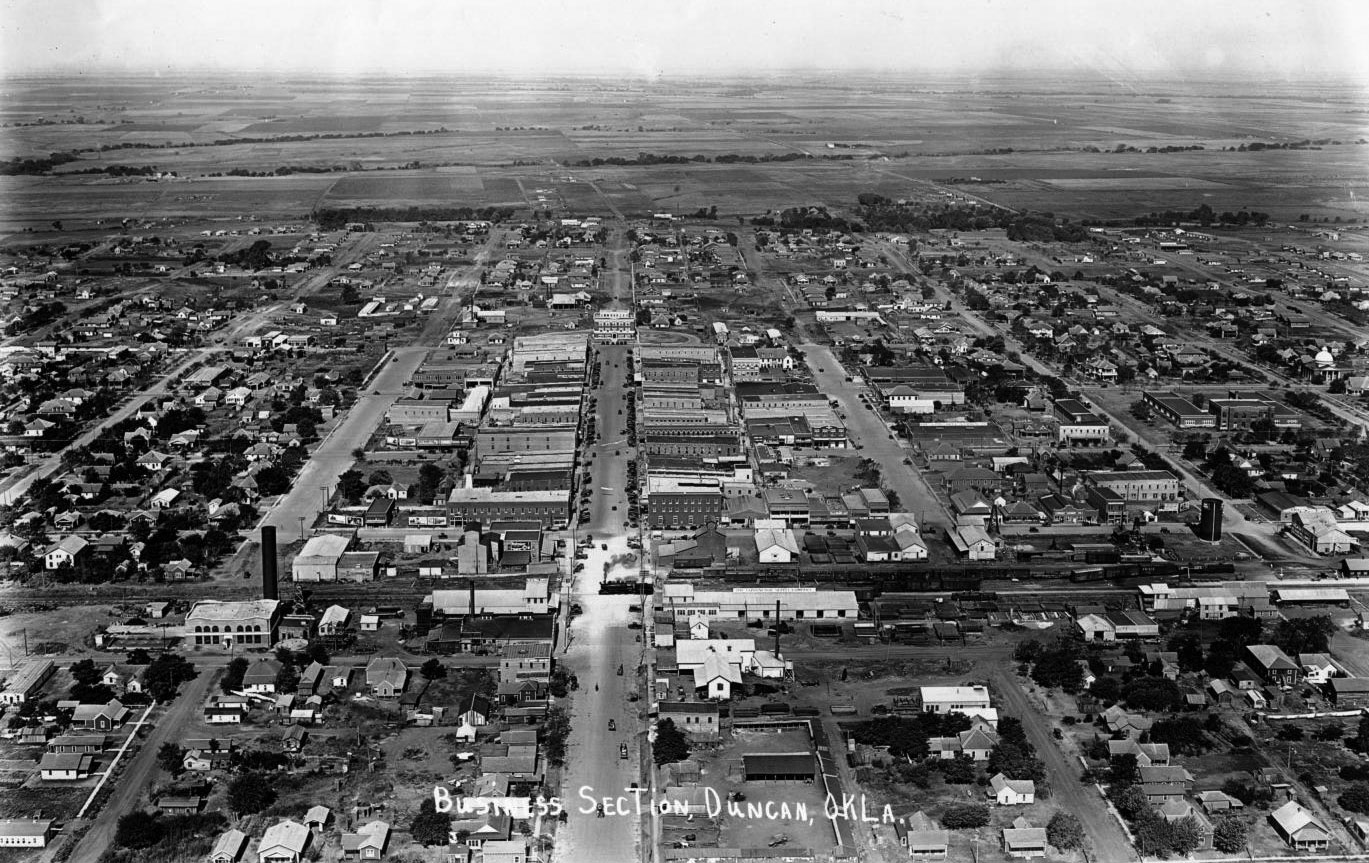 The county seat of Stephens County, Duncan is centrally located in the western half of the county. In addition to being traversed by north-south U.S. Highway 81, the community is crossed by east-west State Highway 7, which connects to Lawton on the west and, eventually, to Interstate 35 on the east. Duncan is forty miles south of Chickasha, thirty-two miles southeast of Lawton, eighty-one miles southwest of Oklahoma City, and forty-four miles north of the Oklahoma-Texas State line on U.S. Highway 81. William Duncan established the Duncan post office in April 1884, five years after taking over a trade store located on Cow Creek along the Chisholm Trail, about three miles northeast of the present community. Learning of the impending construction of a rail line through Indian Territory by the Chicago, Rock Island and Pacific Railway (CRI&P), Duncan and his wife, Sally, a legal member of the Chickasaw Nation, claimed five hundred acres in the path of the railroad. Although restricted by the laws of Indian Territory, which prohibited the exchange of land, the Duncans laid out a townsite and began to offer lots for lease, promising legal title when the federal restrictions were lifted. As predicted, the CRI&P came through the community in 1892, providing a critical transportation link. Five years later the Atoka Agreement of 1897, which provided for the allotment of the Chickasaw and Choctaw lands, lifted the prohibitions concerning the legal exchange of land in Duncan. In 1901 a federal townsite survey added an additional 540 acres to the developing town.

With the advent of 1907 statehood Duncan was named the county seat of newly formed Stephens County. This designation has quietly continued to benefit the community, making it a governmental and political center for the county. The first Stephens County Courthouse was constructed in Duncan in the early 1920s, and the present courthouse was erected in the late 1960s.

During the first decade of the twentieth century Duncan was thriving, due largely to the surrounding agricultural community. By 1909 the town had nearly 150 commercial establishments, including several cotton gins, a flour mill, two gristmills, and an implement dealer. While agriculture has remained an important economic support for the town to the present day, the opening of oil wells in southeastern Stephens County in 1918 ignited explosive development. Prudently, the Duncan community immediately prohibited the construction of shacks and aggressively policed other boomtown activities to ensure that the city would grow substantively in an orderly, permanent fashion.

In the 1920s a variety of oil-related industries opened in Duncan. Foremost among these was Halliburton Oil Well Cementing Company. Founded by Erle P. Halliburton, the company has been at the forefront of oil-field technology since the beginning. By the 1930s Halliburton operated in oil fields worldwide but has always maintained a facility in Duncan. In the mid-1950s, the company employed 1,750 people there, equaling 25 percent of the city's working population. Despite the removal of corporate headquarters of Halliburton Energy Services to Dallas in 1961 and despite downturns in the 1980s, the company's manufacturing presence continues to be Duncan's economic mainstay to the present time.

An oil town would hardly be self-sufficient without a refinery. Duncan's Rock Island Refinery, established in 1922, employed one hundred people by 1936 and had a daily capacity of 6,500 barrels of crude oil. The facility was partially shut down in 1949, with the rest being sold in 1953 to a Sun Oil Company predecessor. In the mid-1940s the Associated Refineries, Inc., a group of eight refining companies from Oklahoma and Texas, including Duncan's Rock Island Refinery, constructed a 100-octane aviation gasoline refinery in the vicinity. Financed by Defense Plants Corporation, a subsidiary of the Reconstruction Finance Corporation, the plant was intended to supply airplane fuel for military operations during World War II. In 1947 the Sunray Oil Company bought that plant, and it became a Sun subsidiary when DX Sunray and Sun Oil Company merged in 1969. The refinery was purchased by Tosco in 1980 and continued to operate for several years before finally closing in the mid-1980s.

The Duncan Banner has kept the community informed for decades and continued to do so into the twenty-first century. Other newspapers in the city have included the Duncan American and the Duncan Eagle, which were also published as the Duncan Weekly Eagle and the Duncan Morning Eagle. The Justice ran for a brief period in the first decade of the twentieth century, and the Oklahoma Socialist published for a short time around 1910.

Several houses in Duncan have been recognized for their architectural significance in the city. These include the H. C. Chrislip House (NR 93000677), the Brittain-Garvin House (NR 00001039), the Louis B. Simmons House (NR 01000207), and the W. T. Foreman House (NR 03000512). Two Depression-era properties, the Duncan National Guard Armory (NR 96001490) and the Duncan Public Library (NR 99001427), also stand out for their historic and architectural importance to the community. The armory now houses the Stephens County Historical Museum. Properties consequential in the historic development of Duncan include the Johnson Hotel and Boarding House (NR 86001098) and the Patterson Hospital (NR 95001417).

As a regional cultural nexus Duncan is also home to the Chisholm Trail Heritage Center, which is a museum facility, and to the L. B. and Ola Simmons Community Activities Center, a recreation and convention center. Educational amenities include Red River Technology Center, which is a branch of the state vocational-technical training system, and a satellite campus of Cameron University. Duncan maintains a council-manager form of government under a home rule charter.

The following (as per The Chicago Manual of Style, 17th edition) is the preferred citation for articles:
Cynthia Savage, “Duncan,” The Encyclopedia of Oklahoma History and Culture, https://www.okhistory.org/publications/enc/entry.php?entry=DU005.