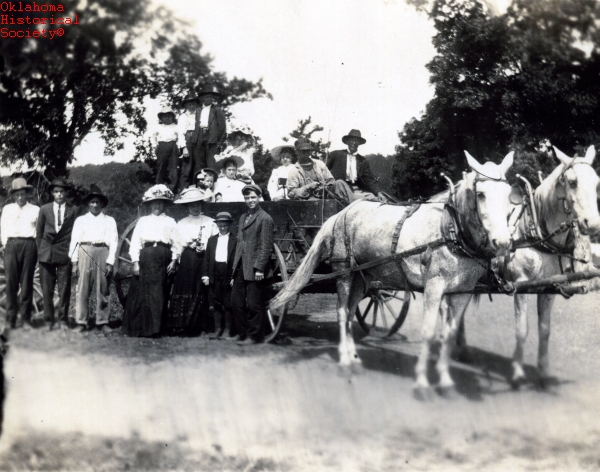 Students and others at Dwight Mission in 1917
(7706.E, Board of National Missions Album Collection, OHS). 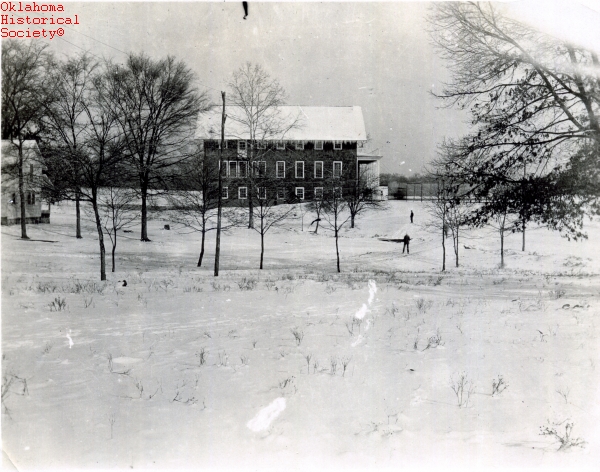 View of Dwight Mission School
(7706.A, Board of National Missions Album Collection, OHS).

Part of the missionary effort of the American Board of Commissioners for Foreign Missions (ABCFM), Dwight Mission was an evangelistic venture and an offshoot of work being done among the Cherokees in the American South before removal. Congregationalist ministers Cyrus Byington and Cyrus Kingsbury had been sent by the ABCFM in 1817 to establish Brainerd Mission for the Cherokees in Tennessee. When many Cherokees moved to new lands west of the Mississippi River, in present northwestern Arkansas, Congregationalist missionaries Rev. Cephas Washburn, Rev. Alfred Finney, and other men went also. In late August 1820 the party chose a site on Illinois Bayou (near Russellville, in present Arkansas), built a log building, and named the site Dwight Mission, after Rev. Timothy Dwight, president of Yale University and an early member of the ABCFM. By May 1821 Dwight was in operation, and it produced two branch missions among the Arkansas Cherokees.

In 1828 a new treaty between the United States and Cherokees mandated that entire nation's removal westward, this time into present Oklahoma. In May 1829 Dwight Mission was reestablished on Sallisaw Creek, in Sequoyah County near Marble City, about twelve miles above the confluence of Sallisaw Creek and the Arkansas River and thirty miles east of Fort Gibson. The other two missions moved west as well, one becoming Fairfield and the other, Park Hill. Quickly, the Dwight missionaries on Sallisaw Creek erected a double log house for a teacherage and girls' schoolroom and several one- and two-story log houses for the staff.

Eventually the facility had twenty-one houses, a large dining hall, a barn, and outbuildings. A school opened May 1, 1830. At its height Dwight Mission accommodated more than a dozen staff, including preachers, teachers, industrial instructors, and eighty students. During the Civil War several buildings were burned. The last religious service was held there in November 1862 before the complex was abandoned. The property later went into private hands and was little used. By 1884 only two of the original buildings remained standing.

In 1886 the Cherokee National Council reestablished the school, and the Presbyterian Women's Board of Home Missions provided funds. A large building was erected as a boarding facility for Cherokee girls. Dwight remained open until 1895, after which it served as a day school. It reopened in 1900 as a boarding school for boys and girls. A 1944 report indicated that Dwight Indian Training School consisted of nine buildings on eighty-six acres, operated under the Board of National Missions of the Presbyterian Church USA, and served seventy-one students, mostly Cherokee and Choctaw. The school closed in 1948. In 1950 the property was purchased by the Presbyterian Church USA, and at the end of the twentieth century the Eastern Oklahoma Presbytery continued to maintain the facility as a retreat and conference center.

The site lies three miles southwest of present Marble City. Dwight Mission was listed in the National Register of Historic Places in 1973 (NR 73001570).

William E. Strong, The Story of the American Board (Boston: Pilgrim Press, 1910).

The following (as per The Chicago Manual of Style, 17th edition) is the preferred citation for articles:
Dianna Everett, “Dwight Mission,” The Encyclopedia of Oklahoma History and Culture, https://www.okhistory.org/publications/enc/entry.php?entry=DW001.