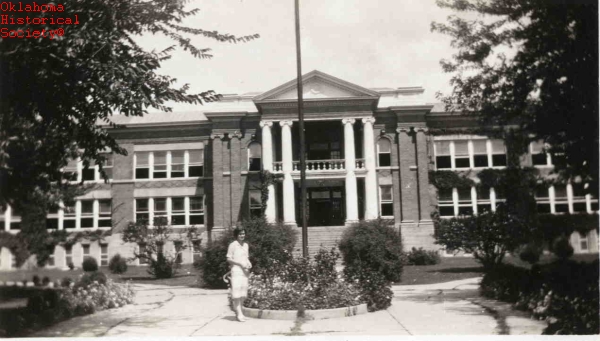 Three normal schools were established in eastern Oklahoma in 1909, one of which was East Central College (now East Central University, ECU). Three similar institutions had been established during the Territorial Era in western Oklahoma. Each provided preparatory education, including two years of college leading to teacher certification.

Ada's selection as the college's location followed intensive lobbying efforts by the 25,000 Club, a local booster group that also raised funds for faculty salaries so that classes could begin in autumn 1909 in local churches and public school classrooms. The 1910 legislature appropriated funds for faculty salaries and a building, which was constructed later that year on a sixteen-acre site donated by Dan Hayes, a Chickasaw allottee.

In 1919 the six normal schools became teachers' colleges and began to confer bachelor's degrees. In 1939 they added degree programs in arts and sciences and were designated as state colleges. In 1954 the six colleges were authorized to offer their first graduate work in a fifth-year program for teachers. Other master's degree programs have since been added. In 1974 East Central College became East Central Oklahoma State University, and the name was changed to East Central University in 1985.

ECU has had only six presidents during its history: Charles Briles, James Gordon, Adolph Linscheid, Charles Spencer, Stanley Wagner, and Bill Cole. Distinguished alumni include three governors. Those serving Oklahoma were George Nigh and Robert S. Kerr, who is also noted for his career in the U.S. Senate. Ernest McFarland, governor of and congressman from Arizona, was a classmate of Kerr's. Numerous Chickasaw and Choctaw governors and officials also graduated from the university. Among Oklahoma universities ECU stands out for its pioneering efforts and special programs, including promoting access to handicapped students, developing corresponding undergraduate and graduate degree programs for rehabilitation services, and initiating services for the hearing impaired. At the turn of the twenty-first century the campus consisted of thirty-seven buildings on 135 acres, and the university typically enrolled more than four thousand students per semester.

The following (as per The Chicago Manual of Style, 17th edition) is the preferred citation for articles:
Alvin O. Turner, “East Central University,” The Encyclopedia of Oklahoma History and Culture, https://www.okhistory.org/publications/enc/entry.php?entry=EA005.