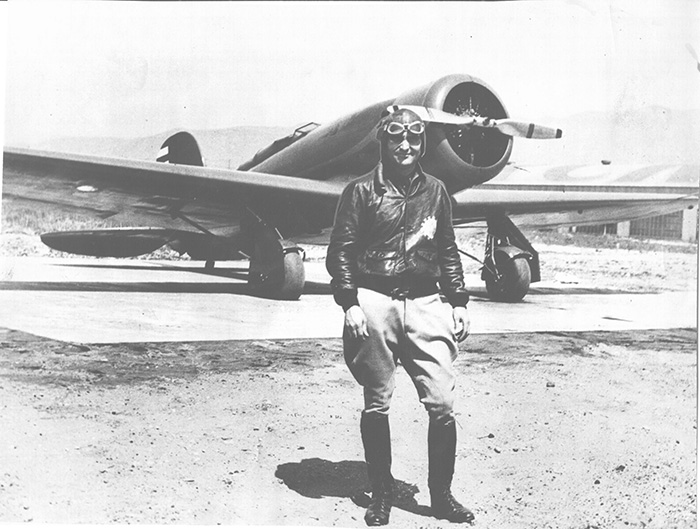 A pioneer aviator, an air-power strategist, and one of the "fathers" of the United States Air Force, Ira Clarence Eaker was born April 13, 1896, in Field Creek, Texas, to Young Yancy and Dona Lee Graham Eaker. The family moved to Kenefic, Oklahoma, in 1912. Ira Eaker graduated from Southeastern State Normal School (now Southeastern Oklahoma State University) at Durant in 1917. After serving as a pilot in World War I, Eaker continued flying. He participated in the 1926 Pan-American Goodwill Flight and in 1929 was the pilot of the Question Mark, setting an endurance record while pioneering air-to-air refueling. He made the first instrument flight across the United States in 1936.

During World War II Eaker commanded the U.S. Army Eighth Air Force and convinced Winston Churchill of the value of daylight bombing. He later commanded Allied Air Forces in the Mediterranean and served as deputy commander of U.S. Army Air Forces. Following retirement in 1947, Eaker headed the Hughes Aircraft Company and was a syndicated columnist. By a special act of Congress he attained four-star status in 1985. Eaker married Leah Chase in 1922, and they divorced seven years later. In 1931 he married Ruth Apperson and was married to her until his death in Washington, D.C., on August 6, 1987.

The following (as per The Chicago Manual of Style, 17th edition) is the preferred citation for articles:
Keith Tolman, “Eaker, Ira Clarence,” The Encyclopedia of Oklahoma History and Culture, https://www.okhistory.org/publications/enc/entry.php?entry=EA010.