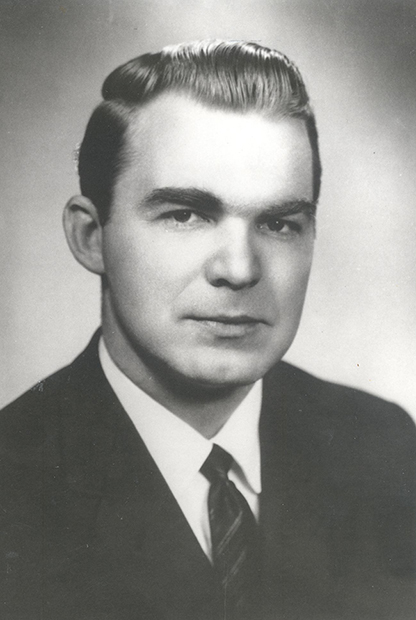 Oklahoma's sixteenth governor was born on September 27, 1925, in Muskogee, Oklahoma, to Edmond Augustus and Esther Pullen Edmondson. The elder Edmondson instilled a love of politics in both J. Howard and his older brother, Ed, a long-term congressman. J. Howard graduated from Muskogee High School, briefly attended the University of Oklahoma, and joined the U.S. Army Air Corps in 1942. Edmondson completed flight training but did not serve overseas. After the war he graduated from the university with a law degree in August 1948. He had married his childhood sweetheart, Jeannette Bartleson, in May 1946, and the couple had a son, James, Jr., and two daughters, Jeanne and Patricia.

After graduating, Edmondson returned to Muskogee and served as law clerk for Federal Judge Eugene Rice before joining Harold Shoemake in the practice of law. Unsuccessful in a race for a seat in the legislature in 1950, he moved to Tulsa in 1953, accepting an appointment by Tulsa County Attorney Robert Wheeler. Edmondson's reputation as a successful prosecutor grew rapidly after he obtained convictions of several corrupt county and state officials. In 1954, when Wheeler did not seek reelection, Edmondson was elected Tulsa County attorney. He was reelected in 1956.

Edmondson announced his candidacy for governor on December 7, 1957. Reform became the hallmark of his campaign and administration. A political unknown, Edmondson won the Democratic primary and then crushed his opponent in the general election, winning by the largest margin in the state's history. At age thirty-three Edmondson became the youngest governor in the state's history and in the nation at the time.

Edmondson interpreted his victory as a public mandate for reform. Many "old guard" members of the legislature disagreed. Edmondson had promised to send a proposal to repeal prohibition to a vote of the people while strictly enforcing the law. True to his pledge, as the legislature worked on the referendum, he vigorously enforced prohibition. Oklahoma came closer to being truly "dry" than ever before. Repeal passed overwhelmingly.

By the end of the longest legislative session in the state's history, Edmondson had gained many reforms. In addition to repeal of prohibition and a liquor control measure, he had persuaded the legislature to adopt a merit system, central purchasing, a withholding tax plan, and several "housekeeping" measures that eased the strain on state finance. He had also obtained a financing plan for two state turnpikes and creation of the Oklahoma Capitol Improvement Authority.

Many of his other proposals were rejected, including a constitutional highway commission, a legislative apportionment proposal, and the removal of gasoline tax revenues from control of county commissioners. Undeterred, Edmondson quickly began to push these three proposals through initiative petitions. All three petitions failed. In pushing their adoption Edmondson permanently alienated important elements of the Democratic Party, and by the fall of 1960, only half way through his term, he had lost his mandate.

The balance of his term saw little in the way of additional reform. He successfully defeated attempts to repeal the gains from the 1959 legislative session but achieved little more. Then two weeks before his term ended, when it seemed Edmondson's political career was at an end, one of Oklahoma's U.S. senators, Robert S. Kerr, died. This allowed Edmondson to arrange his own appointment to a Senate seat and gave him sixteen months to rebuild his political support.

In 1964 Edmondson bid for a full term but was defeated. His fight for reform had earned him too many enemies. He had neglected to mend political fences, and he angered the Kerr family and friends by not appointing Robert Kerr, Jr., to his father's vacant seat. In 1964 the Kerr organization and money helped retire Edmondson permanently to private life.

From the end of his brief term in 1965 until his death of an apparent heart attack in 1971, Edmondson was a private citizen engaged in the practice of law. At his death Oklahomans were beginning to realize their state was better because he had served them as governor. Before he was forty years old, J. Howard Edmondson had achieved more significant reform than any governor before him and had produced one of the most colorful eras in Oklahoma's political history.

The following (as per The Chicago Manual of Style, 17th edition) is the preferred citation for articles:
Billy Joe Davis, “Edmondson, James Howard,” The Encyclopedia of Oklahoma History and Culture, https://www.okhistory.org/publications/enc/entry.php?entry=ED005.