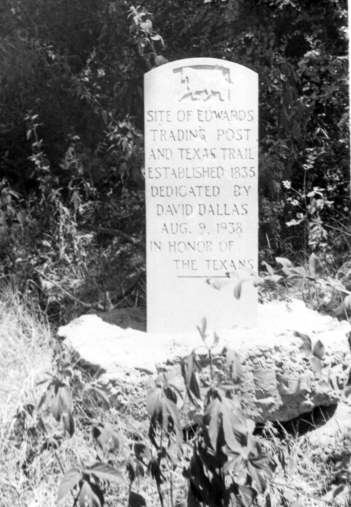 Established circa 1835, Edwards's Post was an important frontier trading station. Located southeast of present Holdenville in Hughes County, the enterprise was situated on the right bank of Little River about three miles above its confluence with the Canadian River. The post was also known as Edwards's Settlement and Fort Edwards. The latter designation was due to its close proximity to Camp Holmes, an army outpost established in 1834.

The proprietor of Edwards's Post was James Edwards, a white man with a Creek wife and children. He and his partner named Shelton, of whom little is known, were licensed Indian traders. A trail led from the trading house to the Colorado River in Texas. The Comanche, Kickapoo, and other tribes utilized the path to exchange furs, mules, and captives at Edwards's Post. Jesse Chisholm worked as a trader for Edwards and Shelton and married Edwards's daughter, Eliza. Local residents included whites, such as traders Thomas A. Aird and Israel G. Vore, black slaves, and Indians. Inhabitants of neighboring Creek settlements gathered at Edwards's Post when Plains tribes threatened.

During the California Gold Rush of the 1840s Edwards's Post was the last settlement between Fort Smith, Arkansas, and Santa Fe, New Mexico. Situated along the California Road, some 130 miles west of Fort Smith, Edwards's Post was a stop for California-bound travelers, such as those guided by Capt. Randolph B. Marcy in 1849. It served as a resting place where wagons and equipment were repaired and supplies were obtained.

Military expeditions frequently traversed the Edwards's Post vicinity. Dragoons commanded by Capt. Nathan Boone were there in July 1843, as were troops under Lt. James W. Abert in October 1845. Abert described the settlement as "a rude collection of log huts." Edwards's Post declined as traffic lessened on the California Road. No ruins of the site remain.

The following (as per The Chicago Manual of Style, 17th edition) is the preferred citation for articles:
Jon D. May, “Edwards's Post,” The Encyclopedia of Oklahoma History and Culture, https://www.okhistory.org/publications/enc/entry.php?entry=ED008.