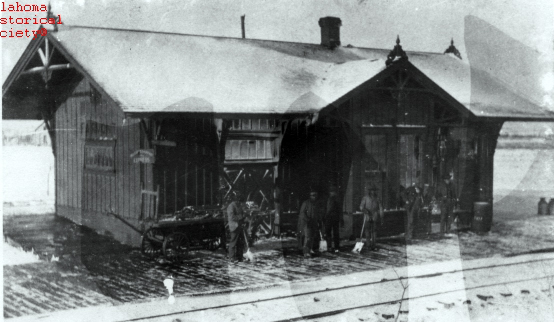 Located ten miles east-southeast of Enid in Garfield County, Fairmont is sited on County Roads N2970/E0450, approximately two miles south of U.S. Highway 64/412. The surrounding Patterson Township began to be settled in 1893 with the opening of the Cherokee Outlet. Homesteaders grew wheat, primarily as a cash crop, and garden crops to sustain their families. The township had 546 residents in 1900. Inhabitants received mail at Luella from 1894.

Fairmont was platted October 18, 1902, by the Enid Right of Way and Townsite Company as the Denver, Enid and Gulf Railroad (after 1907 a property of the Atchison, Topeka and Santa Fe Railway) constructed a line through area in 1902. Town lots were sold in one day by auction and mail-order bids. On the opening day the celebration included a beer wagon. The town was named by John Murphy. Fannie D. Smith was appointed postmaster in December of that year. Edmund Frantz, Enid entrepreneur and brother of future territorial governor Frank Frantz, immediately built a hotel and set up a lumber company. In addition, the Arkansas Valley and Western Railway constructed a branch from Tulsa through Perry and Covington to Steen (northeast of Enid) in 1902–03 (after 1907 owned by the St. Louis and San Francisco, or Frisco Railway). The two railroads crossed at Fairmont, a hub of agricultural services. Two elevators were built along the Frisco and two along the Santa Fe. By 1909 the town's unofficial population was 100, with 648 in Patterson Township.

Religion and education were important to the residents of Fairmont. Many of the township's inhabitants were German immigrants. An Evangelical (German) Lutheran Congregation, which had been established in 1897 by farmers in the area, built a church in 1898. A new one was built in 1904. A school was begun by the church in 1898 west of the community and was moved into town in 1903. From 1910 the church sponsored a youth chapter of a Lutheran organization, the Walther League, which held the largest convention there in May 1922, the largest such meeting of that group ever held in Oklahoma. A Methodist Church established in the early years languished by the 1930s. By 1936 the town supported one public school and two private, church-related ones.

The petroleum industry boomed the local economy in the 1920s. The 1916 oil discovery in Garfield County led to oil drilling everywhere. Near Fairmont a refinery was constructed before World War I, and soon it was enlarged. Fairmont Refining Company became a Champlin Refining Company property in 1925. The U.S. Census recorded 166 residents in 1920, a number that remained steady through World War II. After the war ended, people moved to the cities, but resurgence occurred during an upturn in the oil business. The 1980 census recorded 419, the 1990 census, 129, the 2000 census, 147, and the 2010 census, 134.

The following (as per The Chicago Manual of Style, 17th edition) is the preferred citation for articles:
Dianna Everett, “Fairmont,” The Encyclopedia of Oklahoma History and Culture, https://www.okhistory.org/publications/enc/entry.php?entry=FA006.