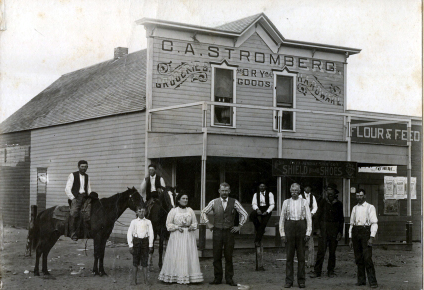 The town of Fargo is located in the northeastern part of Ellis County on State Highway 15, thirteen miles southwest of Woodward. The area around present Fargo was originally included in the Cherokee Outlet and has always been in a transportation corridor. The Fort Supply–Fort Elliott (northeast-southwest) military road and the Western Trail (northwest-southeast) intersected approximately two miles northeast of town at Wolf Creek. In 1887 the Southern Kansas Railway (after 1899 a part of the Atchison, Topeka and Santa Fe Railway) built tracks across the corner of northwestern Oklahoma from Kiowa, Kansas, through Woodward, Fargo, Gage, and Shattuck to Higgins, in the Texas Panhandle. Six years later the region was opened by land run to non-Indian settlement. Oleta Township, the six-mile-area in which Fargo developed, was located in Woodward County until Ellis County was created at 1907 statehood.

One of the new homesteaders was David C. Ooley, who filed a claim on land near Boggy Creek and opened a general store. Later, when the railroad established a way station called Whitehead, Ooley acquired more than eighty acres along and near the tracks. There he built a new store, obtaining a postal designation as Whitehead in October 1893. As a community coalesced around the store, Ooley combined with James R. Bonar, a nearby resident, and William Sears and Robert Moody of Shattuck to form a townsite company. They surveyed and platted for a town that they named Oleta, and the postal designation was changed in August 1901, with Grant W. Bailey as postmaster. For reasons unknown, the designation was changed to Fargo in February 1905. Three years later the town was incorporated from Oleta Township, population 436 at statehood. Local businesses provided market access to the farm families living in the vicinity.

By 1909 Fargo and the surrounding farms generated enough activity to support three churches, a public school, the Fargo Journal newspaper, and a telephone connection. Two banks provided financial services, and the Alfalfa Milling Company and Alva Roller Mills processed crops. Three general stores and other retail outlets prospered. Despite a fire in 1909 that destroyed all of the east side buildings on Main Street, the population in 1910 was 341. By the time of World War I, however, the census counted fewer than three hundred. One bank, two general stores, and a number of other retailers still operated. Newspapers published in Fargo have included the Signal in 1909, the Reporter and the Republican in the 1910s, and the Statesman in the 1930s.

During the 1940s and 1950s, with a population of 291 in 1940, Fargo still supported two grocery stores, two implement dealers, two farmers' cooperatives (wheat elevators/grain dealers), and several service stations. Fargo's Stock Exchange Bank building is listed in the National Register of Historic Places (NR 83004173). The community's population from 1940 through 1960 hovered at approximately three hundred. Growing slightly, Fargo finished the twentieth century with a population of 326 and grew to 364 in 2010.

The following (as per The Chicago Manual of Style, 17th edition) is the preferred citation for articles:
Dianna Everett, “Fargo,” The Encyclopedia of Oklahoma History and Culture, https://www.okhistory.org/publications/enc/entry.php?entry=FA011.