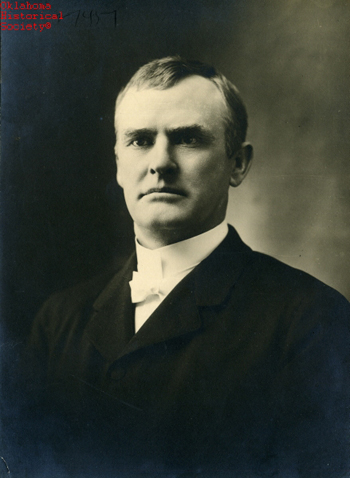 An Oklahoma territorial governor born near Des Moines, Iowa, in 1857, "T. B." Ferguson grew up on a family farm in Kansas. Early education in country schools led him to Emporia State Normal College, from which he graduated in 1884. He financed his academic career by teaching in small schools, and after graduating he took additional training in Kansas and in Iowa. After two years of teaching, he changed occupations and became a Methodist minister. Always interested in new experiences, he began to write articles for small-town newspapers in Kansas during his ministerial career. In 1885 he married Elva Shartel, daughter of the editor of the Sedan, Kansas, newspaper. In 1890, when Elva's father died, Ferguson took over the newspaper and at last found a permanent career.

In 1889 the editor's adventurous spirit led him to take part in the Land Run of 1889. But after staking and then relinquishing a claim in central Oklahoma, he returned to Kansas. Exposure to the developing Oklahoma country had piqued his interest, and in 1892 he and Elva loaded a wagon with their children, the family's belongings, and a printing press, and moved to the newly opened Cheyenne and Arapaho country of western Oklahoma. There the Fergusons cooperated in producing the Watonga Republican. The crusading editor used his paper to campaign for "law and order" candidates and for the prohibition of alcohol.

A leader of the Oklahoma Territory Republican Party T. B. Ferguson was selected by Pres. Theodore Roosevelt to be territorial governor in 1901. Although disinclined to political service, which he compared to "broncho busting," he accepted the nomination and quickly proved one of the territory's most effective governors. A strong leader, "Honest Tom" strove for cooperation between the legislature and the governor's office, especially in preventing deficit spending. An experienced educator, he proposed and promoted legislation and appropriations to improve the quality of education at all levels from elementary through college. To protect the developing farm and ranch industries he pushed through laws for stronger quarantine regulations, more livestock inspectors, and a territorial board of agriculture.

His favorite cause, however, was the pursuit of statehood for Oklahoma Territory. In letters and reports to the Interior Department Ferguson trumpeted the virtues of the territory's people and the strength of its economy. When Congress rejected the concept of statehood for each of the Twin Territories, he switched his allegiance to the single-state concept and persuaded the territorial Republican Committee to do so as well. His support greatly increased the strength of the statehood movement, which succeeded in 1907.

Conflict with his Republican cohorts, specifically Dennis T. Flynn and Bird S. McGuire, hastened Ferguson's political demise. Unsuccessful at smearing the governor with charges of election fraud and financial malfeasance, they took another tack. Both having been territorial delegates to Congress, they persuaded President Roosevelt against reappointing Ferguson in 1905. "Honest Tom" Ferguson served his territory well for four years, longer than any other territorial governor, but was replaced on January 13, 1906, by Frank Frantz.

Although Ferguson returned to the newspaper business in Watonga, he kept his political aspirations. In the state's first congressional election he lost the Senate race to Elmer L. Fulton, and in 1910 the crusading editor lost the Republican gubernatorial nomination to Joe W. McNeal. Thompson Benton Ferguson died in Oklahoma City on February 14, 1921. He has been characterized as "the most successful and progressive of all the territorial governors."

The following (as per The Chicago Manual of Style, 17th edition) is the preferred citation for articles:
Dianna Everett, “Ferguson, Thompson Benton,” The Encyclopedia of Oklahoma History and Culture, https://www.okhistory.org/publications/enc/entry?entry=FE018.