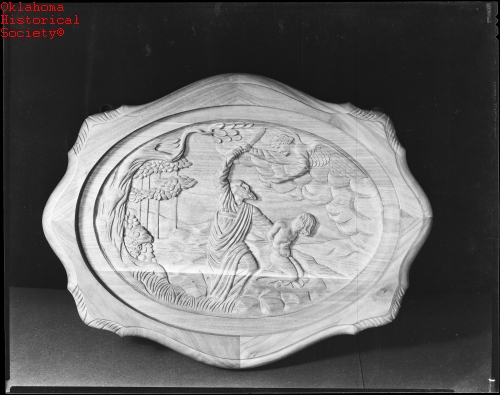 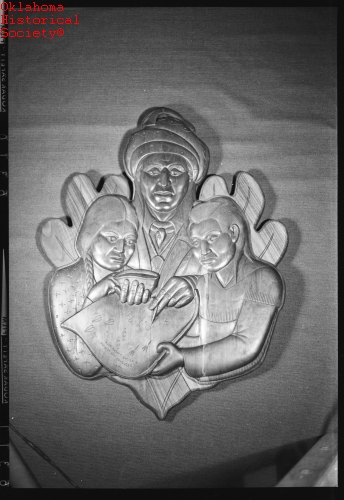 In Oklahoma as elsewhere, "folk art" may refer either to the art produced from within particular group traditions or to the works of individualistic artists. Historically, many of the varied folk art forms arose in conjunction with crafts traditions, but the crafts usually emphasized function more than artistic qualities. Both community-based folk artists and their individualistic counterparts are differentiated from fine arts by their reliance upon materials and tools immediately available, tendency toward relative isolation from cultural mainstreams, routinely ignoring prevailing academic standards of art, and often linking their creations to stories or even didactic teachings. The study of such artists and folk culture in general gives valuable insights into the history and perceptions of common people. It also adds to the evidence necessary to understand the importance of community, place, value, and tradition in society while reminding viewers that the pursuit of beauty or self-expression is not confined to elite segments of society.

Oklahoma's folk culture has long been recognized for its diversity, an indication of the proliferation of cultures that have formed the state's populations. Traditional groups found in the state include those within Oklahoma's American Indian populations who continue to produce baskets, pottery, and other art forms embodying their historic cultural values. Similarly, a number of Mennonite, Amish, and comparable communities maintain long-standing artistic traditions as quilt makers.

The state also has a rich history of artistic endeavors by individualistic artists. Increasingly described by the term "outsider artists," these people apply their vision and skills to the making of paintings, furniture, toys, baskets, canes, signs, tools, religious objects, handwork such as embroidery, and even environmental gardens. Because their art is spontaneous, ingenuous, and unsophisticated, it may not correspond to the appearance of reality or may just seem badly done. The creations of "eccentric" artists are especially likely to appear bizarre, and their large-scale "environmental" creations, which may dominate areas as large as city blocks, frequently lead to conflict. For example, the people near Cheyenne destroyed most of Joseph Muhlbacher's concrete sculptures, regarding them to be obscene. More often, environmental works disappear with the death of the artist, as occurred with the environment Irene Hall created in her yard in Eufaula, Ted Townsend's fantasy sculptures at Hennessey, or Frank Netherlin's bottle and tool garden at Boise City. However, two notable examples of such works remain in Oklahoma. Community arts groups from Oklahoma and Kansas have preserved Nathan Ed Galloway's concrete totems and other sculptures near Foyil. Another important work may be found at the Holy City of the Wichitas, the site of an annual Easter Pageant near Lawton. Throughout the chapel at that site are varied works by Irene Malcolm, and her paintings on the ceiling suggest parallels with the Sistine Chapel.

Significant differences are evident between folk artists from different regions of the state, particularly among painters. Solon Porter of Fargo and Red Shelite of Dacoma clearly focused on western scenes and landscapes. In contrast, Robbie Trone of Nowata depicted social settings using painting techniques common to southern folk painters. Western Oklahoma was home to Augusta Metcalfe, who is sometimes referred to as "the Grandma Moses of Oklahoma," but her ranch scenes are more typical of western artists such as Charles Russell than of folk painters. The subject matter of other paintings may or may not be linked directly to the artist's location or era. For example, Gracia Halstead of Oklahoma City gained a national reputation for her Jordan River scenes, which once graced the walls of the enclosures around baptisteries used for the immersion of converts in more than seventy churches in dozens of states.

Regional differences may also be found in other folk art forms. Bottle or gourd trees are relatively common in the eastern half of the state and highly unusual in the west. Similarly, traditional stocking dolls and hillbilly themes are much more common in the east. The best example of this difference may be seen in the work of Rattan's Hazel Cochran, who won awards at the 1951 Chicago folk festival for her stocking dolls.

The largest number of folk artists documented in the state have been wood carvers. The best known are Dewey Ware (of Salina), Earl Eyman (of Drumright), Ned Nethery (of Guthrie), Odys Deckard (of Oklahoma City), and John Balzer (of Hooker). Most of the exemplary carvers were men, but Tessie Carroll of Guthrie also achieved recognition for her carvings as well as for the miniature rock buildings she created. Another female carver, Eunice Duckett from near Baker, worked with her brothers, John and Russell, making alabaster carvings. Ada's J. Kent Smith also used that medium for his creations.

Artists who achieved recognition in other mediums include Morris Tenenbaum and Vena Tipton, who both worked in textiles and who also illustrate the variety of backgrounds and experiences that can be encompassed by the folk arts. Tenenbaum was a Polish immigrant and tailor who lived for his quilted creations and to fulfill his self-appointed duties as the unofficial gatekeeper for the football team at the University of Oklahoma. In contrast, the designs Tipton worked into her hooked rugs reflected her travels in the Orient and the musical training she drew upon as a flutist for Tulsa's symphony.

Although many students of culture once thought folk artists would vanish from the scene with the spread of mass-produced kitsch, their numbers actually grew following the counterculture movement of the 1960s. That movement spawned a significant number of artists who have persisted in efforts to reclaim or adapt the forms of American folk culture. New individualistic artists also continue to emerge, for example, Weleetka's Georgia Pugh, who preserves memories of historic black cultural life in her sculptures. More evidence of the persistence of folk arts can be seen in the increasing prominence of junkyard sculpture. Jim Powers of Fargo and Joe Smith of Leedey are probably the best-known practitioners of this art form.

The following (as per The Chicago Manual of Style, 17th edition) is the preferred citation for articles:
Alvin O. Turner, “Folk Art,” The Encyclopedia of Oklahoma History and Culture, https://www.okhistory.org/publications/enc/entry.php?entry=FO003.