Wooden hitching post said to have been in front of the blacksmith shop at Fort Davis, 1914
(4970, Joseph Thoburn Collection, OHS). 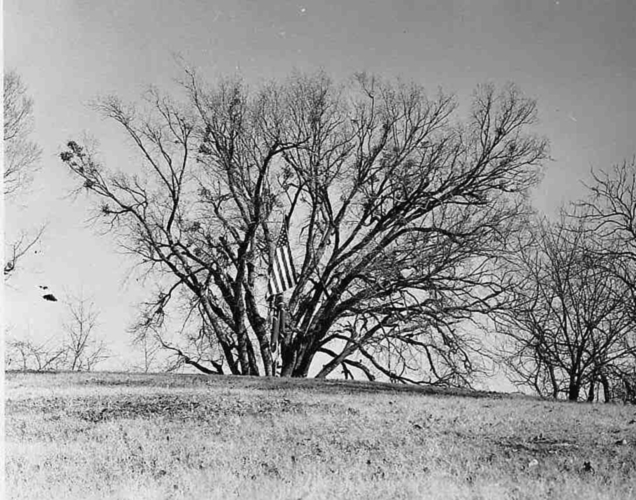 Named in honor of Jefferson Davis, president of the Confederate States of America, Cantonment Davis was the principal Confederate outpost in northern Indian Territory during the Civil War. Located on the south bank of the Arkansas River two and one-half miles northeast of present Muskogee, "Fort" Davis, as it was more commonly called, served briefly as Confederate headquarters in Indian Territory. Ordered built by Brig. Gen. Albert Pike in November 1861, Fort Davis was strategically positioned near the Texas Road. The post surrounded a prehistoric mound that, along with the natural slope of the terrain, helped conceal Confederate activity and provided a clear view of the countryside. Lacking a stockade, Fort Davis consisted of thirteen wooden buildings and covered an area of about eight acres. Troops from the Five Tribes, Texas, and Arkansas garrisoned the post. Following the Confederate defeat at the Battle of Pea Ridge, Arkansas, in March 1862, General Pike, fearing a Union attack, abandoned Fort Davis and moved his troops south, and they constructed Fort McCulloch in the Choctaw Nation. Union troops led by Col. William A. Phillips occupied and burned Fort Davis on December 27, 1862. The site of Fort Davis was listed in the National Register of Historic Places in 1971 (NR 71000670).

The following (as per The Chicago Manual of Style, 17th edition) is the preferred citation for articles:
Jon D. May, “Fort Davis,” The Encyclopedia of Oklahoma History and Culture, https://www.okhistory.org/publications/enc/entry.php?entry=FO032.