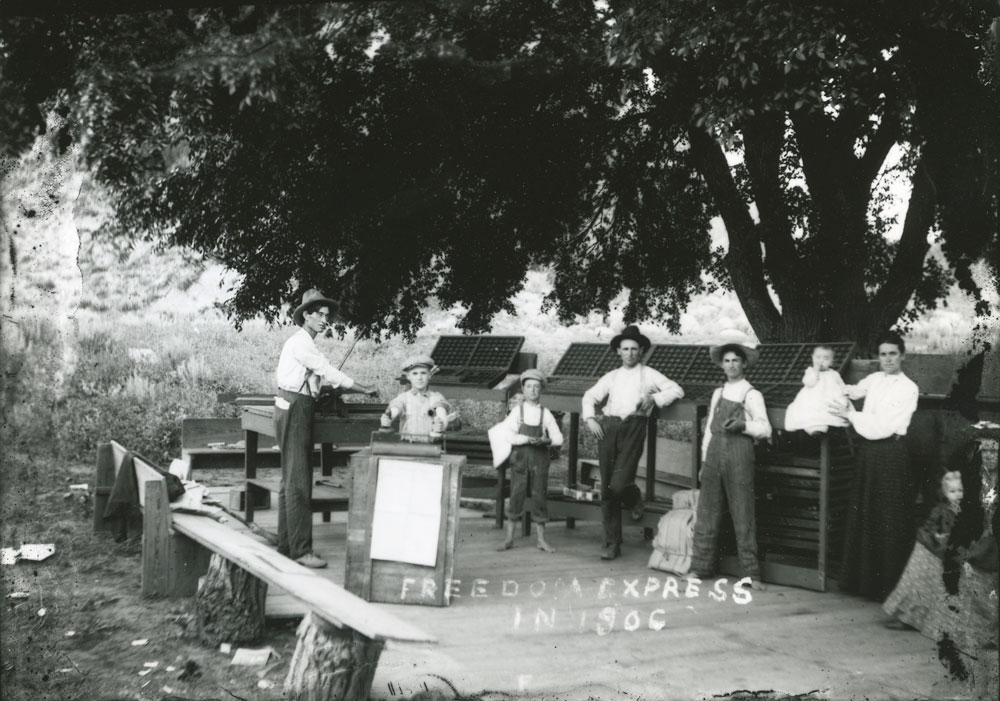 Located in Woods County on the banks of the Cimarron River, Freedom lies twenty-five miles west of Alva, Oklahoma, on State Highway 64 and three miles south of the junction of State Highways 64 and 50. Freedom began as a small settlement in the late 1800s as the result of the Cherokee Outlet (Strip) Land Run of 1893 and the building of the Buffalo and Northwestern Railroad in 1917–20. Early settlers in the area were ranchers and farmers. The Post Office Department named the community Freedom in 1901 after it granted the area a post office. Mrs. Adlah Annis was the first postmaster. Freedom was incorporated as a town in 1925 with a population of 251. The community's primary economic base has been beef and wheat production. Early pioneers to the area were self-sufficient, and many homesteaded 160-acre tracts after the Cherokee Outlet was opened for settlement. At the turn of the twenty-first century beef, wheat, and feed grain production continued as important industries.

Salt is another major commodity produced in the Freedom area. Salt flats lay along the Cimarron River west of the town. In 1822 I. J. M. Harsha, the county surveyor and civil engineer for Reno County, Kansas, surveyed and mapped the area. Subsequently, the federal government leased the salt flats from the Cherokee Nation. While the federal government never produced salt, area farmers and ranchers easily accessed the necessary commodity. In 1935 Ezra Blackmon opened a salt factory and began mechanized production. The plant could process one hundred tons a day. In 1982 Cargill Incorporated purchased the salt plant from Blackmon and began operations in 1988. At the end of the twentieth century the Cargill plant continued as one of the community's largest employers.

Freedom is home to Alabaster Caverns State Park, the largest gypsum cave in the world open to the public. It is located six miles south of Freedom on State Highway 50. Freedom is also known for the Battle of Turkey Springs, which occurred approximately ten miles northeast of town in 1878; the engagement was the last known encounter between U.S. Army cavalry and American Indians in Oklahoma. Freedom is home to the "Largest Open Rodeo and Old Cowhand Feed" in the West and is also the smallest Certified City in Oklahoma. The U.S. Census recorded 350 residents in 1920, 364 in 1940, 268 in 1960, 339 in 1980, 271 in 2000, and 289 in 2010.

John Cable, The Birth of Freedom: How a Town Came To Be (Freedom, Okla.: Freedom Public Schools Library, 1996).

Petition and Application for the Incorporation of the Town of Freedom, Woods County, Oklahoma, Woods County Clerk Office, July 1925.

The following (as per The Chicago Manual of Style, 17th edition) is the preferred citation for articles:
Kay Decker, “Freedom,” The Encyclopedia of Oklahoma History and Culture, https://www.okhistory.org/publications/enc/entry.php?entry=FR018.