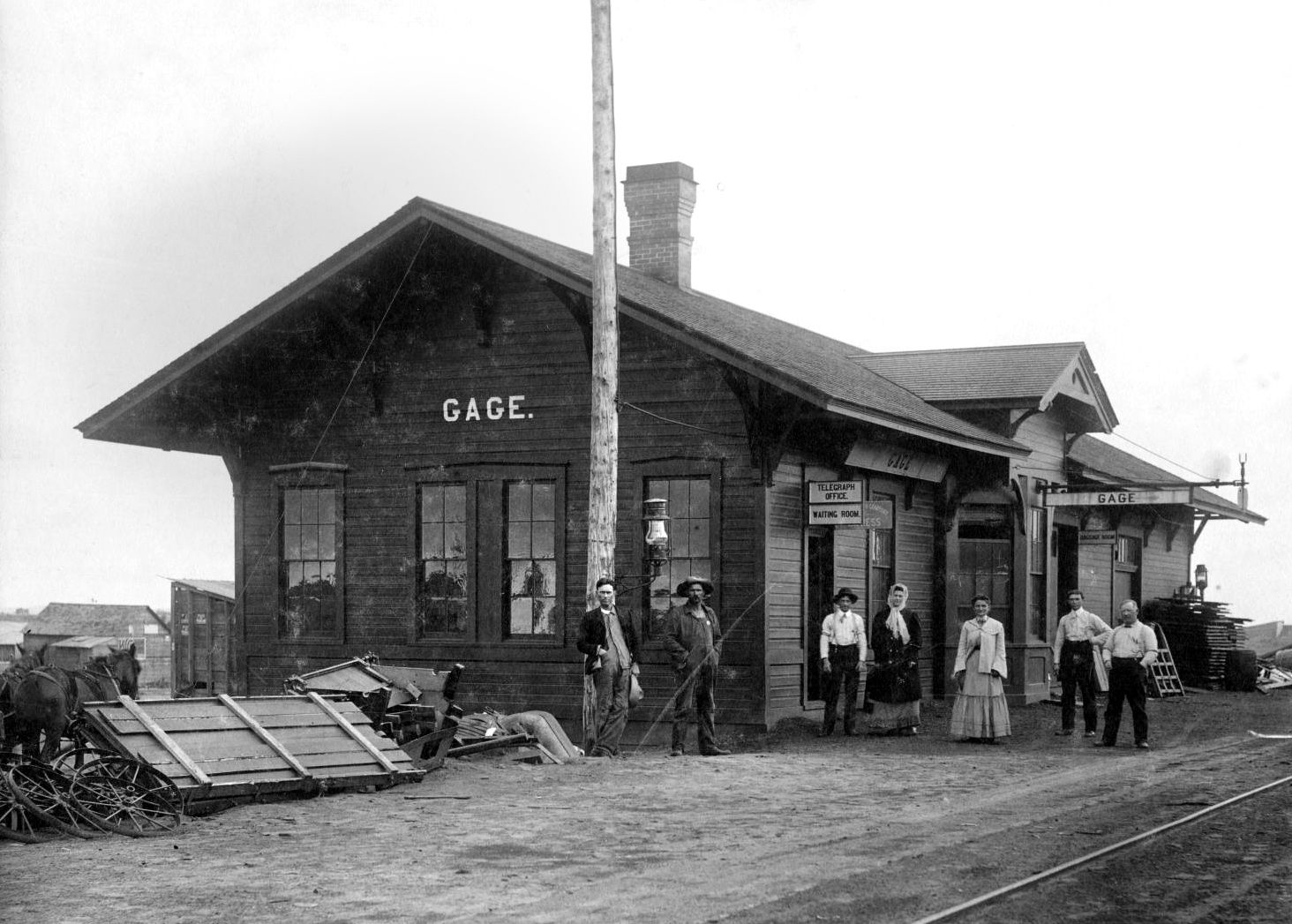 Located in the central part of Ellis County on State Highway 46, thirteen miles north of Arnett, the county seat, and on Highway 15, twenty-one miles southwest of Woodward, Gage developed primarily because of transportation access. The military road from Fort Supply to Fort Elliott/Mobeetie, Texas, passed near the future town, and two miles to the northwest a stage stop existed at the confluence of Little Wolf and Wolf creeks. In 1887 the Southern Kansas Railway (later part of the Atchison, Topeka and Santa Fe Railway) constructed a line across northwestern Oklahoma from Kansas to the Texas Panhandle. A station called Gage, for a Chicago railroad financier, was established in July near Wolf Creek. Once the domain of various Plains Indian groups, by that time this region had become part of the Cherokee Outlet, opened to settlement by a land run in September 1893.

After that, Woodward County included the location of future Gage. A year after the run several settlers, including John Barr and Frederick D. Webster, took up land near the railroad stop. A post office was designated in February 1895, with Webster as postmaster. By 1898 the community was big enough to support six stores, a hotel, and a sawmill. In 1901 activity surrounding the opening of the Kiowa-Comanche-Apache lands, to the south, attracted new people to the town and farmers to purchase land nearby. The town's residents voted to incorporate a six-block area in May 1904. Eighteen months later, on one of her lecture tours through Oklahoma Territory, antiliquor campaigner and Guthrie resident Carry Nation made a brief visit to Gage's saloons and met a cold reception. In 1907, when Ellis County was created, taking in this part of Woodward County, Gage's 1907 population stood at 755 and in 1910 at 924, the all-time peak.

The growing community served as a cattle- and grain-shipping point for the surrounding area. Prosperity in the first decade after incorporation attracted two banks, five lumberyards, and more than two dozen retail establishments. Two cotton gins, a roller mill, and three elevators served farmers. The Brennecke Metal Manufacturing Company made water and stock tanks. A theater and the Wolf Valley Cornet Band provided entertainment. Travelers patronized three hotels and five restaurants. Residents could attend any one of three churches, and children attended a large school building.

Like most rural centers, Gage suffered a decline in the World War I years, but the ideally located railroad town remained viable, as it was some distance from towns of any size. Newspapers serving the residents have included the Ellis County Advocate, the Ellis County Republican, the Gage Banner, and the Gage Record, with the latter continuing in existence at the end of the twentieth century. In 1920 the town had 804 inhabitants.

Petroleum exploration came to the Gage area in 1917, bringing jobs. When a well drilled on the C. J. Minton farm produced only artesian water, the landowner created a swimming and boating area for the public. The city acquired Gage Artesian Beach in 1939, constructed a bathhouse and boat dock, and continued to operate the park through the twentieth century. Because the terrain was flat and the weather good, the U.S. Army maintained a 720-acre training field for bomber pilots outside Gage during World War II. In the 1940s and 1950s Gage supported two dozen retail stores, gasoline stations, and other commercial establishments. The 1940 census recorded 684 inhabitants, and the 1960 census, 482.

After paved highways allowed commuting to jobs in Woodward and Shattuck, Gage's population rose to 536 and 667 in 1970 and 1980, respectively. Folk artist Jim Powers, whose "junk yard art" is created in welded metal, makes Gage his base of operations. The Bank of Gage building is listed in the National Register of Historic Places (NR 83004169). Ranching and farming are still the community's economic mainstay. A commercial airport continued to operate in 2000, using the former military runways. In 1904 National Weather Service established a regional climate station at Gage, and the station served the Civil Aviation Authority/FAA at the airport from 1939. The FAA portion of the facility moved to McAlester in the 1990s, but the weather service maintained an unmanned station at the Gage location, which by 2004 had been gathering weather data for a century. After declining to 473 in 1990, Gage finished the twentieth century with a population of 429 and in 2010 had 442 residents.

The following (as per The Chicago Manual of Style, 17th edition) is the preferred citation for articles:
Dianna Everett, “Gage,” The Encyclopedia of Oklahoma History and Culture, https://www.okhistory.org/publications/enc/entry.php?entry=GA001.