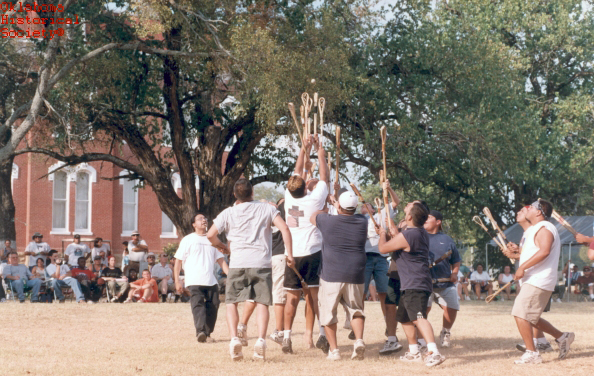 The traditional games played by American Indian peoples in present Oklahoma have ancient histories and still remain central to the cultures and identities of many groups. Among a number of eastern tribes, including the Yuchi, Shawnee, and Delaware, a distinctly Native form of "Indian football" is played by men against women. This important community ritual is associated with springtime. Similarly, Southeastern tribes, including the Creek, Seminole, and Cherokee, play "stickball" as a gendered contest. Men use paired racquets to toss a small ball toward a target placed atop a tall pole; the women throw and catch the ball with their hands. The same racquets are used in a men-only game similar in form to lacrosse. These three eastern Indian games are all embedded in broader ritual and religious contexts, forming part of local communities' ceremonial calendars. In addition to these contests of ceremonial importance, games of chance and skill also play a role in the traditional religious life of Woodland communities. For instance, the seed dice game figures in the ceremonies of the Seneca-Cayuga, Shawnee, and other groups. In this game, marked seed dice are tossed for points in a contest between halves of the local community.

Among the Native peoples of central and western Oklahoma, the contest known as "hand game" is important. While not always played in ritual contexts, hand game is always an elaborate performance, accompanied by drumming and singing. Teams take turns hiding one or more objects clasped in the hand and then guessing the location. In this difficult game of skill and chance, teams develop elaborate strategies based on probability and a kind of good-humored psychological warfare, seeking to mislead and confuse their opponents. In some communities, such as among the Pawnee of the early twentieth century, hand game became associated with ceremonial activities such as the Ghost Dance. The game is also played in secular contexts and in tournaments between rival community-based teams. Among some groups, hand game or the related moccasin game is traditionally associated with funeral wakes.

The full range of traditional games played for fun in the present and in the past by Oklahoma Native people is great and can only be surveyed here. Among the better known are "shinny," a woman's game similar to field hockey, and various forms of "hoop and pole," in which a wooden ring is rolled and participants seek to throw a pole or spear through it as it moves. The Cherokee are renowned for the preservation of traditional games, including a unique form of "marbles." They host blowgun contests each year at the Cherokee National Holiday and share with many Oklahoma groups a passion for archery contests. The latter are especially common in eastern Oklahoma in the fall.

Many games adopted from European-American traditions have become central to American Indian community life in Oklahoma. Of team sports, baseball was probably the most popular into the later twentieth century, after which time co-ed softball became the preeminent focus of enthusiasm and local rivalry. While played in an array of institutional frameworks, the locally organized Indian tournament is the most long-standing and central to Native life. These events draw local, regional, and sometimes national teams. The greater the prize money offered and the larger the number of teams involved, the greater the distances that teams are willing to travel to participate. Oklahoma has regularly hosted major events, but smaller-scale contests continue to be organized throughout the state. Tournaments are often linked to larger Native events such as tribal festivals. In some parts of Oklahoma co-ed volleyball tournaments, modeled on those established for softball, grew in popularity, becoming established features of Native life in the 1990s. This may be because softball tournaments became larger and more complex to organize, thus creating a place for a smaller-scale activity like volleyball, which can be easily organized in local community contexts. It also reflects volleyball's growing popularity in the United States.

Among the games of chance adopted from non-Native sources and turned into a distinctly Indian practice is the "cakewalk." As practiced in Oklahoma's Indian Country, a cakewalk is a contest held in conjunction with a larger community event, usually an indoor dance or festival. The prize is a cake, donated by the members of the organizing group. In the cakewalk's full, modern form, paper plates are numbered sequentially and placed in a circle in an open area. Participants, usually children, pay a small fee to play. In the fashion of musical chairs, they move in a circle, and when the music stops, each stands on a plate. A number is drawn, and the child on the winning plate chooses a cake. Many rounds will be played, and afterward the plates are sold to adults for use as raffle cards. Over the course of the dance, numbers will be drawn, and the holder of the winning plate will select a cake. In Indian communities, cakewalking, along with "box suppers," represents an active retention of a shared folkway now less widely practiced by other Oklahomans.

Games have always played a diverse and important role within Native groups, and they have also provided a means by which communities link themselves to one another and into larger social networks. As in other areas, American Indians are actively carrying on long-standing game traditions, creatively appropriating and adapting games from elsewhere, and participating fully in the larger fabric of multiethnic Oklahoma. They engage as fans and players in the state's athletic teams and participate in the same games, from dominoes and video games to company-picnic sack races that are enjoyed by their non-Native neighbors.

The following (as per The Chicago Manual of Style, 17th edition) is the preferred citation for articles:
Jason Baird Jackson, “Games, American Indian,” The Encyclopedia of Oklahoma History and Culture, https://www.okhistory.org/publications/enc/entry.php?entry=GA006.