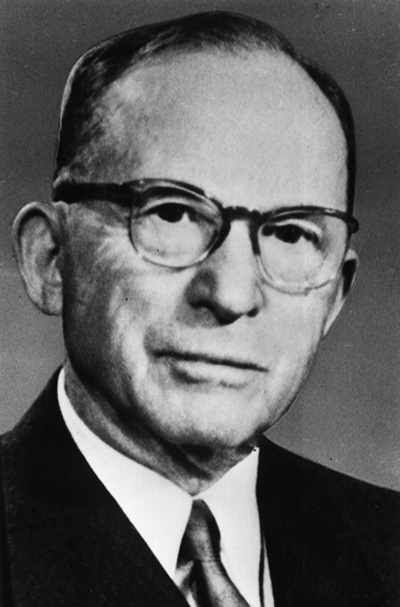 Oklahoma City newspaper publisher and civic leader Edward King Gaylord was born on March 5, 1873, in eastern Kansas. Son of George Lewis and Eunice Edwards Gaylord, E. K. Gaylord grew up and was educated in Colorado. At age eighteen he attended Colorado College in Colorado Springs, and his older brother Lewis suggested they purchase the Colorado Springs Telegraph. The Gaylord brothers later sold the paper. Lewis Gaylord bought the St. Joseph (Missouri) Dispatch and convinced E. K. to work for him as business manager.

However, E. K. Gaylord wanted his own newspaper. Following the advice of a well-known Chicago publisher, he visited Oklahoma City in December 1902 and liked the young town. He met Roy E. Stafford, who agreed to sell him and two newspaper friends a minority interest in the Daily Oklahoman. Gaylord became business manager. In 1918 Stafford sold his controlling interest to Gaylord, under whose leadership the paper grew and prospered.

While building the Daily Oklahoman into a statewide newspaper, Gaylord was active in civic matters, in the statehood movement, and in moving the state capital from Guthrie to Oklahoma City. He was responsible for taking a small experimental radio operation and building it into the state's first major radio station, WKY. Later he established the state's first television station, WKY-TV. In addition to journalism and broadcasting his business interests included real estate and oil.

In 1930 Gaylord was inducted into the Oklahoma Hall of Fame. At age ninety in 1963 he was honored by Oklahoma City's civic leaders as "the father of Oklahoma." Five years later the Oklahoma House of Representatives passed a resolution designating him "the Dean of American Newspaper Publishers." When he celebrated his hundredth birthday on March 5, 1973, he was invited to address a joint session of the Oklahoma Legislature. A year later, on May 30, 1974, Gaylord died at his Oklahoma City home after a full day's work at the office. He had married Inez Kinney of New York City in 1914. The union produced three children: Edith, Edward, and Virginia.

The following (as per The Chicago Manual of Style, 17th edition) is the preferred citation for articles:
David Dary, “Gaylord, Edward King,” The Encyclopedia of Oklahoma History and Culture, https://www.okhistory.org/publications/enc/entry.php?entry=GA025.