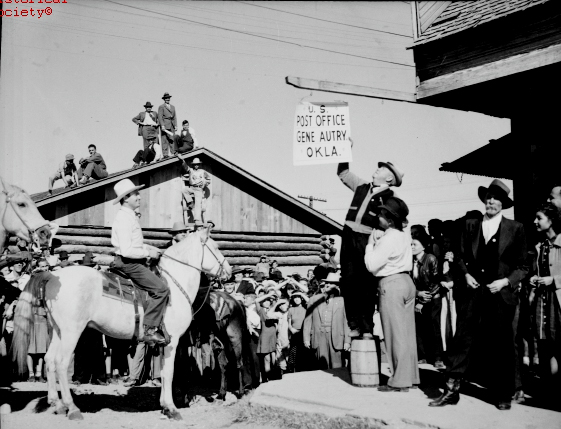 An incorporated community in eastern Carter County, Gene Autry is situated south of State Highway 53, seventeen miles northeast of Ardmore and ninety-five miles south of Oklahoma City. The town was originally called Lou, but its name was changed three times between 1883 and 1941. Its present designation honors cowboy film actor and singer Orvon Gene Autry, who bought a nearby ranch in 1941.

A store opened just east of present Gene Autry during the 1870s, in what was then the Chickasaw Nation, Indian Territory. A post office, designated Lou, was established inside the shop in July 1883. The mail room was moved four months later and renamed Dresden. When the Gulf, Colorado and Santa Fe Railway bypassed Dresden in 1887, residents relocated to the track. They called their new townsite Berwyn.

Berwyn developed as a farming community. Early businesses included a feed mill, a flour warehouse, two cotton gins, a grain elevator, various stores, and the Berwyn Light newspaper. The town's population rose from 276 in 1900 to 378 in 1910. That number peaked at 435 in 1920 and declined to 300 in 1930.

Gene Autry purchased the 1,200-acre Flying A Ranch west of Berwyn in November 1941 to serve as headquarters for his traveling rodeo. Berwyn was renamed "Gene Autry" in his honor. An estimated thirty-five thousand people attended the ceremony on November 16, 1941. Those present included Autry and Oklahoma's governor, Leon Phillips. After the outbreak of World War II Autry enlisted in the U.S. Army Air Corps and subsequently sold his Flying A Ranch.

The following (as per The Chicago Manual of Style, 17th edition) is the preferred citation for articles:
Jon D. May, “Gene Autry (town),” The Encyclopedia of Oklahoma History and Culture, https://www.okhistory.org/publications/enc/entry.php?entry=GE003.