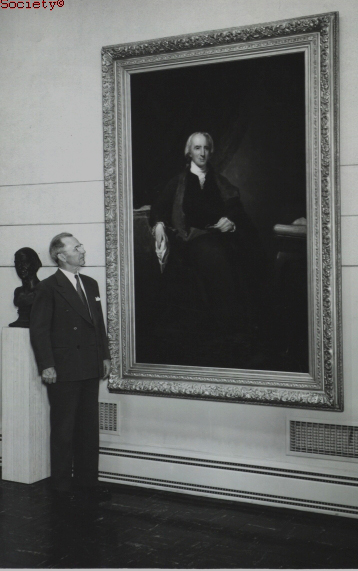 An oilman and the founder of the Thomas Gilcrease Institute of American History and Art of Tulsa (Gilcrease Museum), William Thomas Gilcrease, the eldest child of William Lee Gilcrease and Mary Elizabeth Vowell, was born February 8, 1890, at Robiline, Louisiana. A Creek, he was affectionately called "Indian Tom."

After Gilcrease's birth his family moved to the Creek Nation, Indian Territory, and eventually settled at Wealaka. As a result of the Dawes Commission allotment process, Gilcrease received 160 acres near present Glenpool in 1899. His Creek blood was through his mother; his father was non-Indian. Gilcrease's sons, Thomas, Jr., and Barton, were of Creek and Osage descent as a result of his marriage in 1908 to Belle Harlow, an Osage. His second marriage, in 1928, to Norma Smallwood, Miss America of 1926, produced a daughter, Des Cygne.

Gilcrease's brief formal education revolved around rural one-room schools, a semester at Bacone College, and the Kansas State Teacher's College, Emporia. An early role model and teacher at Bacone was Alexander Posey, who instructed his students in the arts, sciences, writing, and, most importantly, their American Indian heritage. He taught Gilcrease about the Trail of Tears and Indian leaders such as Sequoyah and Sitting Bull, about how to make bows and arrows and to hunt, and about the operations of the Creek National Council at Okmulgee.

Discovery of the Glenn Pool Oil Field in 1905 propelled Gilcrease into the oil industry. His allotment had thirty-two producing oil wells by 1917. Once he was financially secure, Gilcrease was able to fulfill his personal philosophy that "every man must leave a track and it might as well be a good one." His interest in fine arts and petroleum led him to study in Europe; there he mastered French and Spanish and became versed in geology. During his life Gilcrease was a rancher, farmer, cowboy, banker, oilman, storekeeper, and collector of American Indian art and artifacts. In May 1956 he received an honorary doctorate of arts and letters from the University of Tulsa.

Gilcrease founded the Gilcrease Oil Company in 1922 and discovered a new oil-producing strata, named the Gilcrease sand, near Wetumka. His company brought in numerous wells in Oklahoma, Texas, and Kansas. He also obtained controlling interests in the Fourth National Bank of Tulsa, the Bank of Bixby, the state banks of Coweta and Wagoner, and a large bank in Stillwater.

Gilcrease's desire to acquire art and a comprehensive record of American Indians, from the prehistoric to modern period, sent him on collecting tours in Europe. In 1912 he purchased his first painting, titled Rural Courtship, by Daniel Ridgeway Knight. His remaining years involved planning, financing, and personally excavating Indian archaeological sites in the United States and Mesoamerica.

The Thomas Gilcrease Foundation was formed in 1942 to gather, maintain, and preserve materials promoting and understanding the American Indian. In 1943 Gilcrease opened his first museum; it was situated in San Antonio, Texas. In 1949 he constructed a building in Tulsa to house his collection adjacent to a residence he had purchased in 1913. The cultural assemblage grew to include ten thousand works of American Indian and related art, 250,000 artifacts, and 100,000 rare books. The Thomas Gilcrease Institute of American History and Art's collection was presented to the people of Tulsa in 1955, with the provision that the museum be "devoted to the free public enjoyment of the artistic, cultural and historical record of the American Indian."

Upon Gilcrease's death in Tulsa on May 6, 1962, his funeral was conducted by Chief Wolf Robe Hunt, a Delight Maker from the Acoma Indian Reservation in New Mexico. After a prayer, corn meal was sprinkled to provide food for Gilcrease's journey, and arrows were shot into the air to seal his spirit against evil on the way to She-Pa-Po, the happy hunting ground. Gilcrease was buried in a private mausoleum on his Tulsa home and museum property.

The following (as per The Chicago Manual of Style, 17th edition) is the preferred citation for articles:
Burl E. Self, “Gilcrease, William Thomas,” The Encyclopedia of Oklahoma History and Culture, https://www.okhistory.org/publications/enc/entry?entry=GI005.