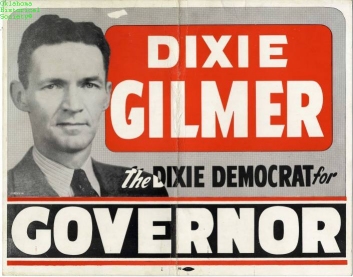 Born on June 7, 1901, in Mount Airy, North Carolina, U.S. Rep. William Franklin "Dixie" Gilmer was the son of W. F. and Emma Prather Gilmer. In 1903 the Gilmer family moved to Ardmore, Indian Territory. There they operated the Gilmer Hotel, the city's first hostelry. The elder Gilmer served in Oklahoma's Second Legislature and authored the bill establishing the Confederate Veterans Home in Ardmore. By 1910 the family relocated to Oklahoma City.

Educated in public schools, young Gilmer became interested in politics at an early age while serving as a page for several years in the Oklahoma Legislature. In 1914 he was the personal page to Speaker James B. "Champ" Clark in the U.S. Congress. Following his high school graduation in 1918, he taught in Helena. In 1920 he enrolled in the University of Oklahoma, receiving a law degree in 1923. Admitted to the bar that year, he opened a law office in Wetumka and also served as a police judge and mayor. In 1927 Gilmer represented Hughes County in the Eleventh Legislature. A year later the young attorney married Ellen McClure of Celeste, Texas; they had no children. By 1929 Gilmer had moved to Tulsa, and he practiced law, supplementing his income by working as a service station attendant.

From 1931 to 1933 Gilmer served as an assistant county attorney in Tulsa County and in 1936 was elected Tulsa County attorney, a position he held for five terms. Interestingly, when he filed for his first election in 1936, he registered as "W. F. (Dixie) Gilmer Jr." State law prohibited candidates using nicknames. Gilmer's father came to his son's aid and produced the family Bible, which proved that he had been baptized "Dixie." Henceforth, young Gilmer campaigned as "the Dixie Democrat" and few knew him by any name other than Dixie. Gilmer said that he acquired the nickname Dixie because his father had been born on April 12, 1861, the date that Fort Sumter, South Carolina, was fired upon.

Called a "fiery" prosecutor, Gilmer especially made a name for himself by indicting seven state officials for allegedly rigging prices for public school textbooks. The charges were later dropped due to the lack of jurisdiction. Because he was popular, he entered the Democratic primary as a candidate for governor in 1946. Described as "Tulsa County's courageous prosecutor with a fighting heart and a name which smacks of magnolia blossoms," he campaigned for honesty in state government and called for a modernization of Oklahoma laws. He lost in the runoff to the eventual gubernatorial winner, Roy J. Turner.

In 1948 Gilmer defeated the Republican incumbent, George B. Schwabe, to represent Oklahoma's First District in the U.S. House of Representatives. In fact, that year the Oklahoma delegation consisted entirely of Democratic Party members for the first time in a decade. During his one term in office Gilmer served on the Judiciary Committee. Unfortunately, he had tuberculosis and spent much of his congressional career in the Walter Reed Hospital, and Schwabe regained the seat in 1949.

When Gilmer returned to Oklahoma, Gov. Johnston Murray named him Tulsa County tag agent. In 1951 the governor appointed him commissioner of public safety. During his short tenure Gilmer implemented several improvements, including the use of radar to help eliminate traffic accidents. On June 9, 1954, Gilmer died in Oklahoma City from complications of his long-term lung ailment. He was interred in Memorial Park Cemetery.

The following (as per The Chicago Manual of Style, 17th edition) is the preferred citation for articles:
Carolyn G. Hanneman, “Gilmer, William Franklin,” The Encyclopedia of Oklahoma History and Culture, https://www.okhistory.org/publications/enc/entry.php?entry=GI008.