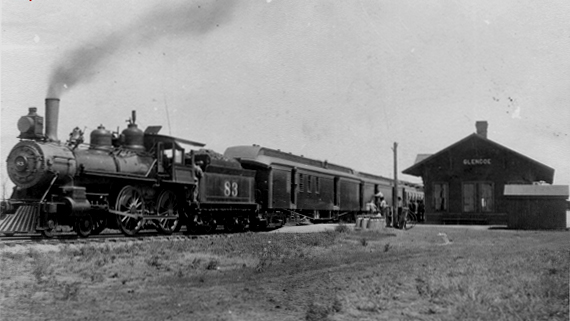 Glencoe, in northern Payne County, is located seven miles east of Stillwater on Highway 51 and eight miles north on Highway 108. The town began with the building of the Eastern Oklahoma Railway through Payne County. A post office named Glenco was officially established on December 6, 1899, and town lots were sold on April 15, 1900. J. Hunter Williams, editor of the Glencoe Mirror, was named postmaster on January 4, 1901. He persuaded the U.S. Post Office Department to change the spelling of the town's name to Glencoe, after a pass in Scotland where soldiers under Captain Campbell had massacred the McDonalds. However, not all of the town's residents have agreed with that explanation for the name, and various alternative explanations have been offered.

Although the railroad provided the incentive for the town's founding, agriculture was the mainstay of the local economy, with Glencoe serving as a trading center for the area. Crops included wheat, cotton, corn, livestock, and later alfalfa. The town had two banks, two cotton gins, an elevator, hardware store, general store, two drug stores, three groceries, two doctors, an optician, a lumberyard, livery barn, hotel, pool hall, and butcher shop. The 1910 population numbered 373 people. On January 22, 1914, a devastating fire swept through downtown Glencoe, almost entirely destroying the business district. Some of the businesses were rebuilt, but the town's future growth was stunted by the fire. An attempted middle-of-the-night robbery of the Glencoe State Bank in 1946 resulted in the death of one of the robbers and the arrest and conviction of two others. Bank cashier Clarence McGinty, son of Roosevelt Rough Rider Billy McGinty, helped foil the robbery.

The following (as per The Chicago Manual of Style, 17th edition) is the preferred citation for articles:
Carla S. Chlouber, “Glencoe,” The Encyclopedia of Oklahoma History and Culture, https://www.okhistory.org/publications/enc/entry.php?entry=GL005.