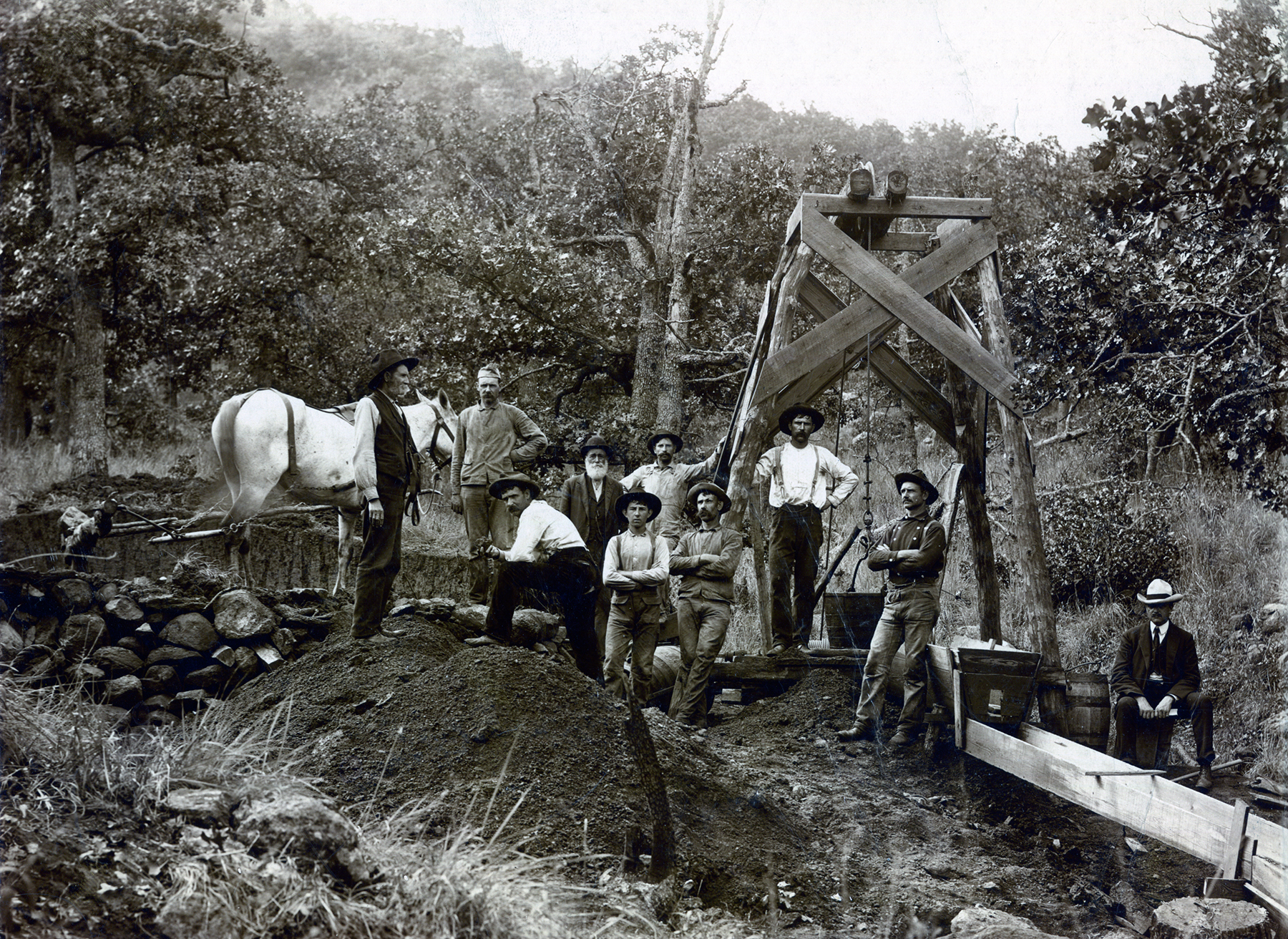 The Campbell Mine on the north side of Mount Scott
(4129, Frederick S. Barde Collection, OHS).

Beginning with the earliest European exploration of Oklahoma, mineral wealth, particularly gold, held a special interest. As early as 1765 Spanish mining activity existed in the Wichita Mountains in the southwestern portion of the state. But folklore recounts gold mines in McCurtain County of southeastern Oklahoma, as well as in the area east of present Grand Lake, and even in the Arbuckle Mountains in the south-central part of the state. Tales of buried Spanish gold abound, ranging in location from the Great Salt Plains in the western part of the state to the forks of the North and South Canadian rivers near Eufaula. Even Jesse James reputedly buried some of his stolen gold at various spots within the state. Through the romantic haze of all those golden dreams, the only area of proven gold production lies in the Wichita Mountains.

Beginning around 1890 prospectors found abandoned Spanish mine workings and evidence of considerable gold, silver, and copper mineralization in the Wichita Mountains area. By 1895 a full-fledged gold rush was underway in that region, which lay in the restricted area of the Kiowa-Comanche-Apache Reservation. The U.S. Army and the Indian police fought a losing battle to keep these interlopers out between then and 1901 when the reservation was opened to general settlement. Between 1901 and 1910 a massive amount of gold prospecting occurred. More than two thousand mining claims were filed and a dozen or more small smelters built. Mine shafts ranged from a few feet in depth to more than two hundred feet beneath the surface, and reported ore values fluctuated wildly from less than a dollar to more than six hundred dollars per ton, with estimated processing costs ranging around five dollars per ton. Thousands of prospectors entered the Wichitas, and a number of towns, including Wildman, Meers, Golden Pass, Craterville, Oreana, Hollis, and Doris, sprang up. Granite, with its access to the railroad, served as the main distribution point for men and material.

Despite all the time, money, and labor put into it, gold mining in the Wichitas was doomed to failure. Only isolated pockets of ore had high assay values, and the overall value of the ore per ton did not warrant large-scale production. Further, the surface veins proved to be of small size and quickly pinched out at shallow depths. In its 1916 report on the state's natural resources, the Oklahoma Geological Survey noted that "much prospecting has been done in Oklahoma for gold and silver. The search has been carried on for years, and up to the present time not enough has been found to be of any economic value." It went on to say that, "many people have been induced to invest in stock selling schemes and fake prospects without any returns on their money." Since the publication of that 1916 report on gold mining in Oklahoma, little has occurred to change its conclusions.

The following (as per The Chicago Manual of Style, 17th edition) is the preferred citation for articles:
Bobby D. Weaver, “Gold,” The Encyclopedia of Oklahoma History and Culture, https://www.okhistory.org/publications/enc/entry.php?entry=GO003.