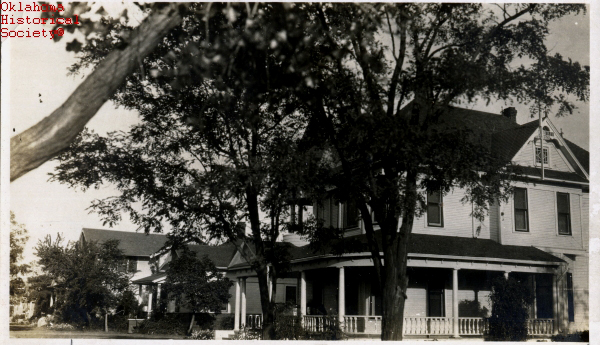 Located on U.S. Highway 54, ten miles southwest of the county seat of Guymon in Texas County, Goodwell officially became a town with the coming of the Chicago, Rock Island and Pacific Railway (CRI&P) circa 1902. A post office was established on June 16, 1903. Railroad workers gave the name Goodwell to the new town because good water came from a well that had been dug on the townsite for use by the railroad. By 1908 the town was thriving, and businesses included a grocery store, a coal and feed store, two hotels, a telephone company, a real estate office, an implement store, two general stores, a physician, a blacksmith shop, a butcher shop, a feed mill, and livery stables. There were no saloons. Early homes consisted of dugouts, tents, and shacks, with trails for streets and boardwalks for sidewalks. Goodwell had an estimated population of 107 in 1909.

Early churches included the Methodist Church, organized February 7, 1904, the Baptist Church, established August 20, 1904, and the Church of Christ, started shortly thereafter. At the turn of the twenty-first century all three had student centers to serve Oklahoma Panhandle State University students with lunches as well as provide for their religious needs. The establishment of a secondary district agricultural school in 1909 boosted the town's population to an estimated 350 by 1918. The school held its first session in the First State Bank building, which now serves as an office building on campus. By 1921 this institution had become Panhandle Agricultural and Mechanical College. In 1967 the name was changed to Oklahoman Panhandle State College of Agriculture and Applied Science and in 1974 to Oklahoma Panhandle State University (OPSU). Located just west of Goodwell, it draws students from the surrounding states.

Through the years numerous organizations have benefited the community. Some of these were the Girl Scouts, the Goodwell Lions Club, the Goodwell Masonic Lodge Number 521, the Goodwell Riding Club, the Goodwell Farm Women's Home Demonstration Club, and the OPSU Rodeo Team. The first newspaper, the Goodwell News,began on April 9, 1908. Later newspapers were the Goodwell Independent and the Goodwell Sentinel. The CRI&P has been the main influence on both the formation and continuation of the town. In addition to transporting homesteaders to the area, at one time six passenger/mail trains passed through Goodwell each day. The railroad was big business until the company began to have financial difficulties in the 1950s. The line was taken over by Cotton Belt system and in 1988 by the Union Pacific Railway.

The first federal census for Goodwell reported 501 residents in 1930. The number dropped to 360 in 1940 but rebounded, peaking at 1,467 in 1970, with 1,192 counted in 2000. At the turn of the twenty-first century Goodwell had twenty-nine businesses, as well as the Farmers Elevator, a wood-frame structure built in 1926. In 1930 a concrete elevator was added. Circa 2000 Bryant Riffe, great-grandson of one of the original owners, was manager of the business. The three original churches remained an integral part of life in Goodwell. Many of the residents are descendants of those original, hardy people who came in 1903–04. As do many of the longtime residents, many former university graduates feel a kinship with this little prairie town because it was an integral part of their lives when they were students. Located in Goodwell, the No Man's Land Museum has preserved local history. In 2010 the U.S. Census reported that Goodwell sheltered 1,293 inhabitants.

The following (as per The Chicago Manual of Style, 17th edition) is the preferred citation for articles:
V. Pauline Hodges, “Goodwell,” The Encyclopedia of Oklahoma History and Culture, https://www.okhistory.org/publications/enc/entry.php?entry=GO011.