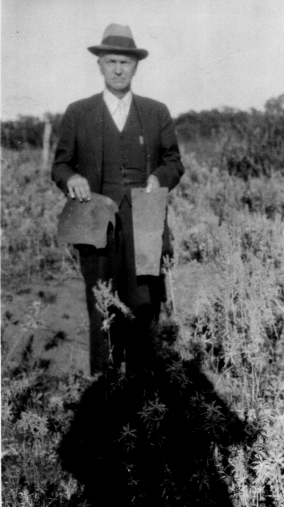 A geologist who founded the University of Oklahoma School of Geology and the Oklahoma Geological Survey, Charles N. Gould was born July 22, 1868, near Lower Salem, Ohio, to Simon Gilbert and Anna Arvilla Gould. In 1887 the family moved to Kingman County, Kansas, where young Gould attended college and taught in the local public schools prior to receiving a bachelor's degree in 1899 from Southwestern College in Winfield, Kansas. During this time he became interested in geology and enrolled at the University of Nebraska, receiving a master's degree in 1900.

Immediately upon graduating, he was hired by the University of Oklahoma and organized the college's geology department. He taught classes and began an aggressive series of field programs. In 1903 the Hydrographic Branch of the U.S. Geological Survey awarded him the project of surveying the underground water resources of the southern plains east of the Rocky Mountains. He performed this duty during free time from his university duties. He completed the monumental task between 1903 and 1907 and also found time to marry Nina Swan on September 24, 1903.He earned his doctorate from the University of Nebraska in 1906.

In 1908 Gould organized the Oklahoma Geological Survey and served as its first director until 1911. He then resigned to go into private business. For the next thirteen years, working primarily with the petroleum industry as a consulting geologist, he prepared reports on 572 properties and was responsible for numerous oil finds in Oklahoma, although his most famous discovery was the Panhandle oil and gas field in Texas. In 1924 he returned to the position of director of the Oklahoma Geological Survey and held that post until 1931. During this period the survey published twenty-three geological bulletins, among which was the three-volume Oil and Gas in Oklahoma, generally considered to be one of the most important documents on the state's petroleum geology.

Gould retired from his post in 1931. Four years later, in 1935 at the age of sixty-six, he went to work for the National Park Service as regional geologist over an eight-state region in the West and Southwest. For the next five years he advised the park service on water resources, road construction, and future expansion. Charles Newton Gould died in Norman, Oklahoma, on August 13, 1949. His pioneering legacy of more than 250 scientific papers and books on almost every aspect of Oklahoma geology established a basis for the study of that science in the state.

The following (as per The Chicago Manual of Style, 17th edition) is the preferred citation for articles:
Bobby D. Weaver, “Gould, Charles Newton,” The Encyclopedia of Oklahoma History and Culture, https://www.okhistory.org/publications/enc/entry.php?entry=GO016.